Most people love watching movies and what better way to enjoy your favorite flicks than in a themed home theater. So check out these awesome home theater designs and tell us which one you would love to have in your home. 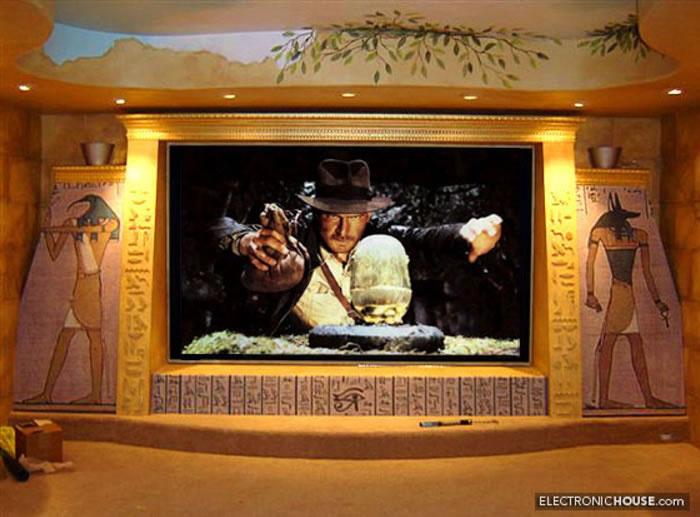 You don’t have to risk Nazis or snake bites to feel totally immersed in the world of Indiana Jones, just watch the movies in this amazing home theater themed after the franchise. Larry and Colleen Halliday worked with installer Doug Charrois to create this dream geek room loaded with movie memorabilia. 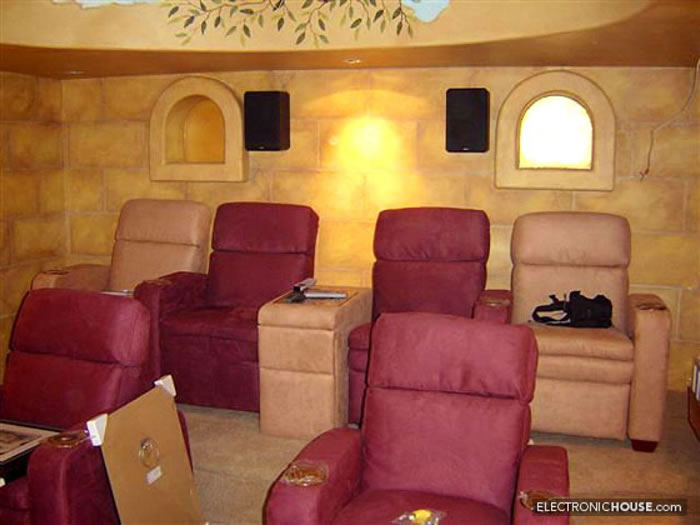 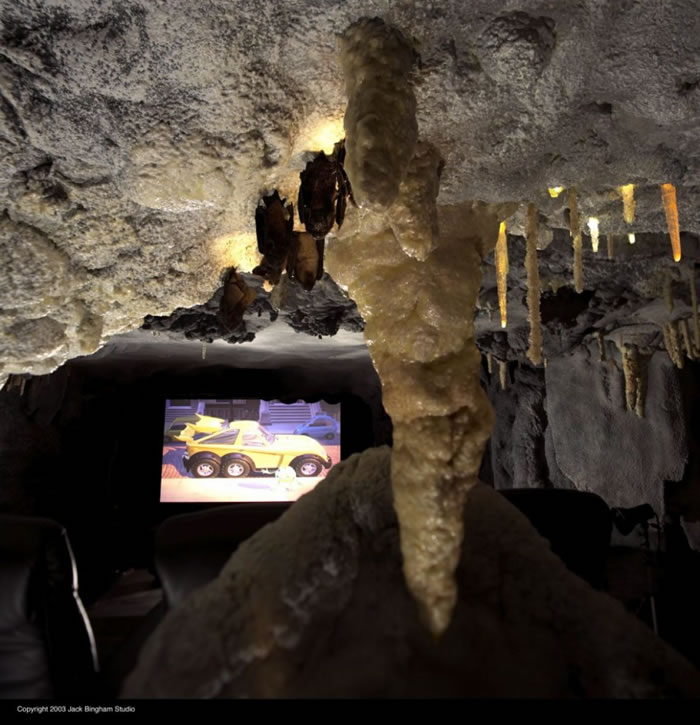 It’s batty what lengths some people will go to in order to celebrate their favorite geeky interests. Case in point, the Batcave home theater built by DC Audio Video Systems of New Hampshire that comes complete with stalagmites and hanging prop bats for that total feeling of cave immersion. 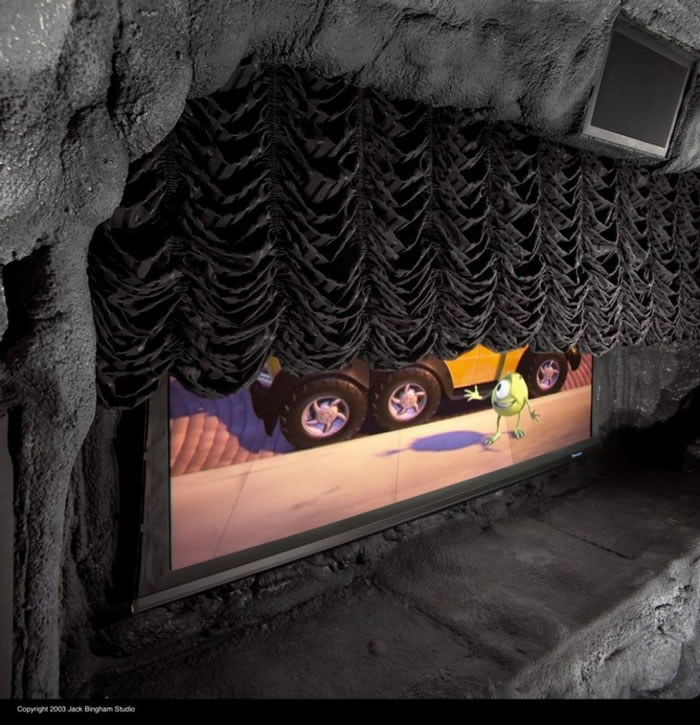 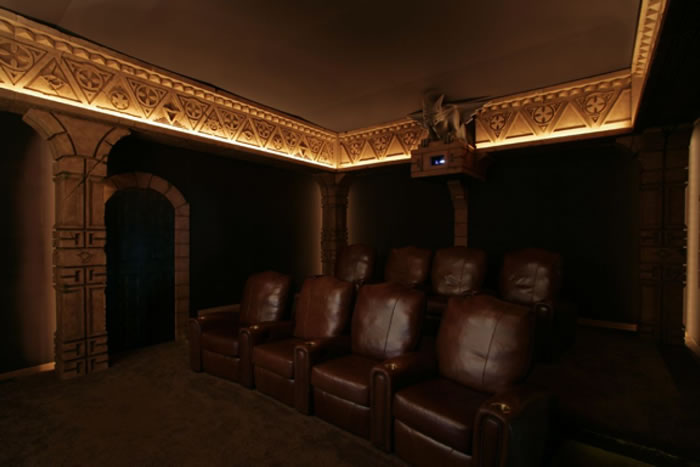 Admit One helped make the dream of a Tomb Raider theater a reality for one couple. Surprisingly, this amazing home theater isn’t in a mansion, but hidden inside an otherwise nondescript suburban home in Minnesota. 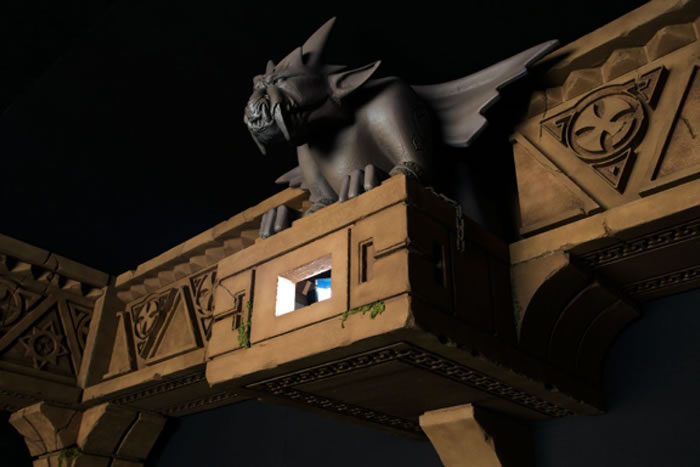 4. Pirates of the Caribbean Theme 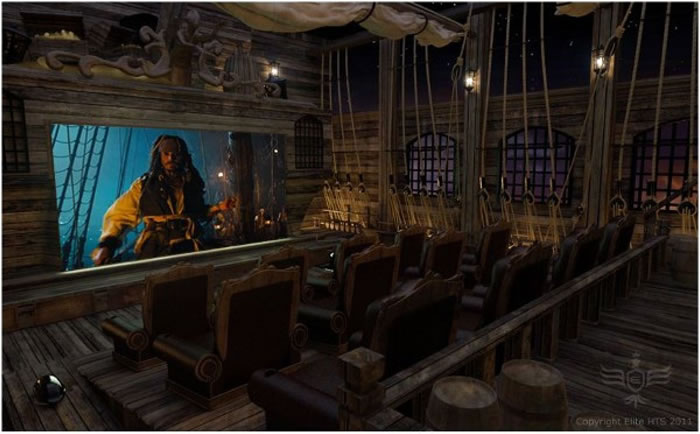 Yaarrrrr! If you ever dreamed you could join Captain Jack on the Black Pearl, this pirate-themed theater by Elite Home Theater Seating might just be the closest you’ll ever get. This specific theater hasn’t been completed yet, but even the computer models from this $2.5 million project look absolutely amazing. 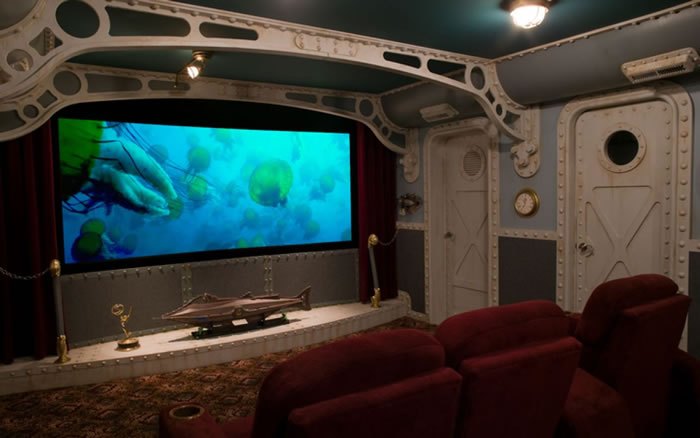 The Nautilus home theater was inspired by the ship of the same name in Jules Verne’s classic 20,000 Leagues Under the Sea. The impressive, steampunk-styled room was designed and fabricated by the great minds over at Goldberg Arts. 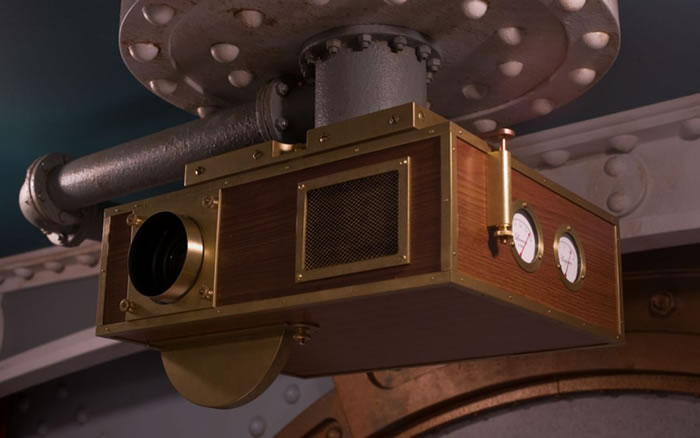 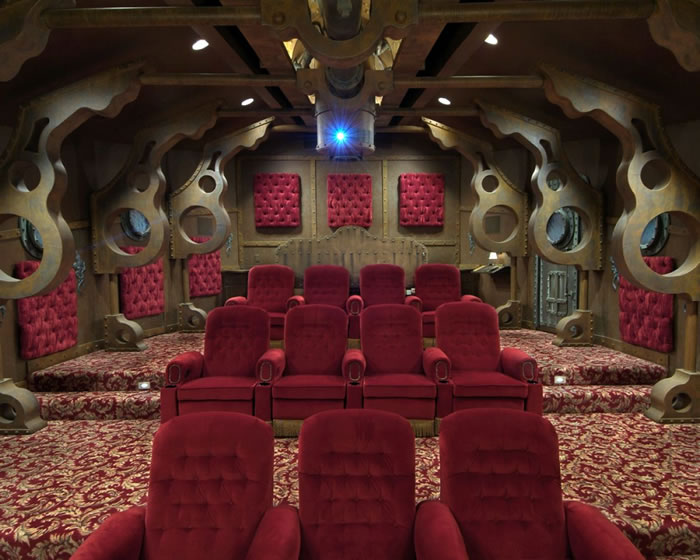 Jules Verne has a lot of fans, especially those in the steampunk community, so it’s no surprise that his works have inspired more than one home theater. Here is Dillon Works’ take on the Nautilus, with their take drawing a little more direction from the Disney version of the tale. 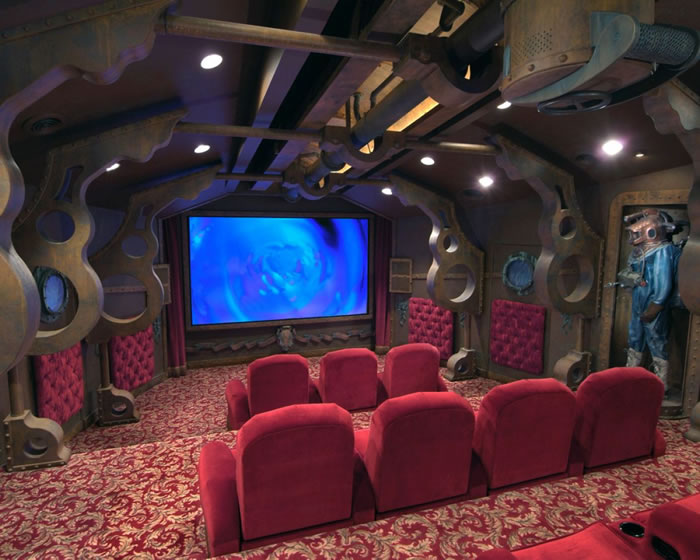 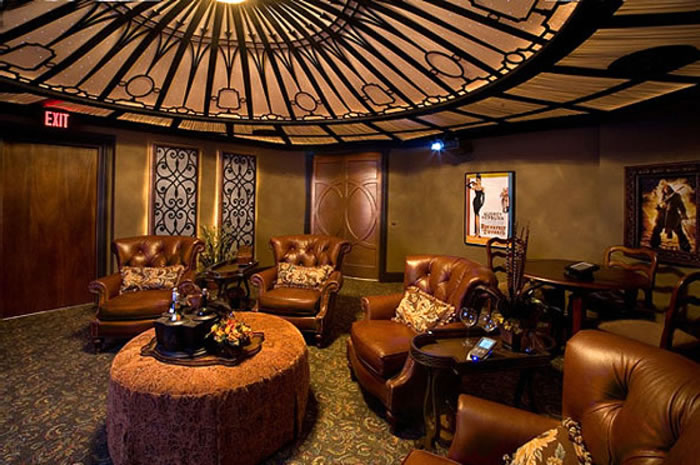 Titanic might not be on the top of the list when it comes to the most popular geeky movies, but it is still pretty darn cool and dedicated to have a whole home theater based off the James Cameron flick. Plus, the room, designed by Casa Cinema Design is beautiful enough to impress even those who don’t dig the movie. 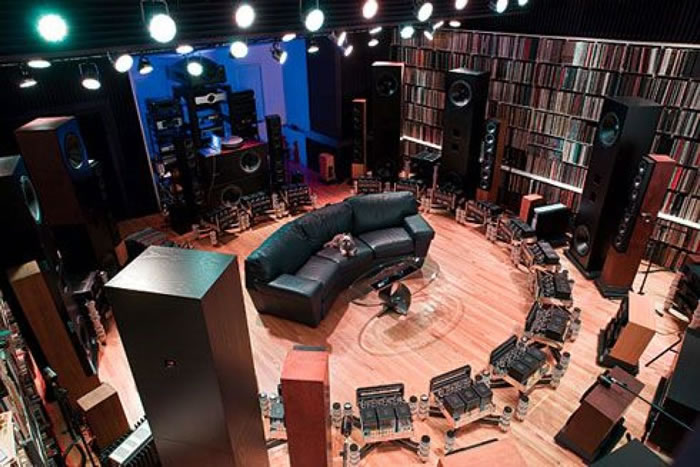 Jeremy Kipnis is a nerd focused on the tech side of things and it shows with his incredible, $6 million home theater. So what could possibly cost so much in one home theater system? Well, he has a massive Stewart Snowmatte laboratory-grade screen, an ultra-high-res Sony projector and an 8.8 channel system with sixteen 18-inch subwoofers. 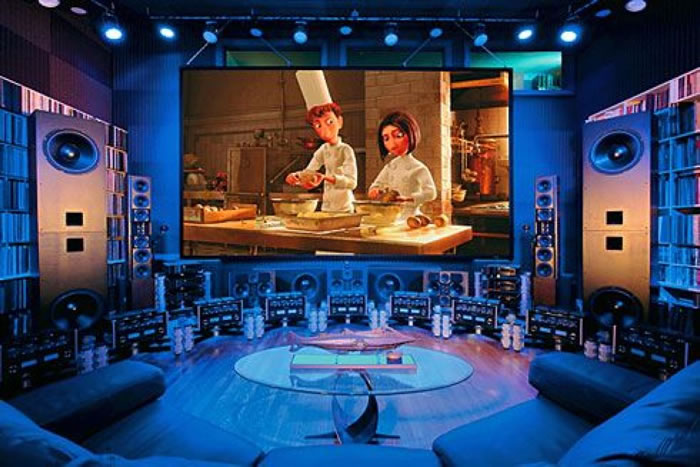 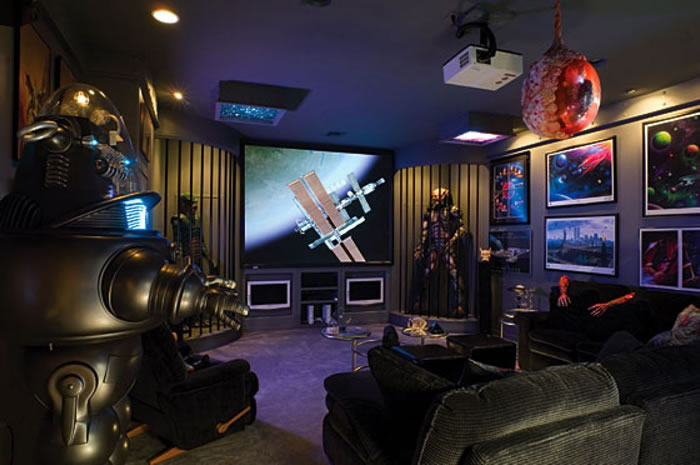 The actual design of this home theater isn’t particularly geeky, but what’s inside sure is. That’s because it features the impressive collection of movie monster and aliens belonging to Dr. David Winn. They aren’t all just statues either.

The Alien is automated with hydraulics and an air compressor so it can lurch out of the wall just as a burst of steam pops out of the ceiling vents. 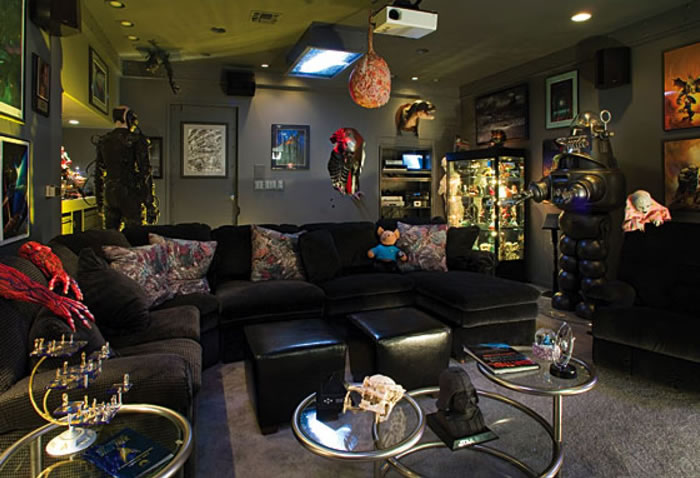 10. Genie in a Bottle Theme 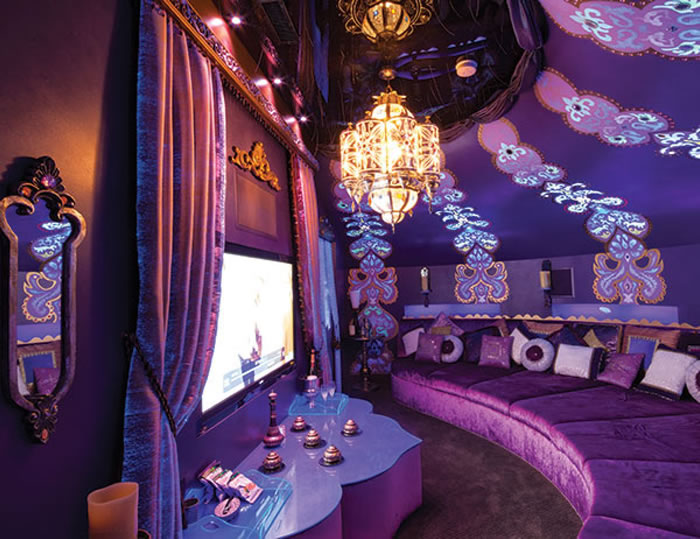 Whether you always loved Disney’s Aladdin, wished you could find your own genie in a bottle or just enjoy the style of the tales of the Arabian Nights, there’s certainly a lot to appreciate with this lovely home theater. A lot of companies worked together to make this project a reality, including Horner Networks, Amazing Design and Lutz Décor, but their experience and co-operation shows in the way every detail goes together in this themed room. 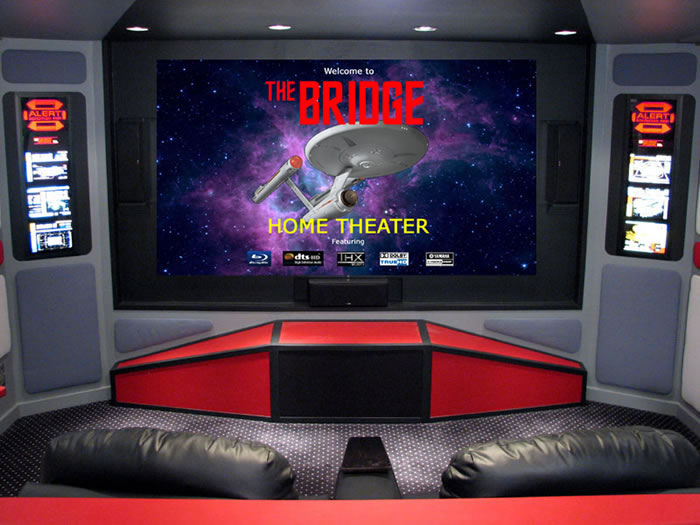 This Star Trek home theater is based on the bridge from the original USS Enterprise. This homemade project took 2 years to build and cost just 15’000, it certainly is a Trekies paradise. Read more about the Star Trek Themed Home Cinema here. 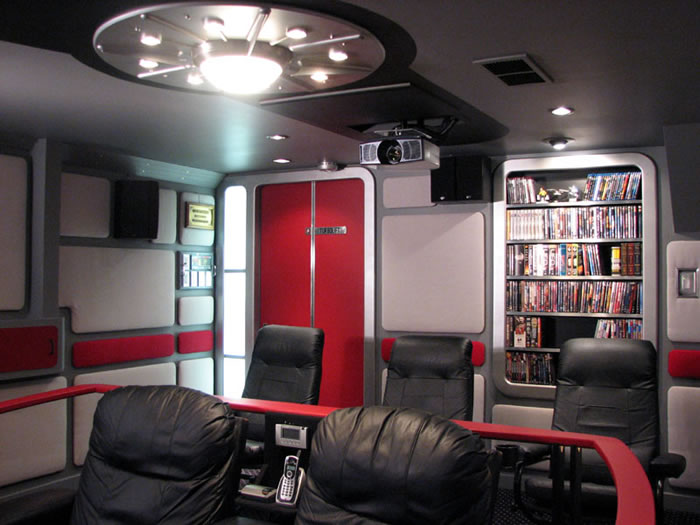 Which of these awesome home theater designs would you love to have in your home?