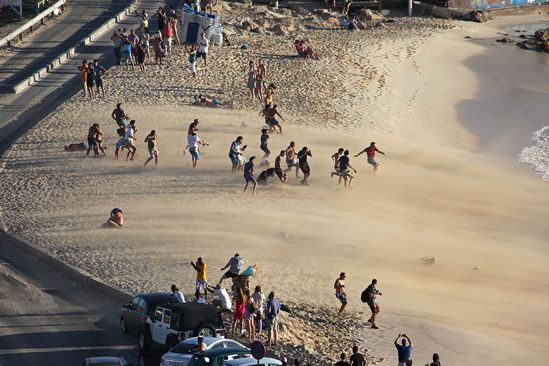 The Caribbean island of Saint Martin, Maho Beach is famous for low flying planes and take offs that blow tourists off the beach. Watch a Maho Beach plane take off here.

Located right next to the Princess Juliana International Airport, on the Caribbean island of Saint Martin, Maho Beach is a unique destination where tourist experience what it’s like to have jumbo jets flying just a few meters above their heads and get blown into the sea by their powerful jet engines.

Fine white sand and crystal clear water is not what makes Maho Beach such a popular tourist destination. There are hundreds of other such beautiful beaches in the Caribbean which aren’t located right next to a busy and noisy airport like Princess Juliana.

But it’s precisely this little detail that makes this piece of paradise so remarkably unique. In order to land safely on the unusually short Runway 10, aircraft pilots have to make their final approach at minimal altitude, and that means flying just a few meters above the heads of thrill-seeking beach-goers. And we’re not talking light airplanes either, but jumbo jets like Boeing 747 and Airbus A380. 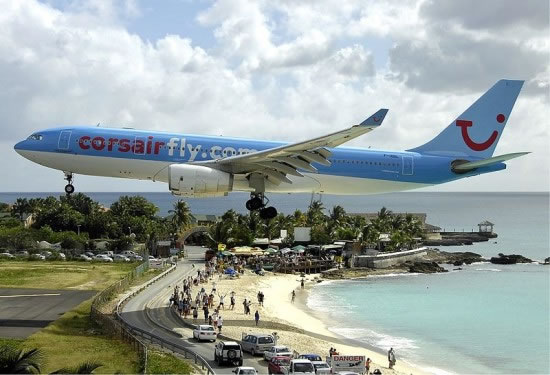 Plane spotting has become so popular at Maho Beach that local entrepreneurs have built an entire business around it. Beach bar owners have put up boards of airplane arrivals and departures so people can plan their visit, and some even broadcast radio transmissions between the airport’s control tower and the aircraft.

Having a jumbo jet flying so close over your head you can almost reach out and touch it is an experience unlike any other, but it’s not the only entertainment available at Maho Beach. Takeoffs from Runway 10 are also special.

As the aircrafts power their engines, the jet blast is so powerful it literally blows people off the beach. Despite the local government’s warnings that the blasts can result in “serious injury or death”, adrenaline junkies will stand on the beach trying to withstand the artificial hurricane, and sometimes even grab on to the fence and hang on for their dear lives.

An additional fence was recently added behind Runway 10, to discourage people from hanging on of the main one. The practice sounds like a disaster waiting to happen, but so far no fatalities have been reported. The last accident occurred in 2012, when a woman was blown away by the jet blast and hit suffered a deep cut to her forehead after hitting a concrete curb.