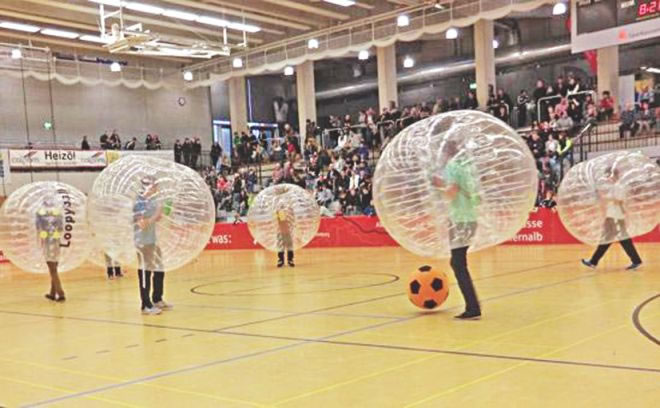 Bubble football is the new sport thats taking Europe by storm. It involves climbing inside a giant air bubble and trying to score a goal while everybody is trying to bump you out the way.

Bubble Football is the brainchild of Henrik Elvestad and Johan Golden, two wacky Norwegians who thought football would be even more entertaining if players were encased in clear plastic zorbing balls.

The first ever match was broadcast on Norwegian TV show “Golden Goal” at the end of 2011 as a gag, but after being posted on YouTube, the craze spread throughout Europe like wildfire.

In the last few years, bubble football matches have been held everywhere from Italy to Latvia, and there are now even online stores selling and renting equipment to anyone willing to try it.

Scoring goals is hard enough in normal football matches, but it’s almost impossible when you have an inflatable plastic bubble covering your entire upper-body. Your hands are locked in a fixed position, so you’re not able to use them for balance, but that’s exactly what makes bubble football so fun.

Opponents try to knock each other out by bouncing into one another to get possession of the ball but injuries are scarce as the balls offer plenty of protection. Bubble football is pretty tough to explain with words, but luckily we have a video showing two teams playing this crazy game.

So who is up for a game?