You got to see this to believe it. This Panasonic television stretches 152 inches and is the biggest television available today. Would you want something like this in your living room?

The largest plasma TV available to date is the enormous 152 inch Panasonic TH-152UX1 which not only displays images in great quality high definition but it also has the option for 3D.

Even though this television is for sale I doubt very much it would actually fit into many living rooms and even if you did squeeze it in ,how far would have to push your sofa back to actually see the whole screen.

But imagine what it would be like to watch your favorite movies on this enormous telly.

The world’s largest plasma TV is basically a bigger version of Panasonic’s HD 3D PDP which comes with a fifty inch screen and is constructed using a new super-efficient quadruple luminance efficiency technology which means it can achieve the same brightness as a conventional full-HD panel but in one-quarter of the amount of time, allowing it to keep up with fast moving 3D pictures.

Panasonic also claim that they have developed a unique technology which minimizes double images that appears when left and right eye images are switched alternately. This results in a 3D compatible plasma display that can display clear and smooth high-quality pictures. 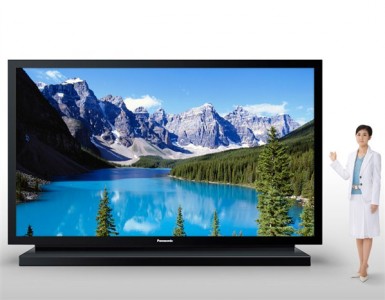 The Panasonic TH-152UX1 was first shown to the public at the Consumer Electronics Show in Las Vegas back in January 2010 and visitors to the show marveled at the immense 8.84 million pixel screen.

The price for the world’s largest plasma TV is estimated to be around half a million dollars and so if you have the space and funds why not contact Panasonic and purchase but for the rest of us I guess we’ll have to make do with a fifty inch or smaller.

Now you have discovered what is the largest plasma TV available for sale check out the video below to see how much work goes into delivering and installing such a huge television.

If you liked this story click the Facebook and Google + buttons below to share the article with your friends and tell us below in the comments box what size TV you would love to have sitting in your living room.