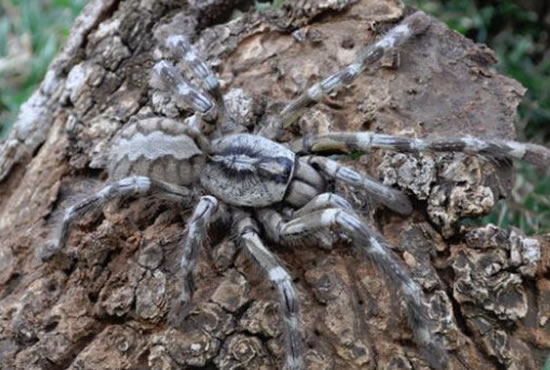 A new huge tarantula discovered in Sri Lanka, the highly venomous spider is said to have an 8 inch leg span.

Arachnophobes beware: scientists have found an enormous, previously undiscovered species of tarantula – said to be about the same size as a human face – in a remote village in Sri Lanka.

The species, which was discovered by the South Asian country’s Biodiversity Education and Research (BER) agency, has “unique daffodil-yellow markings” on its eight-inch long legs and a “distinctive pink band” around its body, according to Sky News reports.

It has been named Poecilotheria rajaei in honor of Michael Rajakumar Purajah, a local police officer who helped the researchers traverse a dangerous jungle in order to locate the spider.

A study describing the species has been published in the British Tarantula Society Journal. Tharaka Kusuminda, an undergraduate studying Export Agriculture at Sabaragamuwa University, is credited as the author of the study.

“Scientists first encountered the new tarantula in 2009, when villagers in northern Sri Lanka gave them the corpse of one that they had killed,” Colin Schultz of Smithsonian.com explained. “From there, the scientists went on a quest to find more, routing around in tree holes and bark peel with a foot-wide hand net.”

Their mission was to not just collect more individual representatives of the species, but specifically they were combing northern Sri Lanka for female and juvenile Poecilotheria rajaei. They eventually were able to locate enough spiders (including some of which were hiding in a hospital) to create a detailed description of the new species, said Nadia Drake of Wired.

“They are quite rare,” BER founder and survey-team leader Ranil Nanayakkara said in an interview with Wired. “They prefer well-established old trees, but due to deforestation the number have dwindled and due to lack of suitable habitat they enter old buildings.”

According to Sky News, Poecilotheria rajaei is believed to be a relative of a South American class of tarantula as the Goliath bird-eater, which is one of the largest spiders in the world. Though the colorful spider is venemous, its bite is not believed to be deadly to humans. However, it would reportedly be able to kill some larger animals, including mice, small birds, and some lizards and snakes, the UK news organization said.

Robert Raven, a spider expert at the Queensland Museum in Australia, told Drake he believes the survey team (which was led by BER founder Ranil Nanayakkara) did an “excellent” job describing the spider. He said while the information they have collected “will provide a good basis for establishing whether it is a good species,” he is not yet convinced that the arachnid they discovered is actually a new species.

Would you pick it up?