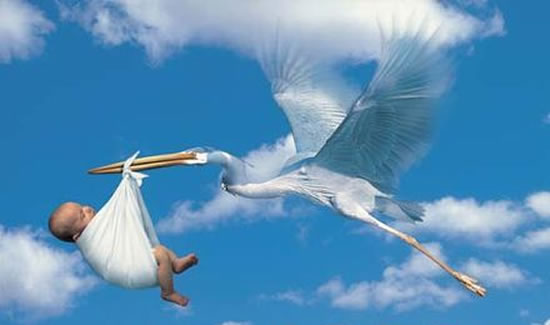 The myth has been around a long time but do you know why storks deliver babies?.

We all know how babies are made. The stork can be seen flying over rooftops with a little cloth bundle before landing at the doorstep of a happy couple who then unwrap their precious, smiling newborn—right? This myth was once a common story to tell children who were deemed too young to be told anything different.

Storks have been associated with babies and family for centuries. In Greek mythology, they were associated with stealing babies after Hera turned her rival into a stork, and the stork-woman attempted to steal her son. In Egyptian mythology, the soul of a person the “ba” was usually represented by a stork. The return of a stork meant the return of the soul, at which point the person could become animated again. In Norse mythology, the stork represented family values and commitment to one another.

In several mythologies, storks are also a symbol of fidelity and monogamous marriage because storks are widely believed to mate for life. In truth, they don’t actually mate for life, but do have a tendency to return to the same nests every year and usually mate with the same partner.

Storks are also represented in Chinese, Israeli, and various European cultures mythologies, but the association of storks bringing couples a newborn baby is believed to have started in Germany several hundred years ago.

The natural behaviour of storks lends a clue to their association with birth. As a migratory bird, white storks would fly south in the fall and return to Europe nine months later. Usually they could be seen heading north and nesting around March and April. Babies born in March and April were likely conceived in June of the previous year. Midsummer’s Eve, which takes place on June 21, is a celebration of the summer solstice, but it is also a pagan holiday of marriage and fertility. As many marriages and other couplings would take place during this time, many babies would be born around the time that the storks could be seen flying north, making the connection that the “stork brought the baby.” The symbolism of their migration pattern combined with their history in myths and legends probably contributed to the popularity of the story today.

Hans Christian Andersen popularized the fable in The Storks, a short story he wrote in the 19th century. In the story, storks flying above a village are teased by a young boy and get their revenge by delivering a dead baby to the child’s family. In this version of the story, the storks plucked babies from a pond where they were dreaming, to deliver them to families of good children. Another popular version of the story was that babies were found in caves called Adeborsteines—which, in German, literally means “stork stone.” Adeborsteine can also refer to stones from which babies would “hatch”; black and white stones that children threw over their heads to tell the storks that they wanted a sibling; or stones that babies were laid upon to dry after they were pulled from the sea.

The story was likely spread due to the perceived, and slightly odd, human necessity to waylay children’s awkward questions for as long as possible. In Hans Christian Andersen’s time, baby-making was particularly a taboo topic. Even today, many children get siblings before they are deemed ready for “The Talk” but their curious nature means parents have to tell them something. Because of their long history associated with babies and family, storks are an easy story to tell kids sometimes in the same breath as teaching them valuable life lessons like always being honest.

Do you know any other baby myths?