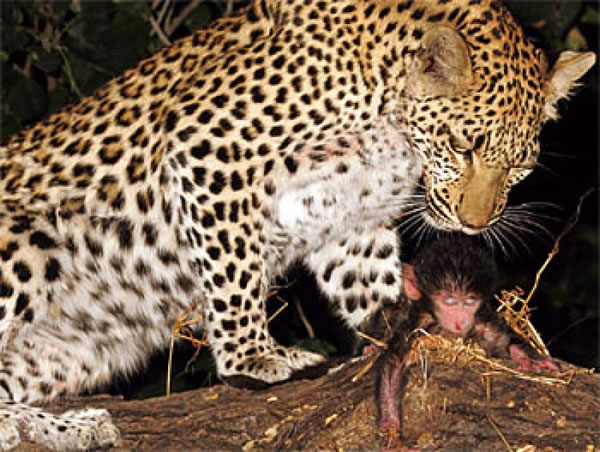 This heartwarming video shows a leopard discovering a baby baboon shortly after the big cat had killed it’s mother. Not sure what to do at first, the leopard adopts the little monkey and defends it from a pack Hyenas.

This touching scene is from Eye of the Leopard, a documentary film by National Geographic Channel that shows the journey, life, and growth of a young leopard cub named Legadema or “Light from the Sky”. What you’re about to witness is that animals have room in their hearts even for their natural enemies. We can all learn something from this.

Leopards are astoundingly strong. They are pound for pound the strongest of the big cats. They are able to climb trees, even when carrying heavy prey, and often choose to rest on tree branches during the day. One reason why leopards sometimes take their prey up in the trees is to ensure lions or hyenas can’t steal them.

Leopards are renowned for their agility. They run up to 58km/h and can leap 6m horizontally and 3m vertically. They are also very strong swimmers.

The leopard is the most elusive and secretive of the large felines. They are extremely difficult to trace and locate in the wild.

Leopards are predominantly solitary animals and have large territories. While male territories are larger than females and tend to overlap, individuals usually only tolerate intrusion into ranges for mating. They mark their ranges with urine and leave claw marks on trees to warn others to stay away.

Like domesticated cats, leopards will growl when angry and purr when content. They also have various vocalizations such as a rasping cough which they perform to announce their presence to other leopards.

Leopards tend to have two or three cubs per gestation. Mothers refrain from wandering their territories after giving birth until their young are capable to come with them. Cubs suckle for around 3 months and are kept hidden for about the first 8 weeks to protect them from predators.

Leopards tend to have distinctive dark spots called rosettes, which create beautiful patterns against their otherwise light fur. Black leopards however have dark fur which makes it difficult to see the spots. They appear almost solid black and are often called black panthers.