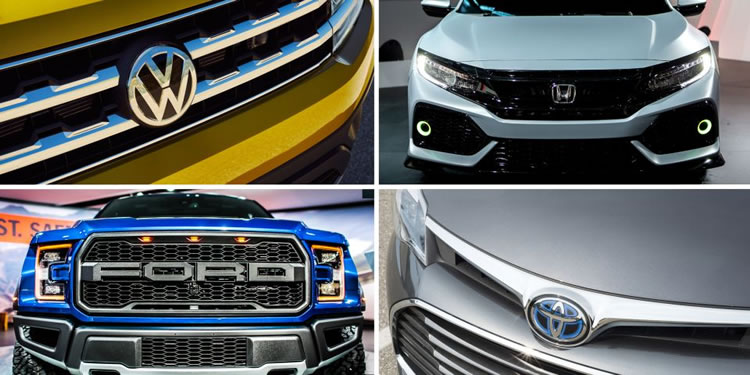 In the last decade alone, the demand for cars around the world has increased sharply. Statistics show an expected demand of 79 million cars in 2019 alone.

This is good news to new entrants in the automobile space, but it is perhaps even more encouraging to the already existing giant car companies.

Developed and developing economies such as Europe, the US, India, Malaysia, and Africa have played a big role in boosting the auto industry. According to the infographic below by Carsurance,
giant manufacturers are raking in hundreds of billions of dollars in revenue each year.

Want to know who the big boys are?

Without further ado, here is the list of the top three car companies in the world. You may not necessarily agree with our order of listing, but you might agree with us that they are some of the legendary car manufacturers in existence today.

Toyota is known to be one of the biggest cat producers globally. Kiichiro Toyoda founded the company back in 1937.

At the time of starting, Kiichiro set up Toyota as an extension of his father’s company, Toyoda Loom Works, a firm that majored in the production of automatic looms.

A couple of decades later, Toyota grew to become the first automobile company to hit an annual production capacity of 10 million cars by 2012.

The company boasts some of the best-selling car brands globally including Toyota, Lexus, and Hino, among others. The automobile giant reported net sales of $240 billion in 2018.

Founded in 1937 in Germany by the German Labor Front, Volkswagen is one of the most popular car manufacturers in the world today. Other than the stellar quality of its cars, the giant car manufacturer is also known for its high production capacity.

On average, Volkswagen produces 10.7 million cars yearly, including Bentley, VW, Bugatti, and Audi, among other popular brands. In 2018, the company reported net revenue of $117 billion.

Daimler is yet another popular car automobile firm known for producing some of the best German cars including Mercedes, Smart, and Maybach. Founded in 1926 by Karl Benz, Daimler recorded net sales of $187 billion in 2018, denoting a 1.9% rise in revenue from the previous year.

In terms of production, the firm averagely produces 3.3 million cars each year. Just like other popular companies, you are likely to find various brands manufactured by Daimler in all parts of the world.

Other popular car manufacturers include:

There you have it. Like we mentioned earlier, the list might not reflect the brands’ order of superiority
per se, but whichever order you choose, you are unlikely to miss these firms among the top automobile manufacturers around the world.