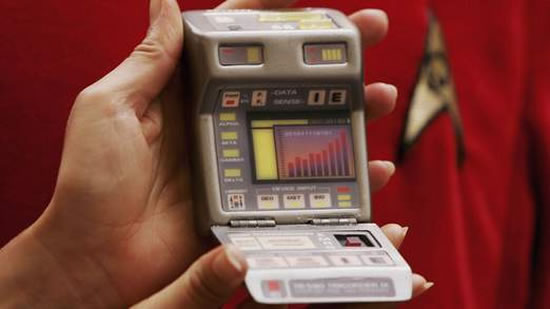 British scientists are hoping to replicate the medical expertise of Star Trek’s Dr “Bones” McCoy by developing a real-life version of his diagnostic tricorder.

The team hopes to use a £3.4m grant to build a handheld device that can diagnose a host of conditions.

The “multicorder” will house a selection of custom-made sensors designed to detect around 100 markers in blood or saliva.

“The multicorder device we’re working on will be capable of providing similarly rapid results but with the capability to diagnose a much wider range of conditions.

“What we’re hoping is that we’ll be able to replicate the capabilities of a whole lab in a single handheld device, making it much easier for doctors, paramedics and other medical professionals to make effective diagnoses.

“For countries in the developing world where access to laboratory tests can be limited, multicorder technology could mean the difference between life and death for patients.”

He also envisaged the technology, which will be developed over the next four years, being used at home to help people diagnose themselves.

The multicorder will not be quite as advanced, having to rely on test samples rather than diagnosing from a distance.

The research is being funded by a grant from the Engineering and Physical Sciences Research Council (EPSRC).

The device will be built using semiconductor technology commonly found in digital cameras.

Integrated circuits for the device are expected to be ready within two years.