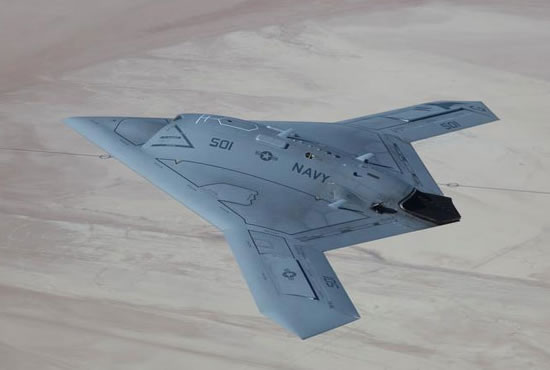 Though it already proved it could stick the landing, the X-47B Unmanned Combat Air System, prototype fighter drone, took another historic flight by being the first-ever unmanned aircraft to be launched from an an aircraft carrier.

The X-47B was catapulted from the deck of the USS George H. W. Bush, located off the coast of Virginia, on Tuesday. Controlled by a mission operator aboard the ship, the jet drone completed several approaches to demonstrate its ability to operate within the carrier environment before flying across the Chesapeake Bay to its home base, the Naval Air Station Patuxent River.

“Today we saw a small, but significant pixel in the future picture of our Navy as we begin integration of unmanned systems into arguably the most complex war-fighting environment that exists today: the flight deck of a nuclear-powered aircraft carrier,” Vice Adm. David Buss, the Navy’s “Air Boss” said in a statement.

The Navy says the X-47B is not intended for operational use yet, only for for developing concepts for future systems, demonstrating new technologies and seeing if the drone is compatible with the Navy’s fleet of aircraft carriers.

As opposed to the slower, prop-driven drones like the the Air Force’s Predator drones that are better suited for smaller, more prolonged conflicts that require light-weight missiles and insurgent surveillance, the jet-propelled X-47B appears designed more for quick, shock and awe bombing runs against heavily fortified enemies.

Whether or not the Navy adopts a full fleet of X-47Bs will likely boil down to cost. As Wired first reported, funding for drones is dropping. Additionally, David Axe points out that the Navy has already sunk a lot of money into the X-47B to the tune of $800 million since development began in 2007.

The Unmanned Carrier-Launched Airborne Surveillance and Strike System, a proposed follow-on program to the X-47B, could cost more than $2 billion over the next five years and billions more if put into full-scale production. By comparison, a ship-launched Predator-style drone could cost around $9 million to build, while a jet-powered drone fetches a $15 million price tag.

“The X-47B is a great story,” Mark Gunzinger, a defense analyst at the Center for Strategic and Budgetary Assessments think-tank, said according to Reuters. “It’s a milestone and a step forward for unmanned, carrier-based aviation. But I think the real story is what’s next. How do we operationalize this capability?”