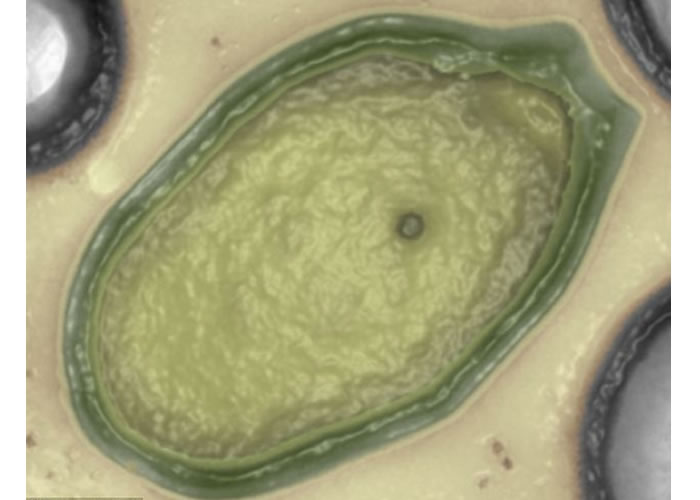 Scientists have found a new virus thought to be the biggest ever seen on Earth.

The virus, dubbed Pandoravirus, is one micrometre big – up to ten times the size of other viruses – and only six per cent of its genes resemble anything seen on Earth before.

This has led French researchers to believe the virus may have come from an ancient time or even another planet, such as Mars.
The giant virus is only found underwater and is not thought to pose a serious risk to humans
However, the researchers, who published their findings in the journal Science, believe that the virus opens up a range of questions about the history of life on Earth.

Dr Jean-Michel Claverie of Aix-Marseille University in France, who found the virus, told NPR: ‘We believe that these new Pandoraviruses have emerged from a new ancestral cellular type that no longer exists.’
Many traditional viruses range in size from around 10 nanometres (nm) to around 500nm.
The Pandoravirus is around one micrometre big and there are 1,000nm in a micrometre.
This means the Pandoravirus is big enough to be seen under the most basic microscopes.

Dr Claverie explained that because the virus is very big and lacks the regular shape normally associated with viruses, he initially thought it was a small bacterium.
His team went on a hunt for giant viruses after a survey identified signs of them in seawater.

They took sediment samples from the coast off Chile and from a pond in Australia.
They took the samples to their laboratory and put them in a solution packed with antibiotics in an attempt to kill any bacteria present.
These bacteria-free samples were then exposed to amoebas knowing that if they died, there must be something else in the samples killing them.
This proved to be successful and large amounts of Pandoravirus were spawned.
When the team studied them they found that their genetic code was twice the size of the Megavirus, which was previously the biggest virus ever found at around 440nm.

However, they were in for more of a shock as only six per cent of its genes resembled genes seen before in other organisms on Earth.
Dr Claverie told NPR: ‘We believe that those new Pandoraviruses have emerged from a new ancestral cellular type that no longer exists.’
He went on to explain that it is possible that they have come from another planet, such as Mars.
The researchers do not yet know why this cellular form became a virus but they speculate that it could have evolved as a survival strategy.
Alternatively, its unusual genome could have developed as a result of it picking up genetic material from its hosts.
The researchers say that they now expect to find more giant viruses.