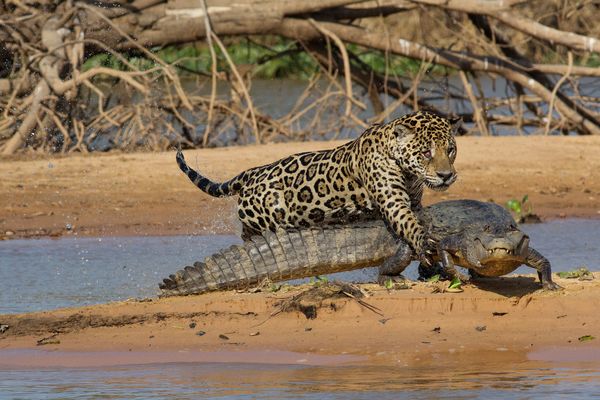 Nature is so beautiful but can be cruel check out these images from national geographic a jaguar kills a caiman in spectacular attack!

Photographer Paul Donahue got a call: A large male jaguar had been spotted on the hunt in central Brazil’s Tres Irmãos River.
Donahue, who tracks jaguar sightings for ecotourism operator Southwild in Mato Grosso, arrived at the scene to find an animal named Mick Jaguar hidden in thick grass, stalking a nearby group of caiman, a crocodile relative native to South America.

“Over the next 30 to 40 minutes we watched the jaguar very slowly slink along in the direction of the yacaré,” he wrote in his field notes. The largest of South America’s cats, jaguars are good swimmers and regularly prey on fish, turtles, and caimans. They also eat larger animals such as deer, peccaries, capybaras, and tapirs. The jaguar slipped into the water and swam across to the sandbar, where a roughly 120-pound (54-kilogram) caiman was basking in the sun, facing away from the water and the approaching predator, Donahue said. 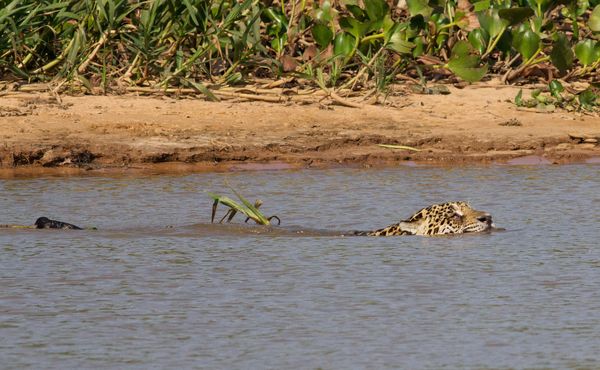 “A week earlier we had watched this same cat approach caiman on the same sandbar without success, and we were expecting a similar result this afternoon,” he wrote.”Just the same, our boat was positioned perfectly, with the sun behind us and very close to the caiman, so whatever happened was going to happen right in front of us.” Reaching the sandbar, the big cat rose slowly out of the water, and then suddenly pounced on the caiman. 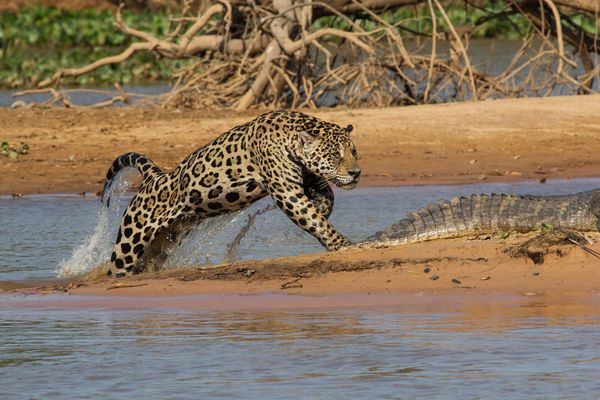 Named Mick Jaguar, the animal—known for its damaged right eye—had been observed before in 2011 and previously in 2013. Since 2004 Donahue and colleagues have recorded about 88 jaguars in the area of the Meeting of the Waters State Park, and since mid-June they’ve identified 22 individuals. The big cats currently live in isolated populations scattered across North and South America, which is part of the reason the species is listed as “near threatened” by the International Union for Conservation of Nature. Jaguars are ambush killers, dispatching their prey by piercing the skull or neck with a single speedy bite. Their strategy differs from that of most other cats, which grab their prey’s throat and suffocate it. 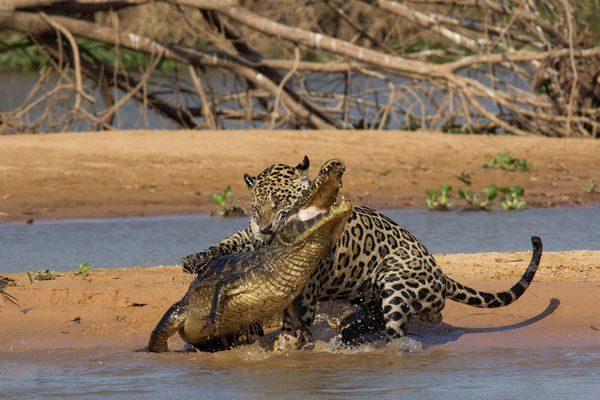 The jaguar grabbed the caiman first with its right front paw, then bit the reptile’s back a little below the head. The predator then quickly adjusted its bite to the base of the yacaré’s skull—the manner in which a jaguar normally kills—then wrestled the yacaré into a dragging position and headed back across the inlet, Donahue recounted in his field notes. The jaguar carries off his prize, which took just a few seconds to capture, Donahue said. “We all just stood there with our mouths hanging open, not believing what we had just witnessed,” he said. “We had seen kills before, but nothing so spectacular and horrific nor at such close range. It’s made me think a lot about the fragility of life and the fine line between life and death.” 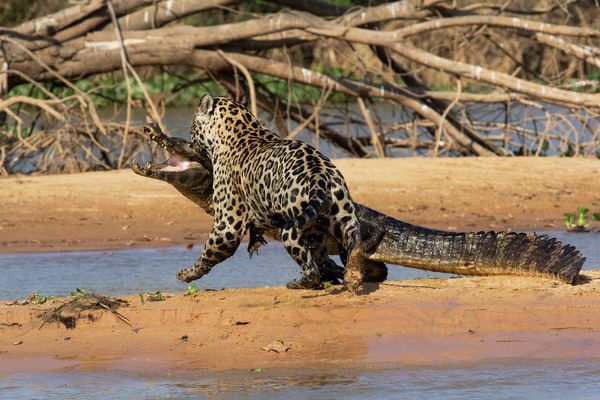