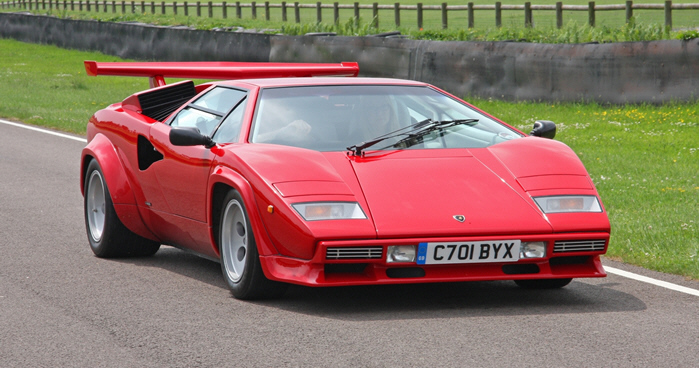 The word countach is an exclamation of astonishment in the local Piedmontese language — generally used by men on seeing an extremely beautiful woman.

In general, most Lamborghini cars are given names associated with bulls and bullfighting but when Nuccio Bertone first saw “Project 112″ in his studio the word Countach came to his mind and stayed with the car ever since. 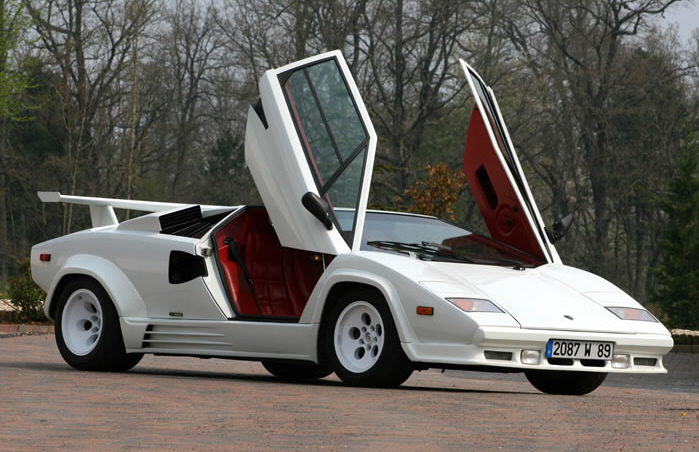 The Countach was styled by Marcello Gandini of the Bertone design studio, the same designer and studio that designed the Miura. Gandini was then a young, inexperienced designer—not very experienced in the practical, ergonomic aspects of automobile design, but at the same time unhindered by them.

The Countach shape was wide and low, but not very long. Its angular and wedge-shaped body was made almost entirely of flat, trapezoidal panels. There were curves, notably the smoothly coke-bottle wing line, but the overall appearance was sharp.

The doors, a Countach trademark, were scissor doors: hinged at the front with horizontal hinges, so that the doors lifted up and tilted forwards. The reason why the designers fitted these type of doors was because is the car’s tubular spaceframe chassis resulted in very high and wide door sills and so the width of the car made conventional doors impossible to use in an even slightly confined space. Care still needed to be taken though, in opening the doors with a low roof overhead.

The pure style of the prototype was progressively enhanced through out the cars production life to improve its performance, handling, tractability, and ability to meet mandated requirements. This began with the first production model, which included several vents which were found to be necessary to cool the engine adequately. These included the iconic NACA duct on the door and rear fender of each side of the car. The car design changes ended with a large engine vent directly behind the driver, reducing the rear view.

The Countach’s styling and visual impression helped it become an icon of great design. The superior performance characteristics of later Lamborghini models such as the Diablo, or the Murciélago appealed to performance car drivers and engineers, but they never had the originality or outrageousness that gave the Countach its distinction. 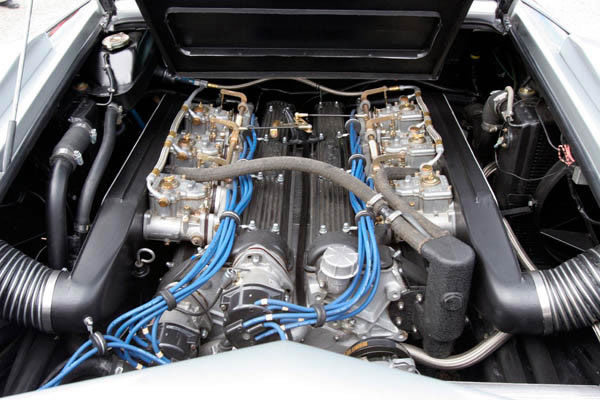 The rear wheels were driven by a traditional Lamborghini V12 engine mounted longitudinally with a mid-engined configuration. This contrasted with the Miura, on which the centrally mounted engine had been installed transversely.

Although originally planned as a 5 liter powerplant, the first production cars used the Lamborghini Miura’s 4 liter engine. Later advances increased the displacement to 5 liters and then to 5.2 L with four valves per cylinder.

All Lamborghini Countaches were equipped with six Weber carburetors until the arrival of the 5000QV model, at which time the car became available in America, and used Bosch K-Jetronic fuel injection.

The European models, however, continued to use the carburetors (which actually produced more power than the Fuel Injected cars), until the arrival of the Lamborghini Diablo, which replaced the legendary Countach.

A single prototype was built called the LP500 (the 500 standing for the 5 L displacement of the engine which was intended to be used). It was painted in a bright sunflower yellow and was shown to the world at the Geneva Motor Show in 1971.

The experimental concept car was constructed of aluminum honeycomb sheeting among other things, which was dropped for production.

The car did not survive; it was sacrificed in a crash test to gain European type approval, even though its construction method was utterly unlike production vehicles. 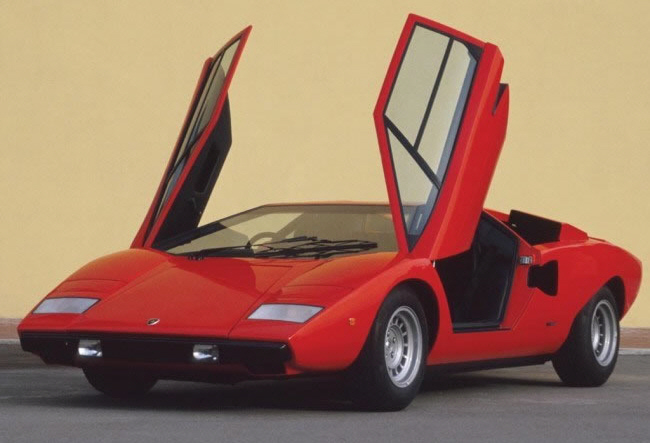 The Countach entered production as the LP400 with a 4.0-litre 353bhp engine and the first production Countach was delivered to an Australian in 1974.

Externally, little had altered from the final form of the prototype except at the rear, where conventional lights replaced the futuristic light clusters of the prototype. The styling had become rather more aggressive than Gandini’s original conception, with the required large air scoops and vents to keep the car from overheating, but the overall shape was still very sleek.

The original LP400 rode on the quite narrow tires of the time, but their narrowness and the slick styling meant that this version had the lowest drag coefficient of any Countach model and possibly the highest top speed. The emblems at the rear simply read “lamborghini” and “Countach”, with no engine displacement or valve arrangement markings as is found on later cars. By the end of 1977 the company had produced 158 Countach LP400s. 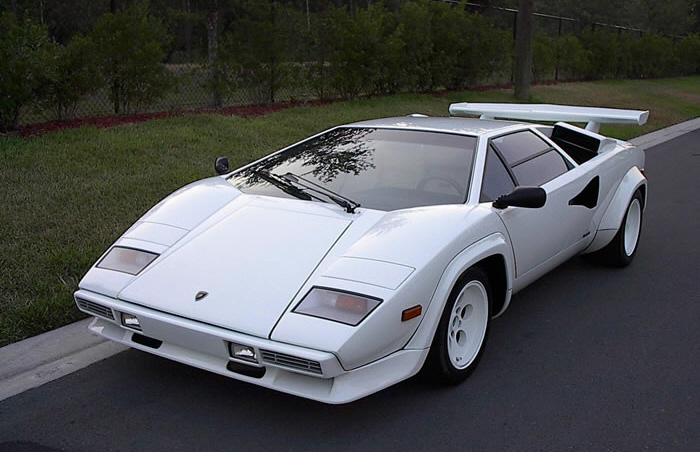 In 1978, a new LP400S model was introduced, the engine was slightly upgraded from the LP400 model and produced a higher 375bhp. The most radical changes were in the exterior, where the tires were replaced with much wider Pirelli P7 units, and fiberglass wheel arch extensions were added, giving the car the fundamental look it kept until the end of its production run.

An optional V-shaped spoiler was available over the rear deck, which, while improving high-speed stability, reduced the top speed by at least 10 MPH. Most owners ordered the wing.

The handling of the LP400S was improved by the wider tires which made the car more stable in cornering. Aesthetically, some prefer the slick lines of the original while others prefer the more aggressive lines of the later models, beginning with the LP400S. The standard emblems (“Lamborghini” and “Countach”) were kept at the rear, but an angular “S” emblem was added after the “Countach” on the right side.

Series One — The first 50 cars delivered with Campagnolo “Bravo” wheels in 1978 & 79. The very early 1978 cars had the original LP400 steering wheel. Small Stewart Warner gauges, 45mm carburettors and a lowered suspension (lowbody) setting is a trademark feature of this celebrated first series.

Series Two — These cars are recognized by their smooth finish dished/concave wheels, and still retain the lowbody setting. 105 unit were built.

Series Three — It is claimed that from chassis number 1121312 onwards, the cockpit space available was raised by 3 cm. These cars are recognized by their raised suspension setting. 82 cars were built. 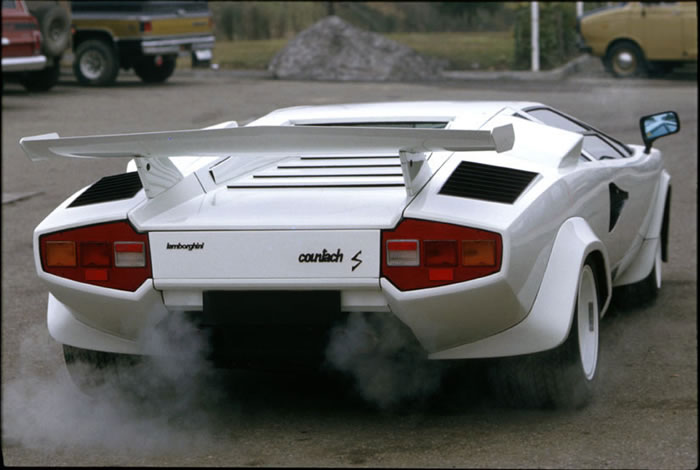 1982 saw another improvement, this time giving a bigger, more powerful 5 litre engine. The bodywork was unaltered. 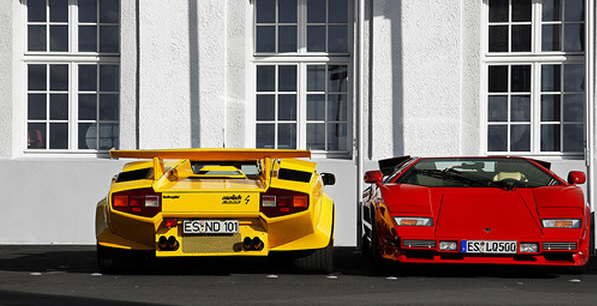 In 1985 the engine was improved again, bored and stroked to 5.2 litres (5167cc) and given four valves per cylinder. The carburettors were moved from the sides to the top of the engine for better breathing — unfortunately this created a hump on the engine deck, reducing the already poor rear visibility to almost nothing. Some body panels were also replaced by Kevlar.

For the first time, a US specification model was produced by the factory, with styling changes to allow bumpers to meet US federal standards. Although this change was the most notable on the exterior, the most prominent change under the hood was the use of Bosch K-Jetronic fuel injection providing 420bhp, rather than the six Weber carburettors providing 455bhp used in the Euro-spec model. 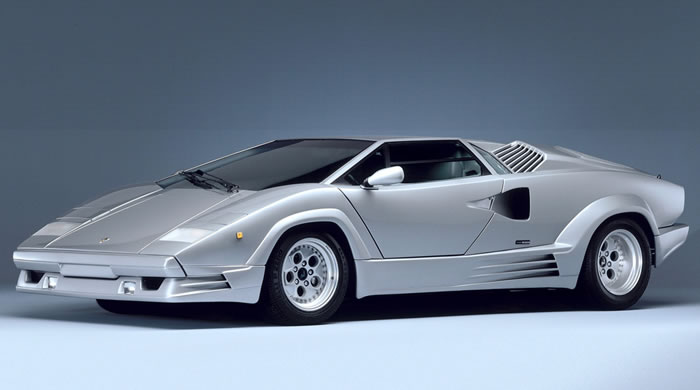 In 1988 a special 25th Anniversary Countach was created to celebrate the company’s anniversary. Mechanically, the Countach was very similar to the 5000QV but sported much changed styling. The rear ‘air boxes’ were restyled and enlarged, while the vents behind them were changed so that they ran front to back instead of side to side. In addition, a new air dam and side skirting, both with air intakes, were fitted, and the taillights were restyled to be narrower, with body-colored panels replacing the upper and lower parts of the previous large taillights.

The styling changes were unpopular with many, particularly since the intakes had strakes in them that appeared to mimic those on the Ferrari Testarossa, but they improved the engine’s cooling, a problem the Countach had always struggled with. It also featured 345/35R15 tires; the widest tires available on a production car at the time. The Anniversary model was produced through 1990 when it was replaced by the Lamborghini Diablo.

Even though the Countach had overheating problems and almost zero visibility it became an iconic supercar due to its gorgeous design. In fact the car’s poor rear visibility and wide sills led to drivers adopting a method of reversing the car for parking by opening the door, sitting on the sill, and reversing while looking over the back of the car from outside. 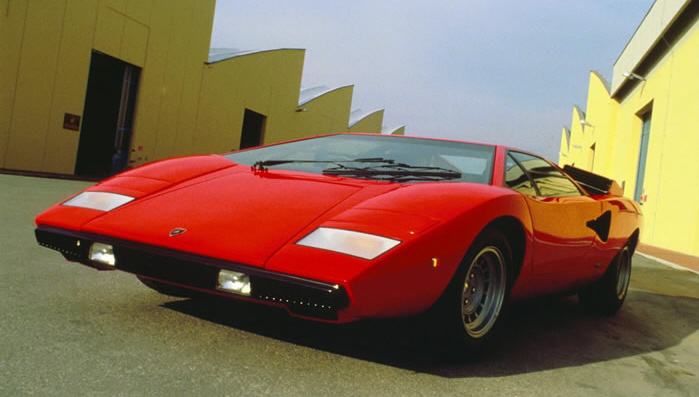 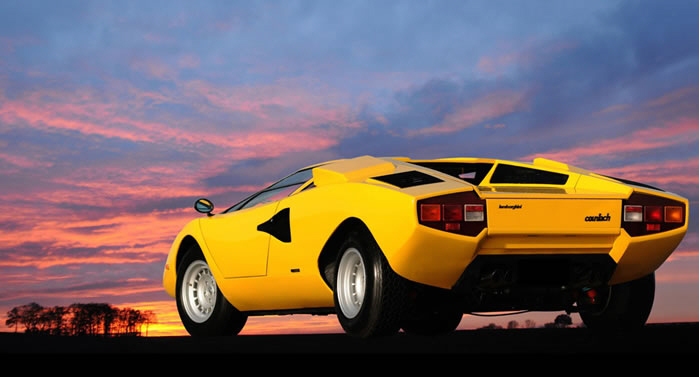 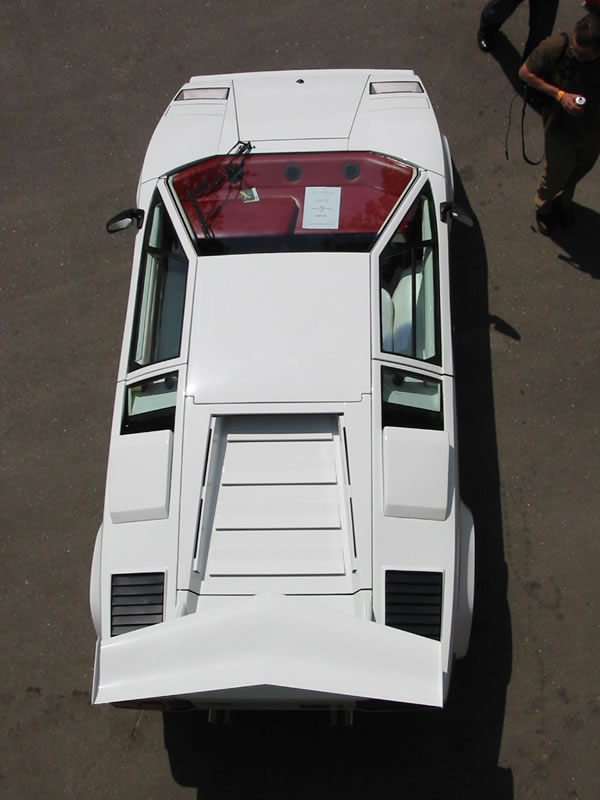 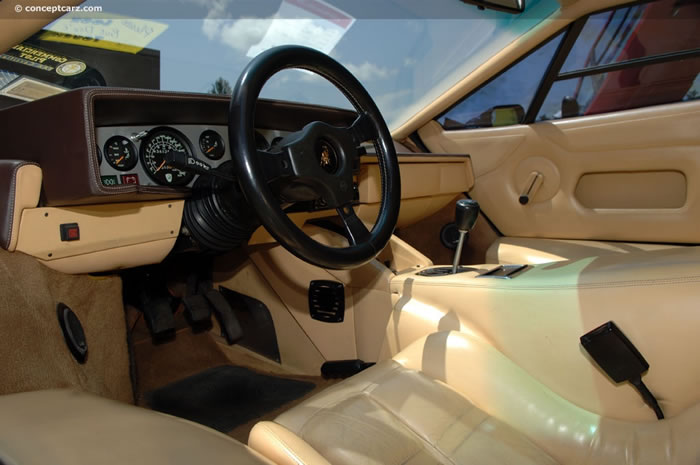 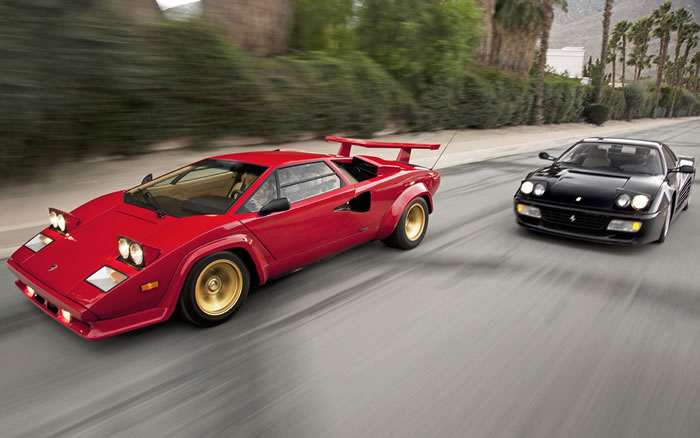 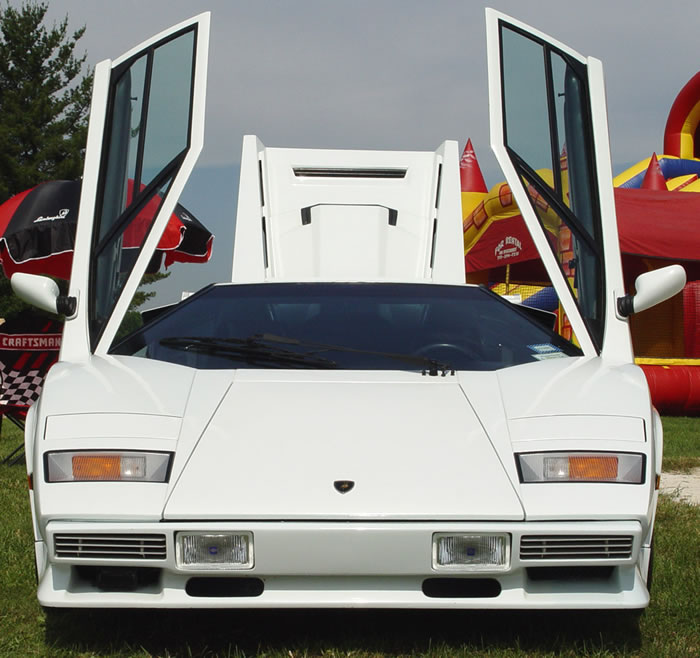