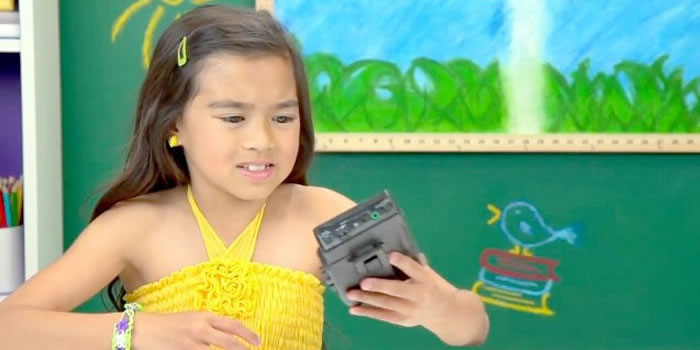 A group of kids were given a Sony Walkman and asked what it is. How many do you think knew what it was?

The video has had over seven million views and reactions from the kids are priceless.

[SEE ALSO – HOW DO YOU DECIDE WHO TO MARRY? (written by kids)]

If you never heard of a Sony Walkman then here some facts about this mobile music player.

In 1979 Sony launched the Walkman in Japan. It changed how and where we listened to music and its legacy and name still continue today.

1. The idea for the Walkman came from Masaru Ibuka, the founder of Sony. He was a regular user of the 1978 TC-D5 portable tape recorder, but found it too heavy. He and Sony’s Executive Deputy President Norio Oga challenged Nobutoshi Kihara to come up with a simple, playback-only stereo version of the small Pressman tape recorder.

2. Over 300 different Walkman models have now been produced.

3. The Sports line of waterproof players was introduced in 1983.

4. Walkman was chosen as a name partly because of the popularity of Superman in 1979.

5. In early 1979, Morita held a meeting in which he held up the prototype Pressman-derived device and said the product should be manufactured and would be a hit among the young. He gave the engineering team less than four months to produce the model, which needed to launch in June.

6. In the UK, the first Walkman in the UK came with stereo and two mini headphone jacks – even though it only had one pair of MDR-3L2 headphones.

7. The first H-AIR MDR3 headphones weighed just 50 grams at a time when most headphones were 300-400 grams. They were being developed in Sony’s research labs at the time of the Walkman project.

9. The first TPS-L2 model was shown to the press on 22 June 1979. Journalists were driven to a park, given a Walkman and were told to walk around while listening to an explanation of the Walkman in stereo.

10. However, initial press responses were very lukewarm. They believed it wouldn’t take off.

12. Retailers weren’t keen on the product as they didn’t think they could sell something that wouldn’t record.

13. Yet, the word of the Walkman spread quickly among the young in Summer 1979. So much so that Marui Department Store placed an order for 10,000 units – even though major Japanese retail was still ignoring it.

14. The initial batch of 30,000 units sold out by the end of August and Sony had problems fulfilling orders for the rest of the year.

15. Other proposed names were Soundabout in the US, Freestyle in Sweden and Stowaway in the UK.

16. The latest Walkman line is the X-Series portable video player.

18. In 1986 the name Walkman was included in the Oxford English Dictionary.

19. 1992 saw the launch of the digital re-recordable, MiniDisc Walkman.

OTHER FUNNY STORIES YOU MAY LIKE:
– 30 Funny Test Answers Written By Clever Kids
– 50 Funny Mispronounced Words By Kids Who Might Need Extra English Lessons
– Funny Lies We Tell Our Kids
– Creepy Things Kids Say To Their Parents