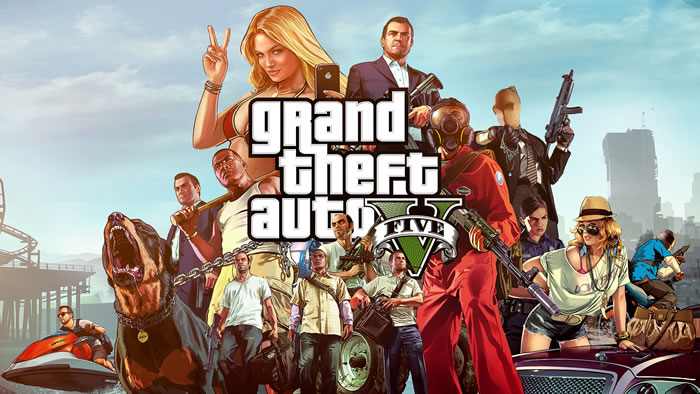 Amidst the turmoil, three very different criminals plot their own chances of survival and success: Franklin, a former street gangster, now looking for real opportunities and serious money; Michael, a professional ex-con whose retirement is a lot less rosy than he hoped it would be; and Trevor, a violent maniac driven by the chance of a cheap high and the next big score. Running out of options, the crew risks everything in a series of daring and dangerous heists that could set them up for life.

Grand Theft Auto V is the largest and most ambitious game Rockstar Games has yet created, and takes full advantage of every ounce of processing power available in the current generation of consoles. In order to provide the best possible experience for such a massive and detailed world, the game will have installation requirements on the PlayStation 3 system. 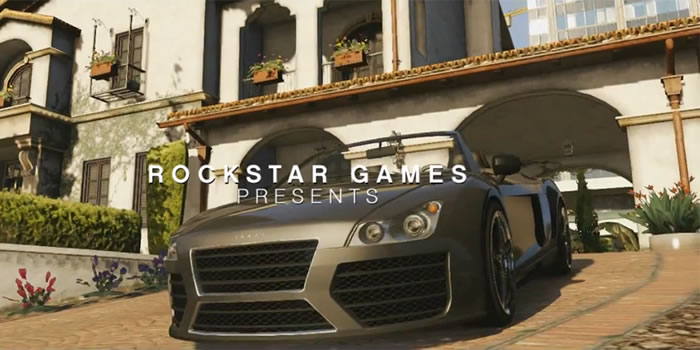 GTA 5 brings an amazing story with so many things to do it is really hard to get board! And thats before you start on the multiplayer. This is easily the game of the year. It is stunning graphically, pushing the PS3 to it’s limits, and the world seems endless.

Beginning:
When starting on the PS3 for the first time, expect a 10 to 15 minute install; story mode takes another 5 minutes to load. Once that is through, the game thrusts you into a heist as you learn the basic controls, most of which feel similar to GTA IV. You are also shown a new gameplay mechanic — switching characters on the fly.

Story:
Welcome to Los Santos, with all the glitz and glamor you’ve come to expect, but dirty and full of corruption under that surface. Our characters are Michael, a retired bank robber; Franklin, a repo man trying to do right and make his way up in the world; and Trevor, an unhinged, unpredictable maniac who used to run robberies with Michael. Each character is distinct, unique and and extremely interesting. You’ll want to spend time with all three. 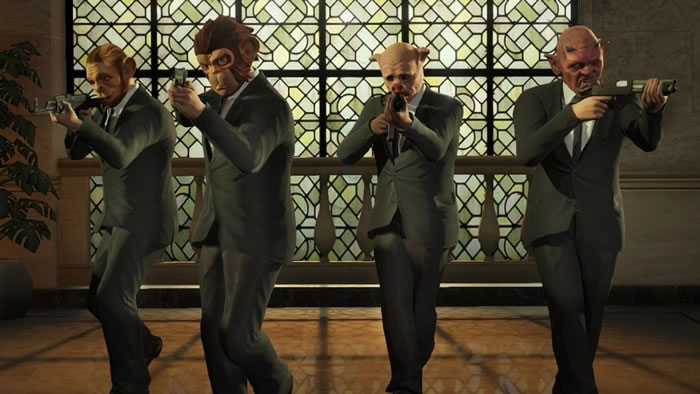 There are numerous improvements and upgrades to the classic Grand Theft Auto, all of which help makes a satisfying experience. If you fail a section of a mission 3 times, it is optional to fast forward to the next checkpoint. If there was a frustrating aspect, like having to place first in a race to advance the story, now you can skip the frustration and move the story along; you can go back and finish it later, or not at all.

The new mechanic of switching characters on the fly adds new gameplay possibilities, and lets you experience each character’s unique perspective. This allows you to be flexible in approach, and when things turn sour, use quick thinking and reflexes to make it out alive utilizing each characters skills.

Performing actions improves your abilities. Abilities include driving, shooting, flying, lung capacity and several others. For instance, to get better at driving, hit top speeds, have near misses and do general cool driving stuff like wheelies on motorcycles. To increase each character’s special ability, keep using it. To get better with gun just fire them. You get the idea. 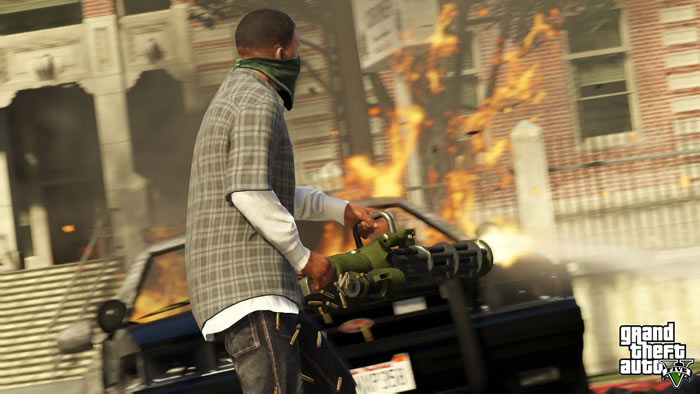 Shooting is easy to do as well, and the targeting system can be customized. A player can choose traditional GTA style shooting, assisted aim, and free aim. Guns can also be customized once purchased and fitted with flashlights, larger magazines, and silencers. The variety of weapons is quite large.

Rockstar goes outside the game to have an application and website that affects the game, iFruit and LifeInvader (their version of iPhone and Facebook). You can use iFruit to train and improve Chop, a dog that Franklin ends up with. Use LifeInvader to get discounts in game by clicking on the links when logged in and associated with your Social Club account.

Random missions are scattered around the map, which appear as question marks. These generally have story elements tied to them and help flesh out the characters and the world. There are also blue/red blips that will randomly appear and you can choose to participate by getting close. One random blip early on had me help two morons robbing a store get away and one of them told me to call them if I ever need muscle. You may encounter the same random event more than once, but there is a nice variety. 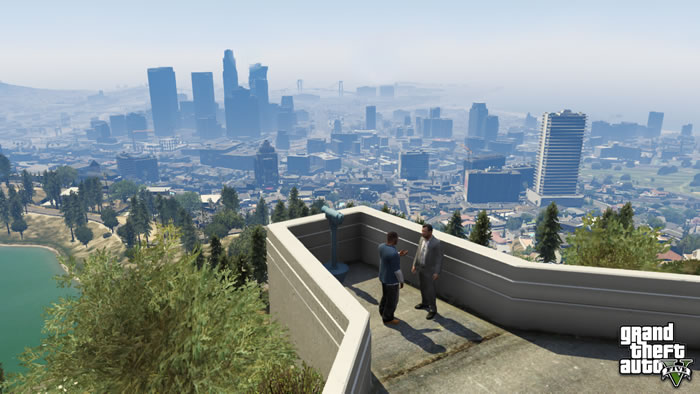 Los Santos is BIG. Once in game, looking at that map and zooming in, it was nearly overwhelming to see just how large the world is. Better yet, there are no barriers. You want to visit the mountains after the first mission? Go ahead. There is so much to do in Los Santos too. Visit the strip club (WARNING: unlike Liberty City, Los Santos is a fully topless region), golf, tennis, movies, tv, etc. You can shop to buy each character new outfits or visit a barber to give them a new look. Suspend your disbelief as a beardless character can order up facial hair for a few bucks. Invest in the Real Estate business and buy yourself a new safe house. Play the stock market. Take your dirt bike off road and explore the wilderness. can can even take up yoga too…

Driving can still be a pain, but the mechanics have improved. Top speeds in some vehicles are quite impressive, while driving large trucks is often very slow, but once at max speed it’s hard to stop them. You’ll be shouting with joy as you miss close calls and easily make that turn the biker just nailed at 90 degrees. There is Cinematic Camera during missions that allows you to actual enjoy the action that’s going on without having to worry about crashing the car, dealing with traffic, look where you’re going, etc. It’s easier to switch between the two modes with. When the action heats back up, switch the camera and jump straight in. 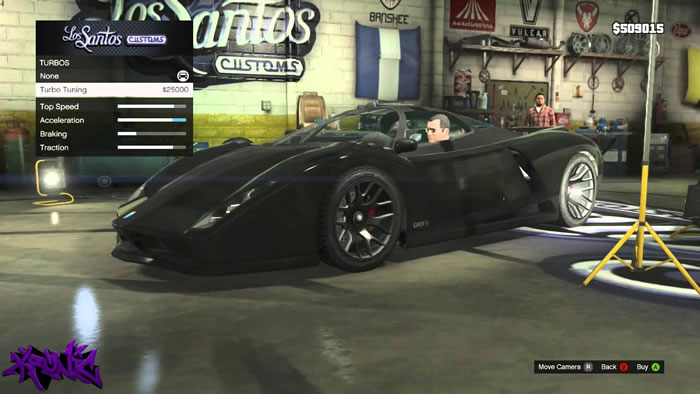 Car Customization is in-depth with 15+ different categories that can be improved or changed. Some categories have sub-categories as well, like choosing different color patterns such as metallic, matte, etc. Some are cosmetic, but many have other benefits as well, like protective armor or better handling. Car enthusiasts will enjoy tinkering with every detail on their car.

Missions are fun! While difficult, they are still accessible for even casual gamers. At the end of each mission there is a score based on what actions were completed, such as not receiving a single scratch on a vehicle for instance. This score can range from 0% to 100% for doing each action. Missions can be replayed at any time, so don’t feel the need to hit the 100% mark the first time through. In fact, I’d recommend not worrying about achieving 100% and just enjoy the atmosphere and story and come back to it later.

Heists are extremely enjoyable and you get your first taste in the introduction. These are in-depth, multiple part missions that let you case the place you’re going to rob, select a crew, and determine how you want to approach the robbery and get away. Each crew member has pros and cons, those with less developed skills may take more time to break into a place, but ask for a smaller cut. Likewise, the higher skilled, higher cut crew members could always break in quicker and allow for a bigger payout.

During the mission, you can switch between characters as desired to see from their perspective, or to help one of the other guys out of a jam. Have Franklin run in and when he gets into a jam, switch to Michael to provide cover fire and support. After the guys retrieve their score, switch to Franklin to land the helicopter and make their get away. 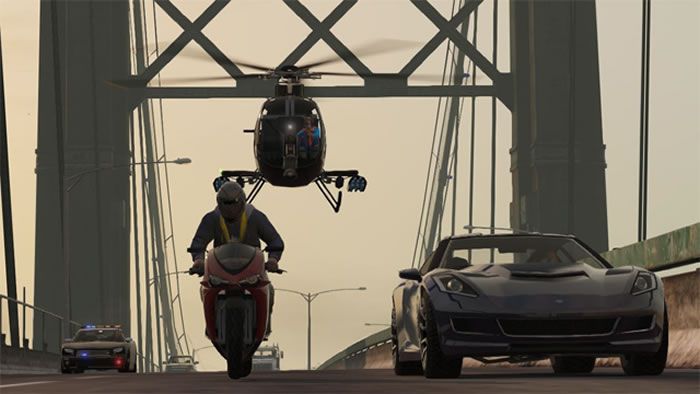 This is not implemented yet, but the released information is making this sound incredible. The transition will be seamless, with the “4th” character being your online persona. You can switch any time (though I’m sure not in missions). Everything you can do in single player mode can be done in the online portion. Up to 16 players are reported as being able to play at once, and you can form a “Crew” on the Social Club area of Rockstar’s site to play with friends. Characters are created by selecting two parents and then seeing what the offspring look like. This means you won’t see incredibly ridiculous looking characters running around… well, so far as two ridiculous looking parents can create. **Will update once this has gone live**

Audio:
Phenomenal job. Every sound breathes life and atmosphere into the game, whether you’re listening to the high quality radio stations or enjoying a stroll downtown. A woman walked by on the sidewalk in high heels – I could here every “clack clack clack” as she strutted by. I’m playing with a basic stereo set up, so I’m sure it sounds even more vibrant and alive in a full surround mode.

Graphics:
It looks like Grand Theft Auto, but better. The structure design and layout is what you’d expect from a GTA, but the textures have been vastly improved. Little details have been added to the world to make it feel more alive, I was noticing drains in the street and small potted plants. These small additions might not seem much, but added up together really enhance the world. You’ll be noticing the distant buildings with lights on during the night, or admiring the foliage as you drive down towards the beach. Random NPCs walking around are less detailed than main characters, though. They still look good and there is a huge variety of NPCs models.

The vehicles look better than ever. Random weather, night and day cycles, lights with the right amount of bloom to look believe – it all helps to pull you into Los Santos. Some of the textures are noticeably low resolution when close up, but thankfully the action is often too frantic and fast paced so you won’t have time to notice much. 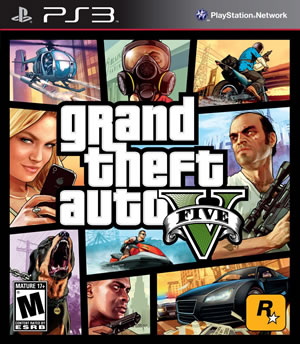