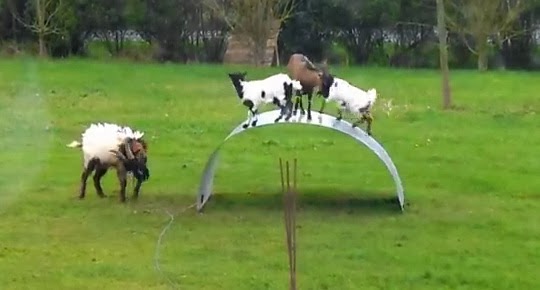 A video on YouTube has recently gone viral which shows a group of farming goats having fun on a bouncy steel board. The goats take it in turns to have bouncing fun and it is very funny to watch.

Let’s face it, if you are as sharp and curious as the average goat then life in the farmyard could become just a little bit dull. However, when a flexible steel ribbon is placed inside your pen for no apparent reason then a use for it just has to be sound.

This video shows that just like most other living things on this wonderful planet of ours, farming goats just wanna have fun.

The video was posted just five days ago and has already received over six million views.

Goats are social animals, however unlike sheep, who they are closely related to, they are not flock-orientated.

Goats communicate with each other by bleating. Mothers will often call to their young (kids) to ensure they stay close-by.

Mother and kid goats recognize each other’s calls soon after the mothers give birth.

Goats are very intelligent and curious animals. Their inquisitive nature is exemplified in their constant desire to explore and investigate anything unfamiliar which they come across.

Goats have excellent coordination. They have great balance and are thus able to survive in precarious areas such as steep mountains. They can even climb trees and some species can jump over 5 feet high.

The goat is one of the 12 Chinese zodiac animals. It represents introversion, creativity, shyness and being a perfectionist.

The latin ‘Capra’ is the root of the word ‘capricious’ which means quirky, whimsical, fanciful and apt to change suddenly.

Like sheep, a goat’s eye is rectangular rather than round. They have excellent night vision and will often browse during the night.

Goats discovered coffee! Apparently in Ethiopia a goat herd saw goats behaving more actively and energetically after eating from a particular bush. He then tried it himself and felt uplifted, awake and full of energy.

In Scotland feral goats are descendants of livestock which were abandoned during the highland clearances. They therefore act as a reminder of a turbulent past.

Original Article – The Ark In Space