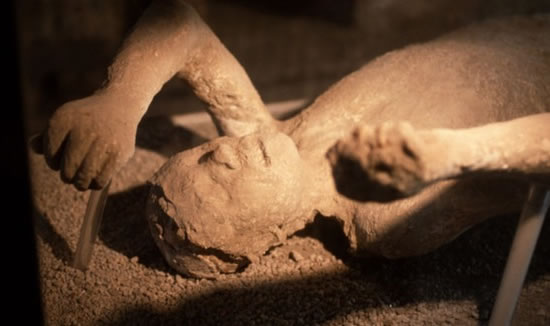 You can see the doomed life and death of Pompeii British museum exhibition.

Pompeii is the little Roman town that became a byword for sudden, violent death. 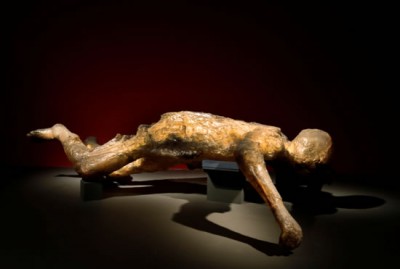 A new exhibition at the British Museum wants it to be equally famous for raucous, exuberant life.

Most visitors will know how residents of Pompeii and its neighbor Herculaneum died — in the eruption of Mount Vesuvius in 79 A.D. The volcano, long thought dormant, belched out a superheated cloud of fast-moving gas and debris that incinerated residents where they stood — and preserved the towns as museums of Roman life, frozen in time.

“Pompeii and Herculaneum were ordinary towns, but it was an extraordinary disaster,” said Vanessa Baldwin, assistant curator of the exhibition. “It was a tragedy, but it preserved them for us.” 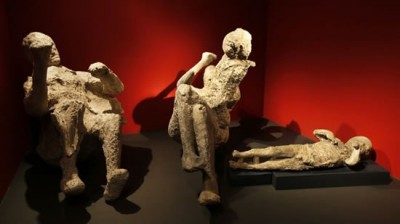 Pompeii’s extraordinary end still fascinates, making it one of the world’s most-visited ancient sites. “Life and Death in Pompeii and Herculaneum,” which opens Thursday and runs to Sept. 29, looks set to be one of the museum’s biggest-ever hits. It has sold 50,000 advance tickets, and will reach an even bigger audience when a live event in June is broadcast to hundreds of movie theaters across Britain.

It aims to un-freeze the picture, bringing to life a vibrant society completely unaware that disaster was about to strike. 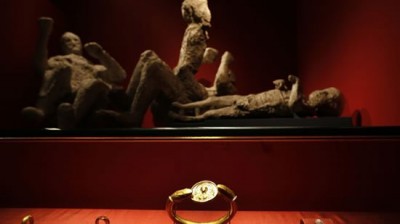 Many of the 450 objects in the show have never left Italy before. They have been loaned by Italian archaeological officials, who have themselves come under fire for the fragile state of the ancient site on the Bay of Naples.

The exhibition aims to give a vivid sense of how the towns’ ancient residents lived, through artifacts including mosaics, paintings, carbonized furniture and even the charred remains of residents’ meals.

“We want people to take a fresh look at the Romans,” Baldwin said Tuesday. “We want them to come away feeling a bit closer to them, feeling like they can relate more to them. They can go into their kitchens and recognize things that they have in their own kitchen.” 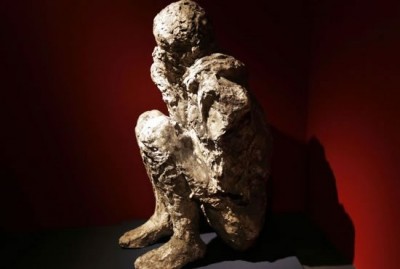 The exhibition is structured around the rooms of a typical wealthy resident’s house, from the shops at the entrance to the atrium, bedrooms, kitchen and garden — and even the latrine. Among the items proudly displayed are the contents of a cesspit: broken jars, lamps and perfume bottles, coins and jewelry — though not, thankfully, the 700 bags of ancient excrement also found there.

Elsewhere there are sturdy cooking pots, elegant serving dishes and sleek mass-produced tableware, along with wooden items whose survival for 2,000 years — carbonized by the heat of the volcano — seems miraculous.

An elegant wooden side table and a baby’s crib are not much different from versions in use today. The heat also preserved items of food, including bread, grains, dates and pomegranates.

Then, as now, food was a key part of home life and the economy. Some merchants grew rich from fish sauce, or garum, a Roman kitchen staple made from fermented mackerel heads and guts. Both ordinary and kosher varieties were available, and several of the elegant clay jars are on display.

British Museum Director Neil MacGregor said that what has emerged from the ash at Herculaneum and Pompeii “was not at all the Rome people thought they would find. It was much more complex — a much funnier, a much livelier place to live.”

The exhibition shows that it was certainly a richly decorated, colorful world. Floors and walls were adorned with mosaics and frescoes of plants, animals and humans — the latter often in explicitly sexual poses.

For all the familiarity of this Roman world, there are surprises. The exhibition reveals that Pompeii and Herculaneum were less stereotypically “Roman” places than we might think. Many residents were descended from Greeks or other groups, and more than half were slaves or freed slaves.

It was also an era of considerable social mobility. Freed slaves, known as liberti, were a powerful segment of society, owning businesses and properties.

A prominent role was played by women, who could own wealth and go into business, but not vote or hold public office. A fresco of a baker and his wife shows them as business partners and apparent equals.

Inevitably, the towns’ sudden end casts a poignant shadow over the exhibition. 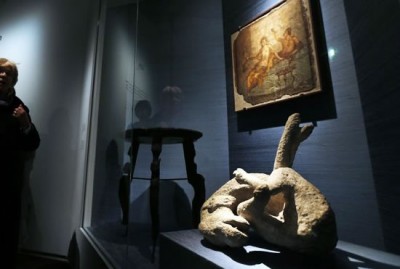 It’s not known how many people died in the eruption of Vesuvius, but 1,500 bodies have been found in the two towns, which are still only partially excavated. Two-thirds of Herculaneum and a third of Pompeii remain buried.

In one room of the exhibition is a floor mosaic of a guard dog — an ancient “Beware of the Dog” sign. Elsewhere is the dog himself, contorted in agony in his final moments. Volcanic ash hardened around the canine corpse, which eventually rotted away. Centuries later, archaeologists poured plaster into the gap, creating a perfect dog-shaped mould.

The same technique has been used on some of the human victims, including a whole family, hunched against the deadly heat, a child huddled in its mother’s lap.

Despite all the death, it is the vivid life of the towns that makes the strongest impression. 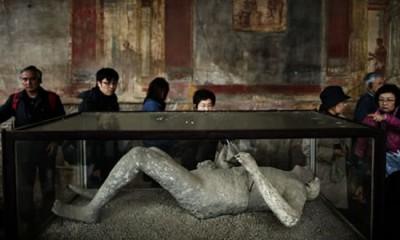 One exhibit is a sign from a dining room, which advises guests: “Don’t dirty the couch covers, keep your eyes off other people’s partners and take your quarrels home with you.”