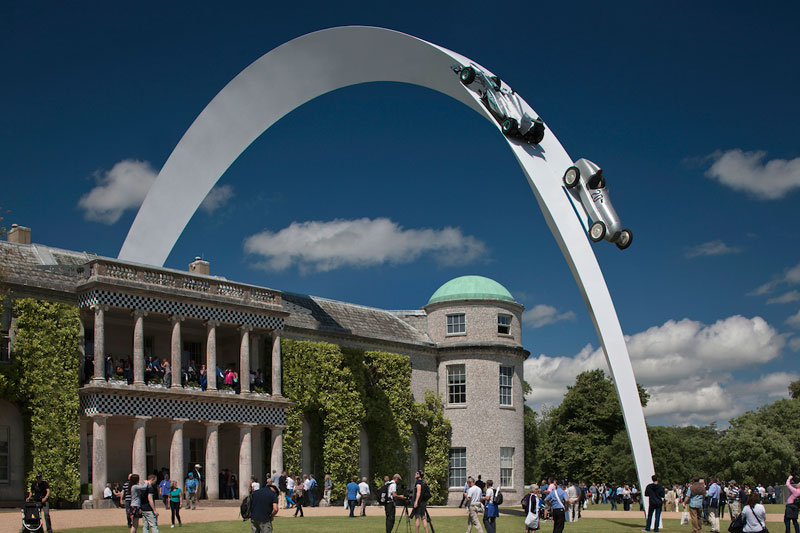 Amazing new car scupltures have been displayed at the Goodwood Festival Of Speed in England since 1997 created by extraordinary artist Gerry Judah!

Each year the festival of speed is Held at the private grounds of the Goodwood Estate in Sussex, England. Cars of all sorts from all over the world and all types from classics to latest sports cars compete in an historic annual hill climb event attracting many thousands of visitors from all over the globe.

Each year you can find a new car sculpture design made by Gerry who is very much part of the scene and scenery at these marvelous events. 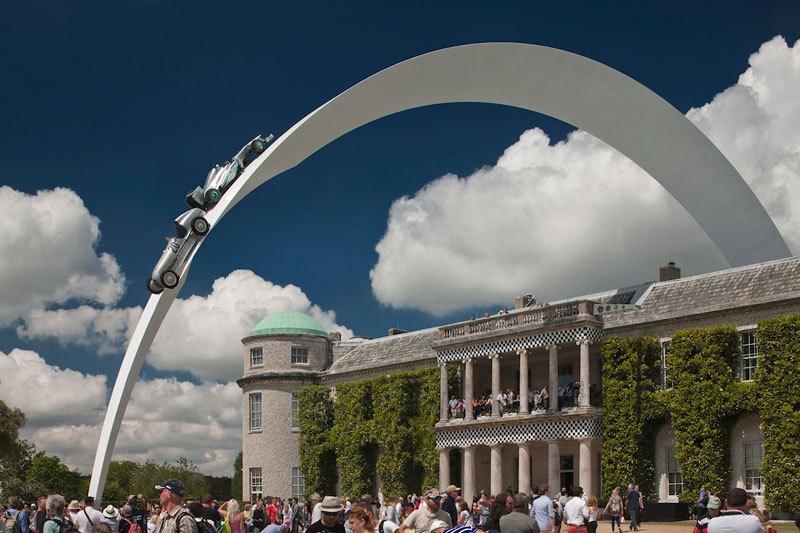 German racing “Silver Arrows” was born 80 years ago, stripped of paint the 1934 Mercedes-Benz W25 won at its first outing at the notorious Nürburgring Nordschleife, with Manfred von Brauchitsch, this is whi since then the companies works cars are always silver. The other Silver Arrow featured overhead is the MERCEDES AMG PETRONAS Formula One Team’s F1 W04 which raced in 15 Grand Prix in 2013 piloted by Lewis Hamilton. 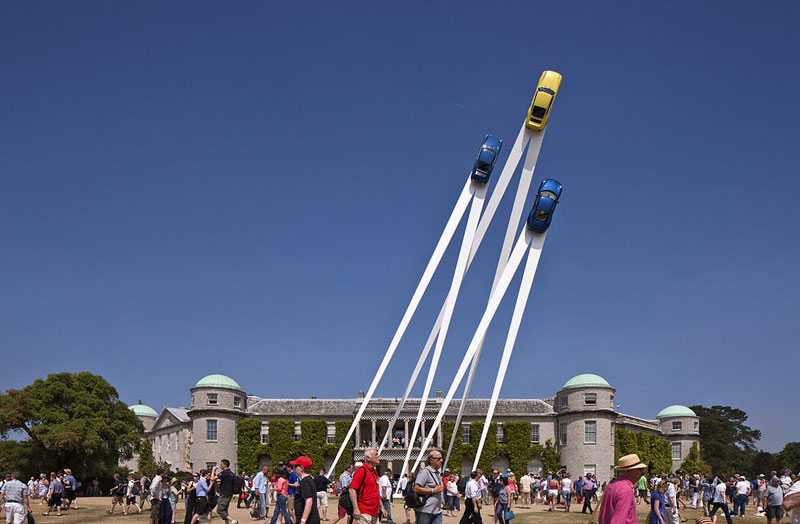 Three white, steel arrows climbing upwards all supporting and racing each other each one an example of the historic 911 at the top. The models featured are the Original 1963 911, then the 1973 911 and finally the 2013 Carrera RS 2.7. 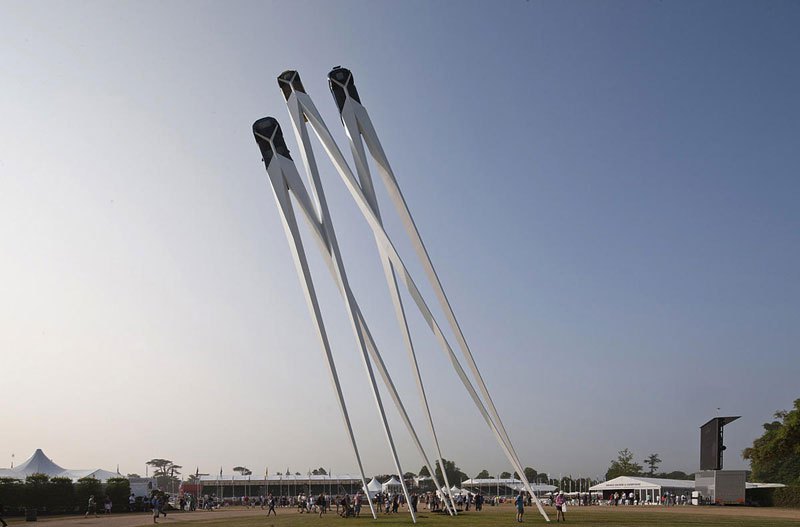 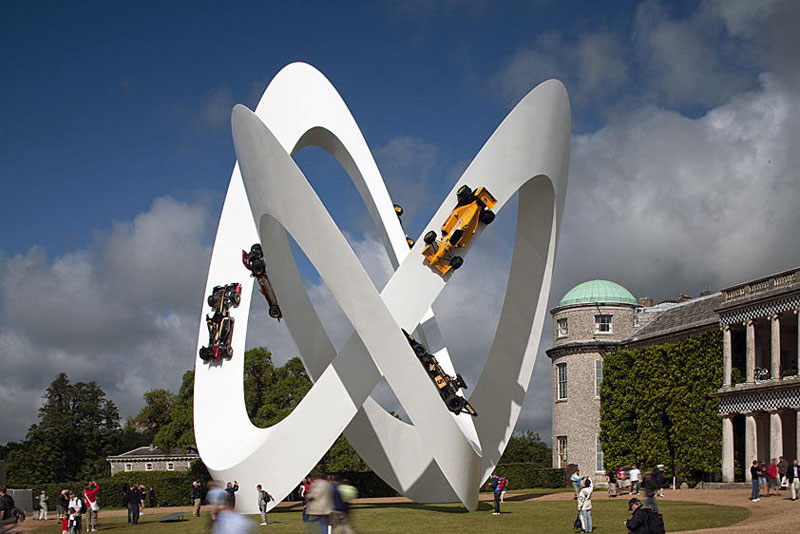 Featuring six classic lotus marques, the Lotus 32B driven by Jim Clark in 1965, Lotus 49B driven by Graham Hill in 1968, Lotus 72E driven by Emerson Fittipaldi in 1973, Lotus 79 driven by Mario Andretti in1978, Lotus 99T driven by Ayrton Senna in 1987 and the very latest Lotus F1 Team challenger. 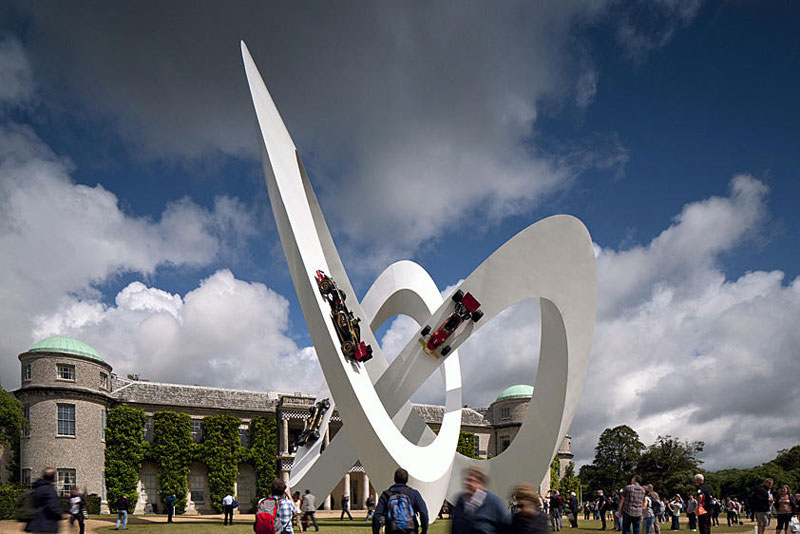 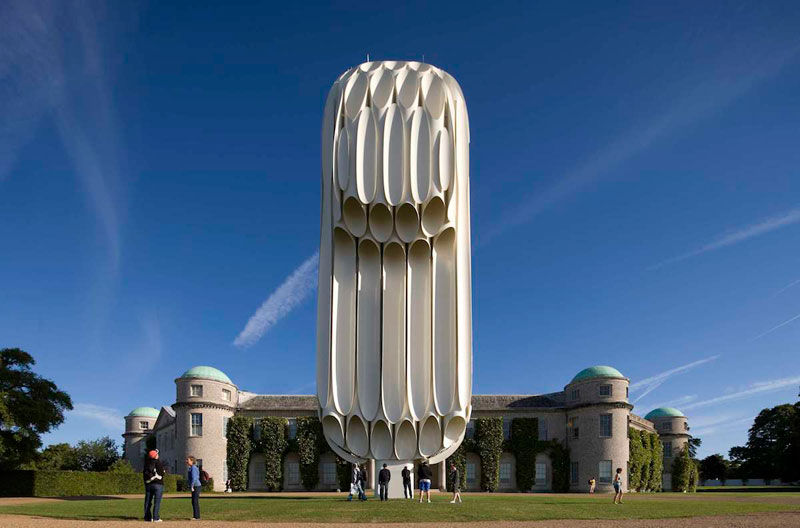 The sensational and most stunning car ever made in the eyes of many, the Jaguar E-Type could reach 150 mph and had all round great performance in car built in 1961. Even Enzo Ferrari described it as “the most beautiful car ever made.” 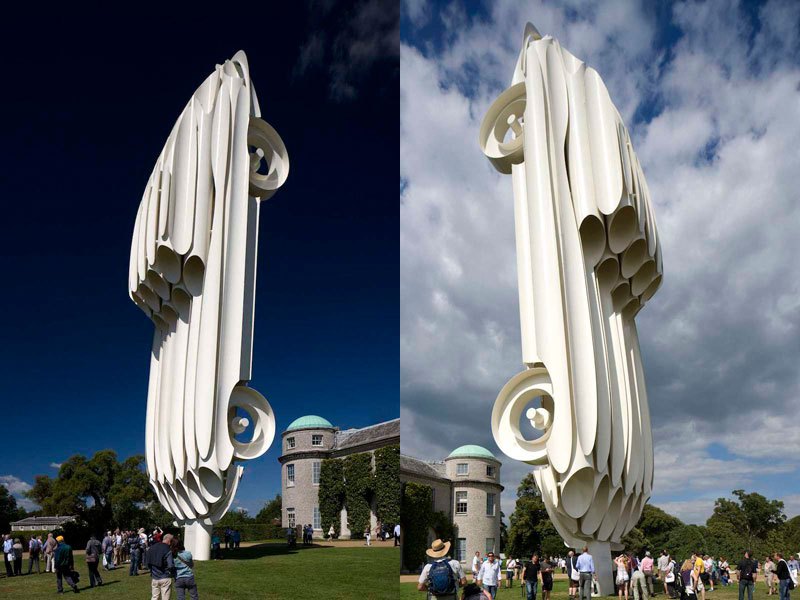 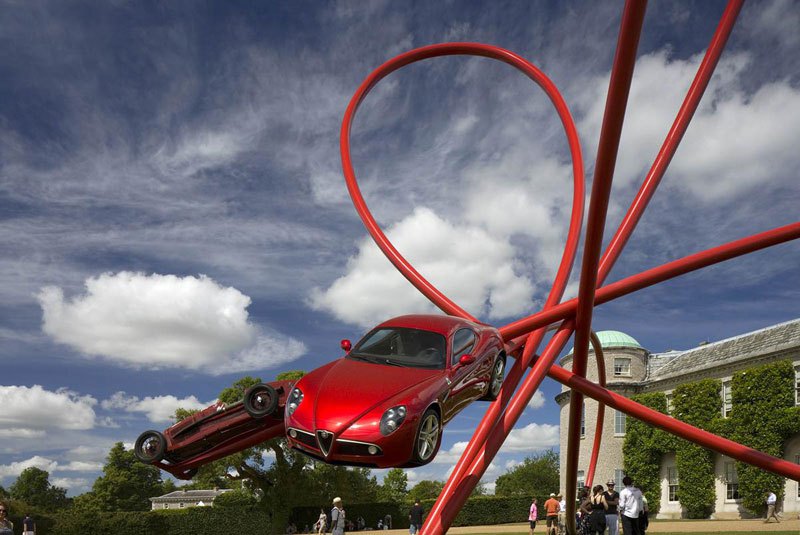 Featuring two of Alfas most iconic cars from the past and the present P2 and the 8C Competizion. 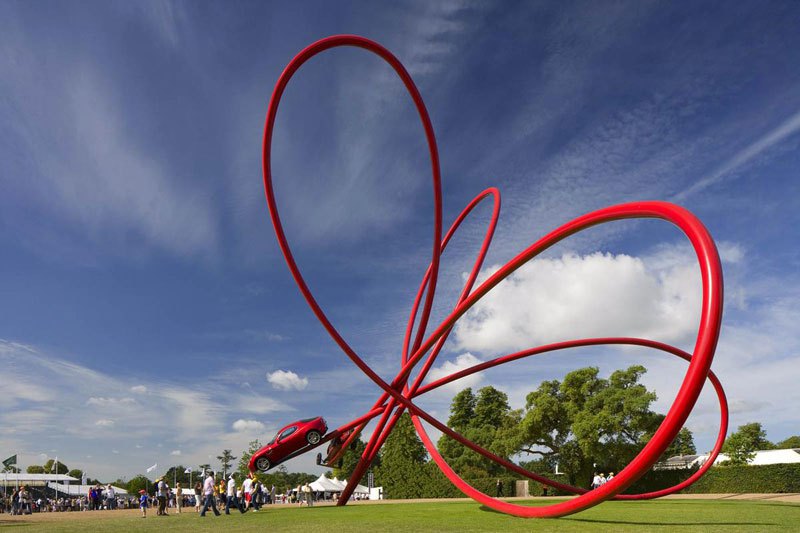 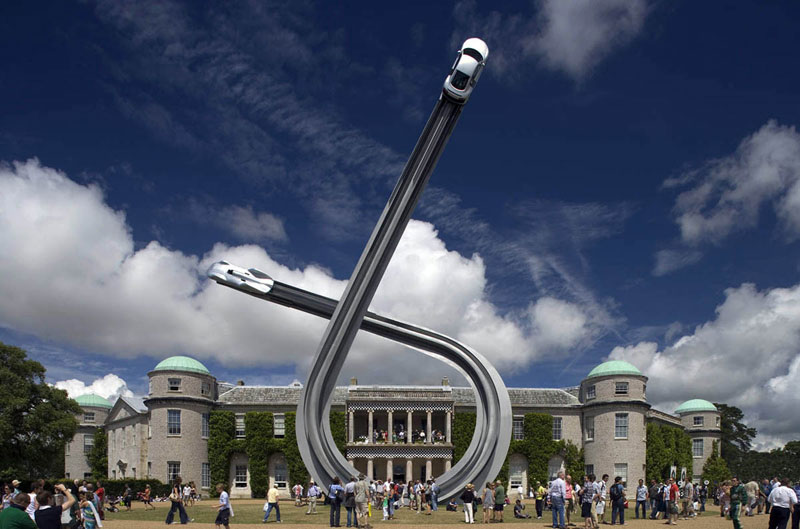 To commemorate 100 years of racing history Audi have featured two cars, the 1937 Auto Union streamliner and the 2009 Audi R8 V10. 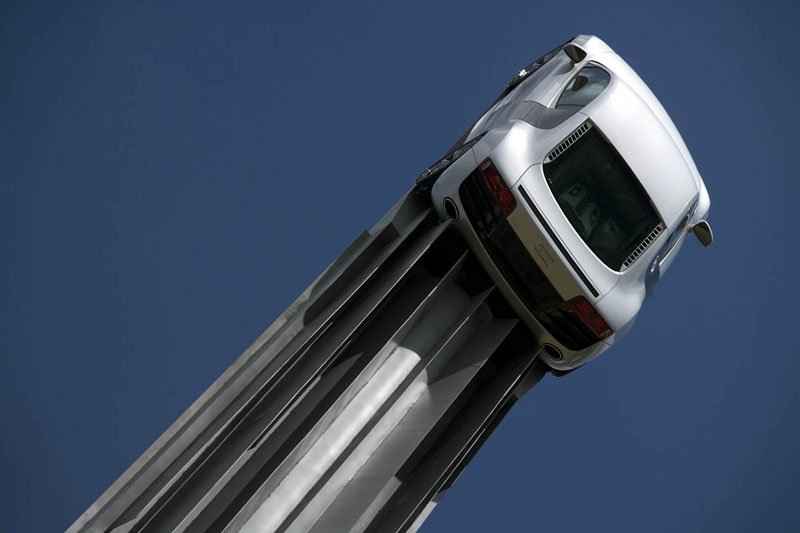 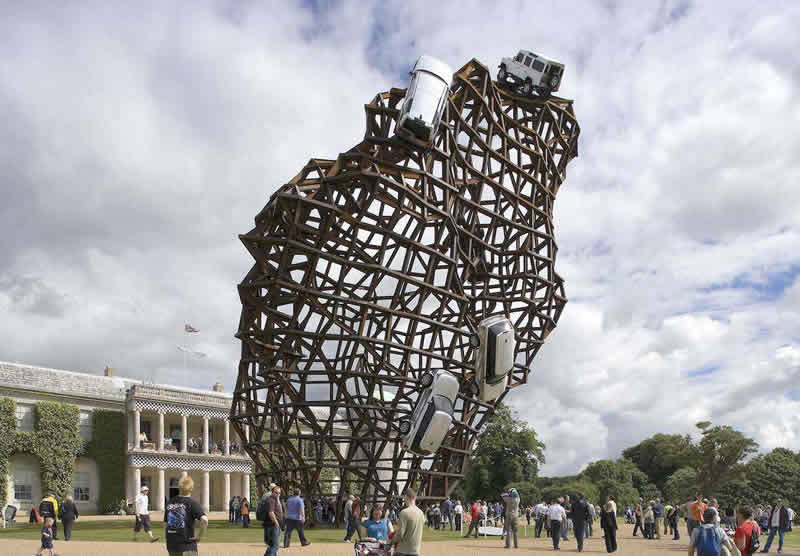 Celebrated its 60th anniversary the Land Rover creation is ambitious and impressive resembling a giant man-made rock it embellishes the rugged off road capabilities of this brand. 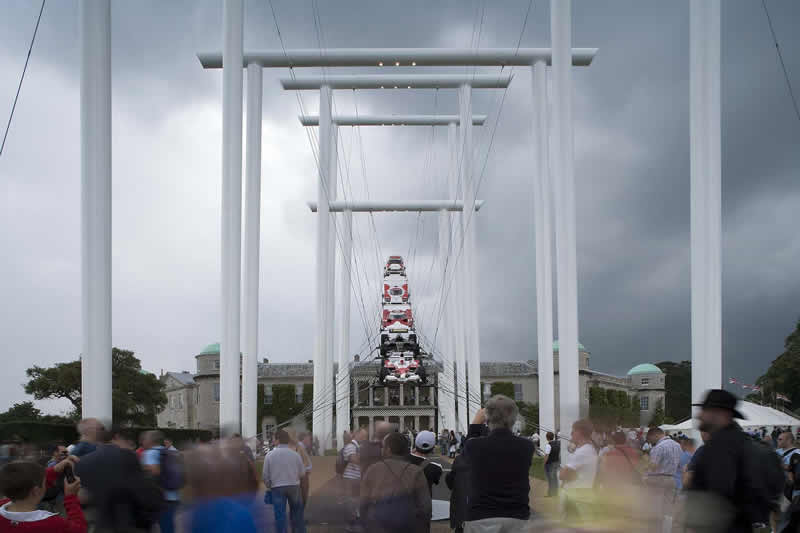 The Toyota creation celebrates 50 years of motor sport success and a power and accuracy of its racing cars.