Black Cats Halloween – Why Are They Considered Bad Luck? 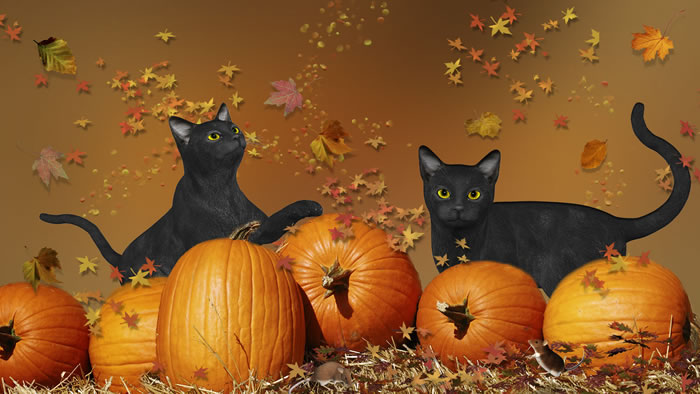 Black Cats Halloween – For centuries the black feline has been considered to bring bad luck and they have been given a bad press by being associated as a witches pet. Black cats pop up frequently in all sorts of culturally folklore, and though much of their myths are actually of the positive kind, Western tradition has tarnished the little critters as a bad luck symbol.

Popularity of black cats Halloween time increases with people everywhere dressing up and buying decorations related to the black cat. But where did all this superstition start? 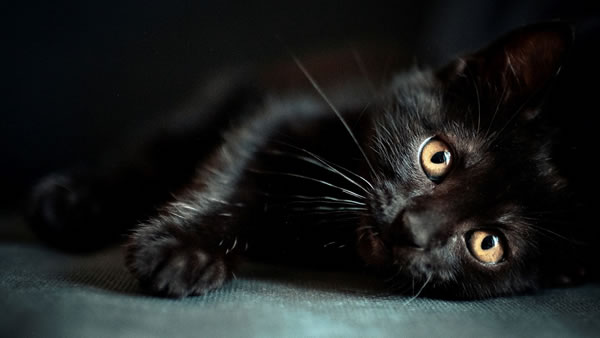 It seems that the association between bad luck and black cats dates all the way back to the middle of the fourteenth century. It’s not known exactly how and why cats became associated with the Devil in the Middle Ages, but the belief was so persistent that they were all but exterminated during the Black Death pandemic around 1348 CE. (Pause to cry.) Ironically, killing off the cats only worsened the plague, which was often spread via rodents, which all those dearly departed cats could have helped kill. Oopsie! 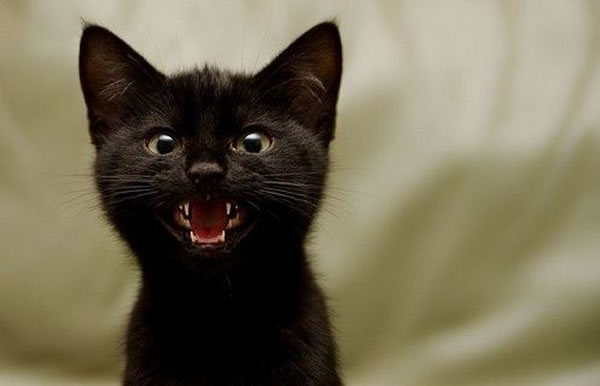 Scottish folklore includes a fairy known as the Cat Sith, a giant black cat (with a small white spot on his chest) who was believed to have the ability to steal a dead person’s soul before the gods could claim it. That belief led to the creation of night-and-day watches called the “Late Wake” to guard bodies just before burial. The Scottish also employed such tried and true methods as “using catnip” and “jumping around a lot” to scare off potential Cat Sith soul-stealers. (Some things never change, even when you’re dealing with possibly fairy-infused felines.)

THE AGE OF WITCHCRAFT 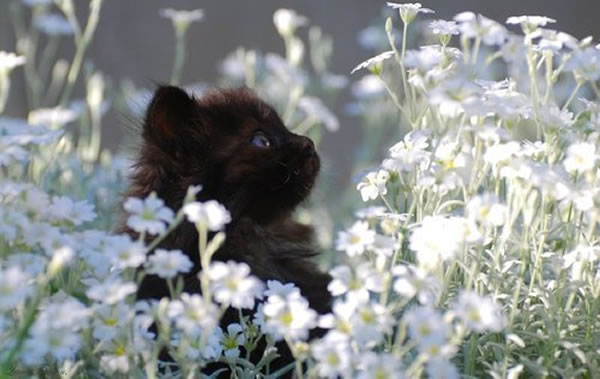 Blame black magic. As chatter about nefarious witchcraft began to spread around Europe in the sixteenth century, cats (particularly black ones) found themselves tangled up in the hunt, simply because many presumed witches had taken in alley cats as companions. Somehow, the concept of “companion” turned into “familiar,” and the belief that witches could turn themselves into their (typically black) cat companions became a persistent one, even carrying over to America, where it was an indelible part of the Salem Witch Trials.

It didn’t help matters that the Puritan pilgrims who helped populate Salem, Massachusetts were devout Bible believers, and the combination of a major fear of anything Devil-related (dating back to the Middle Ages) and the lingering belief that black cats were a classic part of witch lifestyles was a lethal one. 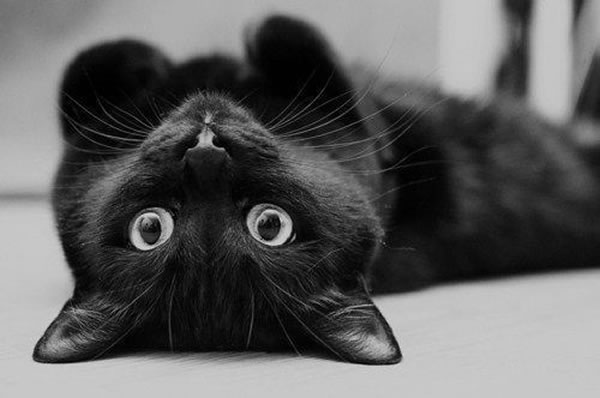 There’s also plenty of folklore and legend associated with the actual movements of black cats. In many of the European countries where the felines are still seen as bad luck, it’s an extra bad omen when a black cat actually crosses your path.

However, the Germans seem to have lightened up this piece of legend, believing that a cat that crosses from right to left is bad news, while one that moves left to right signals good things ahead. Good luck trying to get a cat to move the way you want them to; as any cat owner knows you’ll already need good fortune, skill, and a whole of patience to get any kind of cat (black or not) to follow direction as related to paw placement (maybe just let them walk the way they want to, and simply reposition yourself—again, it’s a cat world).

Superstitious gamblers also adhere to the cross-path bad news brigade—if a black cat crosses a gambler’s path while they are heading out to gamble, they are meant to turn back.

Even some pirates subscribed to movement-based beliefs, holding fast to the idea that if a black cat moves towards you, that’s bad luck, but a cat moving away from you means good news. Particularly piratey? If a black cat walked onto a ship and then walked off, the ship would sink on its next outing (keep your ship’s cats close, people). 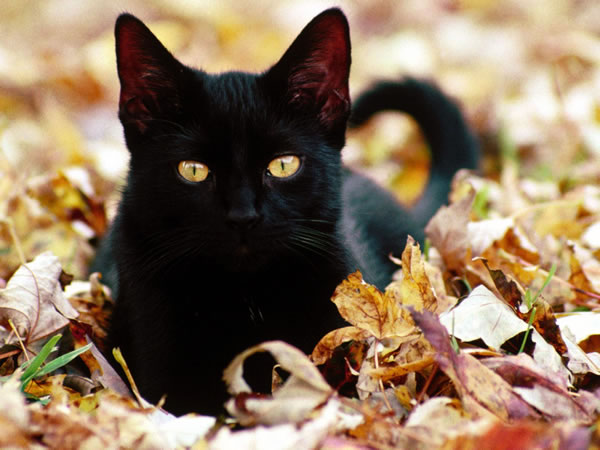 While black pigmentation isn’t limited to specific breeds (in fact, the Cat Fanciers’ Association lists “solid black” as a color option for 22 breeds), the Bombay breed is likely the kind of cat you picture most often when you imagine a classic black cat. Most black cats also come with golden yellow eyes, thanks to the high melanin pigment content in their bodies. And though all-black cats can be either boys or girls, there’s a slightly higher prevalence of the coloration in male cats.

IT’S NOT ALL BAD LUCK 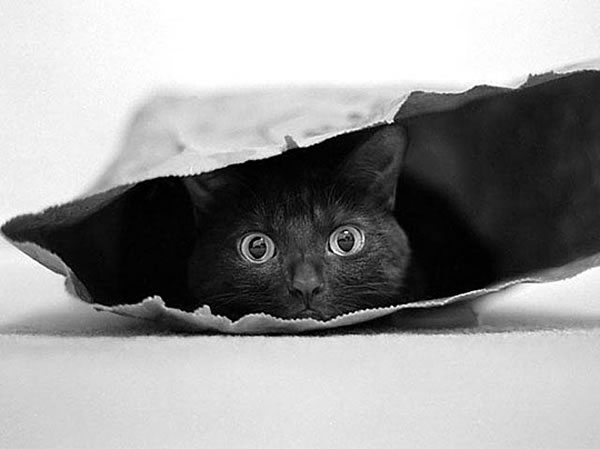 In some legends, black cats are actually good luck, as is the case in Great Britain (though not Yorkshire!). The belief in the power of black cats is so strong that they’re still given as gifts to brides in the English Midlands in order to help bless new nuptials.

It does seem that the influence of the Egyptians and their love for cats held over in some European cultures. Sailors and their wives alike believed in the good luck power of the black cat, with some fishermen keeping such cats on board while their women kept black cats at home for a double dose of fortune.

The Japanese also honor black cats as symbols of good luck, and they are viewed as particularly important to single women, as having a black cat is believed to lure in many fine suitors. Up in Russia, all cats are viewed as lucky and have been for centuries. 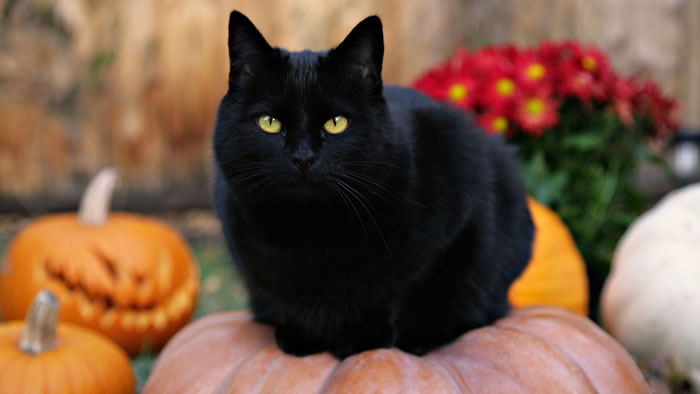 Plenty of black cat imagery shows its whiskers during Halloween time, but while you can (and should!) spread the good word of inky felines and their more positive associations during the autumn holiday, you can also honor the animals come summer, celebrating “Black Cat Appreciation Day” every August 17th.

Will you be having black cats Halloween time?