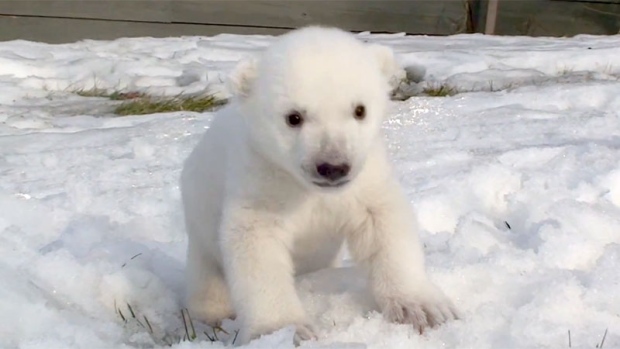 Stop what you are doing and watch this baby polar bear viewing snow for the first time at the Toronto Zoo, ins’t he adorable?

The cub, named Remy, was born in November and is the sole survivor of three cubs. Zoo staff have been raising the cub indoors, nursing it by hand and shooting plenty of adorable videos.

We’re not sure how Remy feels about the snow and the so-called ‘polar vortex,’ but seeing as how he’s a polar bear, we’re pretty sure those are oh-so-cute squeaks of joy.

The cub will be ready for its public debut sometime in the spring. In the meantime, here’s another video of Remy.

The Toronto Zoo opened on August 15, 1974, and is owned by the City of Toronto. The zoo is located near the Rouge River, along the western border of Rouge Park in city’s east end former borough of Scarborough.

Encompassing 287 hectares (710 acres), the Toronto Zoo is the largest zoo in Canada. It is divided into seven areas: Indo-Malaya, Africa, Americas, Tundra Trek, Australasia, Eurasia, and the Canadian Domain. Some animals are displayed indoors in tropical pavilions and outdoors in what would be their naturalistic environments, with viewing at many levels.

It also has areas such as the Kids Zoo, Waterside Theatre, and Splash Island. The zoo is currently home to over 5,000 animals representing over 450 species.

The Toronto Zoo makes considerable effort to conserve endangered species from around the world with the help of other accredited zoos. Breeding captive wild animals is a difficult challenge, but has resulted in the re-introduction of many species.

The Complete Guide to Stress Free Moving With a Pet

How to Select the Best Pet Medications

Why It’s Important To Keep Your Aquarium Clean