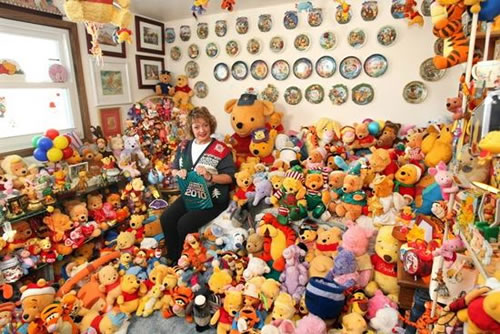 Deb Hoffman has won a place in the Guinness Book of Records for having the world’s largest Winnie The Pooh Collection which consists of around 9000 Pooh Bear themed items.

48-year-old Deb is probably also the world’s biggest Winnie the Pooh fan. Her collection of over 8,900 Winnie-themed items takes up four rooms of her house and this dedicated fan doesn’t plan on stopping anytime soon.

Deb Hoffman, a computer software designer, from Waukesha, Wisconsin, says her obsession with the lovable Winnie started when she was just 2 years old. Her father came home late one night, and as always, she used the old “I have to go to the bathroom” excuse just so she could go see him. Only this time he had brought something home with him in a box. Her mother put it in the bathroom where she could reach it, and the moment she put her hand inside and pulled out an adorable orange bear dressed in a bright red t-shirt with the letters P-O-O-H on the front, little Deb fell in love with it.

Over the years, the cuddly teddy bear remained her favorite toy, and by age 20 she had around 40-50 Winnie-themed items. Not exactly unusual, considering other kids collect hundreds of their favorite dolls or action figures. But at 22, Deb Hoffman married Gary, a careful and patient husband, and got a full-time job which provided her with some disposable income. That’s when her obsession with Winnie the Pooh really kicked into high gear.

In the beginning, she would collect around 20 Winnie items a year, but then she started noticing ornaments, figurines, Pooh toys more and more, and as her passion for the popular character grew, she started picking up new stuff every day. Now she has the world’s largest Winnie the Pooh collection and it keeps growing.

Whenever she saw things related to A.A. Milne’s characters, she bought them, all of them. Word of her passion for Winnie the Pooh quickly spread among her friends and family, and soon they started helping her with the growing collection by buying her new items for Christmas, birthdays and other holidays.

Husband Gary has always been very supportive, and says that as long as he gets to tease her about her obsession and she doesn’t kick him out of the bed to make more room for her stuff, he’s happy to help out.

They couple have even driven 24 hours just to pick up a single Winnie toy from Florida, and every year they travel to White River, a small Canadian town where the story of Winnie the Pooh and his friends was born. To find new additions for her collection, Deb scours thrift shops and always keeps an eye on sites like eBay. 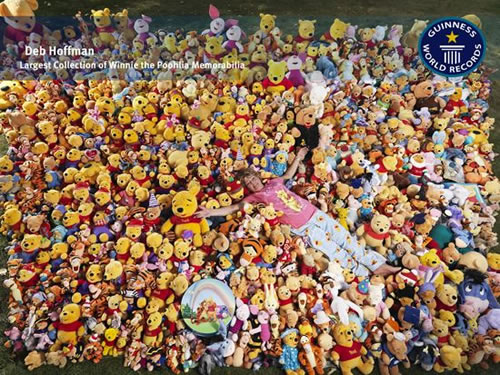 Hofman’s collection now numbers over 8,900 different items, including vintage memorabilia dating back to 1960, and even original Disney costumes thought to be worth around $1,000. The whole thing is currently taking up four rooms, and she’s recently been forced to hang part of her collection from the ceiling.

Deb estimates she has so far spent about $100,000 on her obsession, and although she says she might slow down in the coming years, she’ll probably never stop collecting.

Deb’s love for the famous children’s book characters is so strong that before Sears lost their exclusive contract to sell Winnie the Pooh items, she actually asked the store to let her dress up as the friendly bear and welcome kids, for free. They actually took her up on her offer.

While some people think her obsession is pretty cool, others just don’t understand why she needs so many things and wonder if she will ever grow up. “I’ve decided that while I am still having fun and collecting, Pooh makes me happy – I will NEVER grow up. Maybe if others had an obsession that made them smile and take themselves a little less seriously we’d all be a little happier,” Deb says.

Watch the video below with an interview with the owner of the world’s largest Winnie the Pooh collection.