Do you have a mother in law you don’t like? Well if you think yours is bad then check out these 9 mother in laws from hell that would ruin your whole life. 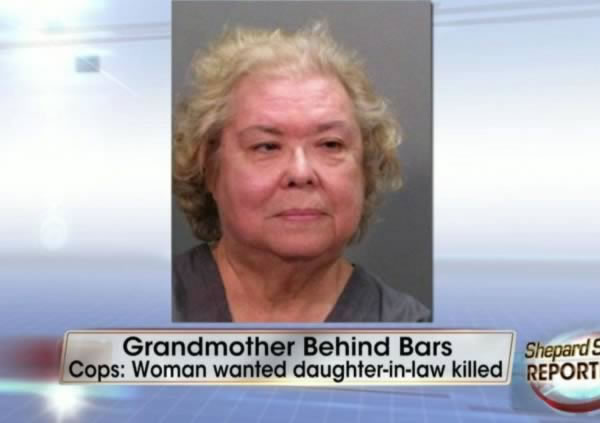 In 2013, a 70-year-old Florida grandmother was accused of hiring a hitman to murder her daughter-in-law. Diana Reaves Costarakis reportedly told an undercover agent that if he didn’t kill the woman, she would do it herself. How is that for ruining your whole life?

Florida police say that Costarakis claimed her son’s wife was a drunk who was planning on leaving him and taking their child to Colorado. Angela Costarakis denies those allegations and said she had no idea her mother-in-law had it out for her. About three weeks before the incident, Angela said her mom-in-law gave her a hug and told her, “I’m so glad we’re great friends.”

Costarakis supposedly offered the undercover cop a $5,000 bounty. She was charged with criminal solicitation for conspiring with the officer at a Home Depot. Costarakis paid him $1,500 in cash and allegedly said he could take the jewelry off of the woman’s dead body for the rest of the bounty. 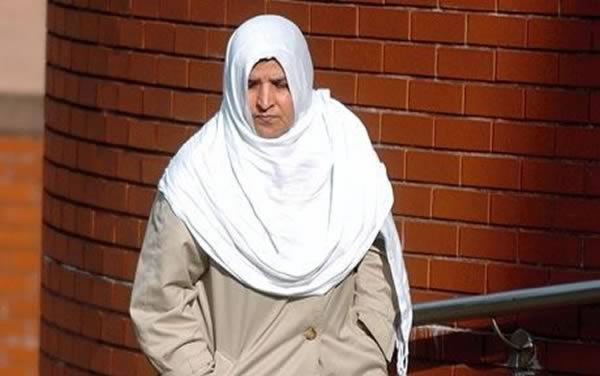 According to court hearings, a cruel mother-in-law in England treated her sons’ wives like “slaves and dogs,” making one of them work day and night on a sewing machine. Naseebah Bibi allegedly ruled her household with a regimen of beatings and threats as she “totally dominated” the women over 13 years.

The three – Nagina Akhtar, Tazeem Akhtar and Nisbah Akhtar – went to Britain from Pakistan as part of arranged marriages expecting to live happily with their husbands. But they were kept prisoner at 63-year-old Bibi’s home in Blackburn, denied access to the outside world and made to do ‘gruelling work’.

Tazeem, who came to Britain in 2001, found husband Nahim already had a partner and two children and had no intention of living as his wife. Her phone calls were monitored, she was allowed to leave the house only once and was beaten if she refused to work.

Nagina married Bibi’s other son Fahim and was ordered to spend her time sewing as soon as she arrived in England in 1993. She was ordered to sew for money all day, every day. She received no money as Naseebah Bibi took it away. She had a baby after eight years but Bibi stepped in to look after the youngster so she could ‘carry on sewing’.

Her third daughter-in-law, Nisbah, moved to the home in 2005 after she married Nadeem. She was allegedly banned from using the phone and beaten up.

Their ordeal ended in 2006 when Nagina’s son told nursery staff that his grandmother hurt his mother.

When her scathing email on etiquette started circling the globe, stepmother Carolyn Bourne became known as the world’s most famous monster-in-law.

In 2011, Bourne, 60, wrote to her then future daughter-in-law Heidi Withers after the bride-to-be spent a weekend at the family’s home in Devon. In the email, Bourne criticizes Withers for her “lack of grace” and calls her “an ideal candidate for the Ladette to Lady television series,” which sends foul-mouthed young women to finishing school. “It is high time someone explained to you about good manners,” she writes. “Yours are obvious by their absence and I feel sorry for you.”

She goes on to describe Withers’ visit as “staggering in its uncouthness,” and suggests that the 29-year-old woman , who works as a personal assistant in London, is a gold digger with tastes far above her station. “I understand your parents are unable to contribute very much towards the cost of your wedding,” wrote Bourne, who lives in a five-bedroom, $800,000 home. “There is nothing wrong with that except that convention is such that one might presume they would have saved over the years for their daughters’ marriages. If this is the case, it would be most ladylike and gracious to lower your sights and have a modest wedding as befits both your incomes.”

A shocked Withers forwarded the character assassination to a group of girlfriends, who then passed it along to their nearest and dearest acquaintances. A few days later, excerpts from the email had been broadcast on Britain’s biggest morning news programs, appeared in most of the national newspapers, and been posted on websites from England to India to Australia. (The Sun published its take under the amusing headline “The Mrs. Bourne Ultimatum.”) More than a few online posts dubbed Bourne, who is a championship flower grower, as the “mother-in-law from hell.”

A few months later, the couple went ahead and tied the knot without the upper-crust Carolyn Bourne, who had castigated their big day as “brash, celebrity-style behavior”. Bride Heidi Withers wore a bizarre veiled parasol which completely covered her head, leaving her unable to see and dependent on groom Freddie Bourne to steer her around. 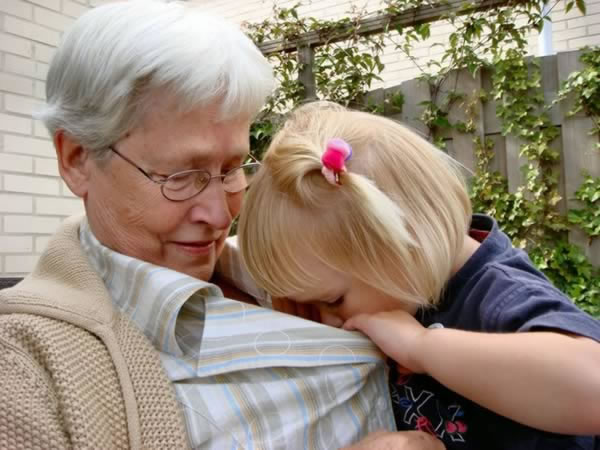 Imagine giving your baby to your mother-in-law to hold only to find out moments later that she’s trying to breastfeed your baby! That’s what happened to a new mom who has a bad relationship with her in-law.

According to the shocked mother, the granny had one boob out and was attempting to nurse her grandson. She chuckled and said, “Oh that one’s not working. Let’s try this one!” before switching the infant to the other breast, where he suckled her nipple.

When friends told the grandfather (husband to the nursing grandma) about his wife’s actions, he shrugged it off at first. But then he confronted his wife, saying, “Honey, did you really try to breastfeed the Bambino?” Abashedly she replied, “I’m not going to talk about it anymore! All I will say is that it was a good bonding experience for both of us!” 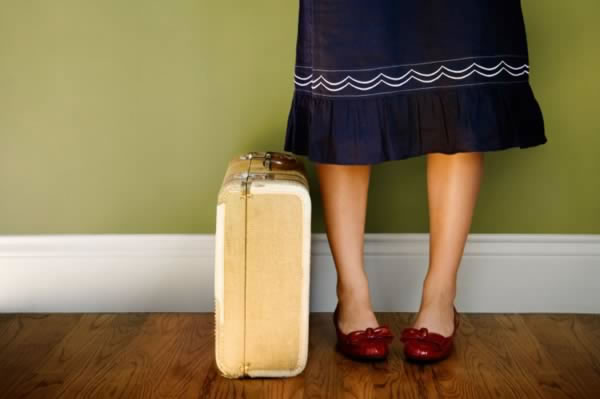 It’s normal for couples to have in-law issues, but they generally don’t begin on the honeymoon. Unfortunately, that wasn’t the case for an Italian woman named Marianna, whose mother-in-law showed up on their post-nuptial trip to France. The couple, from Rome, got married in a church ceremony after a 12-month romance. Apparently, the bride didn’t know that her new mother-in-law planned to come along; she simply appeared at the Rome airport, queued for security, and boarded the flight with the unhappy couple.

The infuriated newlywed asked her husband to send his mom home, but the mama’s boy refused, citing health reasons. The 36-year-old woman spent three weeks in France and then requested a divorce because her husband maintained an “excessive emotional attachment” to his mother. Marianna has since left the marital home for Naples. 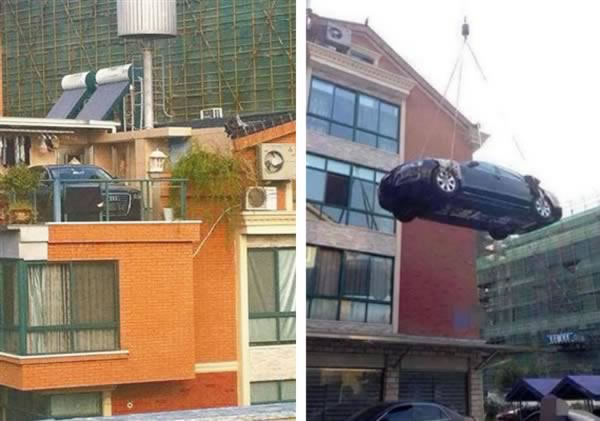 A Chinese woman had enough of her son-in-law’s constant excuses for not paying back his loan, so she went to extreme measures to force his hand. Wang Qin hired a crane to lift her son-in-law’s car onto her house terrace to ensure that he returned the money he had borrowed from her.

Mrs. Wang, from Lishui, Zhejiang Province, had been keeping the car as collateral, but turned up the heat when she got tired of waiting. According to Mrs. Wang, she had lent her son-in-law nearly half-a-million yuan so he could invest in his business.

She began by holding his car hostage, but after she found out that he had secretly been trying to retrieve it from outside her home, she lost her patience.

Mrs. Wang rented a crane and hoisted the Audi onto her terrace, out of reach of her son-in-law.

Mothers-in-law can be really mean sometimes, but I must say that I agree with this one.

Ok, so this guy’s whole life wasn’t ruined by his mother in law but it sure is a bizarre story. In an unprecedented move, a man and his mother-in-law defied all social norms and got married two years after the death of the late wife.

Judah Magarasadza’s wife Rozie Gopoza died in 2008, and two months later his mother-in-law, Felistus Gopoza, moved in with him. It is reported that the two then began a romantic relationship which culminated in them tying the knot in 2010. The wedding reception is understood to have been low key. This was a result of the two families’ refusal to bless the marriage.

After the man died, things took a downward trend for the mother-in-law turned wife. Sources said that the woman was barred from the funeral by her husband’s relatives, who vehemently told her that they did not recognize her relationship with their son.

Singh claimed that her mother-in-law, who lived with the couple in Ilford, east London, kept her as a virtual prisoner and forced her to rise at 6:30 a.m. to perform “excessive and unnecessary” household chores, including cleaning the toilet without a brush.

She claimed that she was prevented from attending a Sikh temple, had visits to her family restricted, and her telephone calls monitored. Singh said that Bhakar forced her to cut her hair — despite religious objections — and would not let her register with a doctor after she developed a hand infection.

Singh and her husband divorced in 2003. She sued under the Protection from Harassment Act, which was introduced in 1997 to deter stalkers. It is believed to be the first time that the act has been used in such a way.

9. Mother-in-Law Calls Half The Wedding Guests And Falsely Informs Them It Was Cancelled 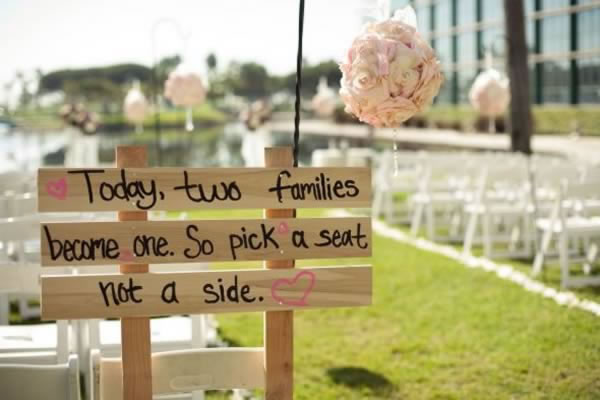 A man won a radio contest looking for the worst mother-in-law after describing his ordeal during their wedding. According to the unlucky man, his mother-in-law disapproved of the wedding so much that the day before the wedding she called everyone on the bride’s side (without the bride knowing) and said that the wedding was off. She explained that they had broken up and that the groom was going to jail.

When the wedding day came, only half of the people showed. Then, the mother of the bride told her daughter that it’s probably because no one approves of the wedding! It may not of ruined her whole life but it certainly ruined the wedding.

Do you have a mother in law that is ruining your whole life?