What Is A Muscle Car? Discover The Car’s Origins And More 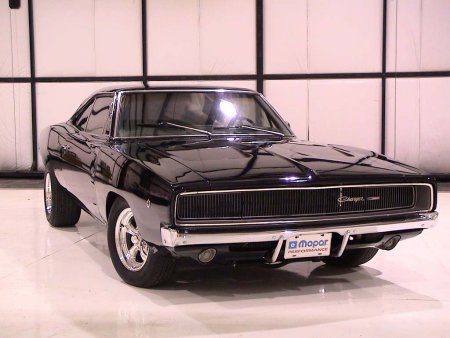 What is a muscle car? The name is used for a variety of high performance automobiles. The term is most commonly used when referring to American 2-door rear wheel drive mid-size cars equipped with large, powerful V8 engines.

These muscle cars are distinctly different from two-seat sports cars and expensive 2+2 GTs intended for high-speed touring and road racing.

According to the June 1967 issue of Road Test magazine, a “muscle car” is “Exactly what the name implies. It is a product of the American car industry adhering to the hot rodder’s philosophy of taking a small car and putting a BIG engine in it.

Author of the book Muscle Cars, Peter Henshaw, quotes that the muscle car was designed for straight-line speed, and did not have the “sophisticated chassis”, “engineering integrity” or “lithe appearance” of European high-performance cars.

There are many mixed opinions as to whether high-performance full-size cars, compacts, and pony cars all qualify as muscle cars. 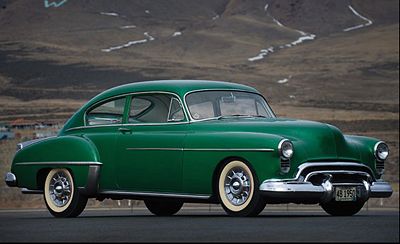 Opinions on the origin of the muscle car vary, but the 1949 Oldsmobile Rocket 88, created in response to public interest in speed and power, is often cited as the first of the breed. It featured an innovative and powerful new engine—America’s first high-compression overhead valve V8 in the lighter Oldsmobile body.

The all-new ohv V8 Rocket engine quickly found its way into the lighter 76 series body, and in February 1949, the new 88 series was born.

The Oldsmobile Rocket 88 dominated the performance landscape in 1950, including wins in the NASCAR Grand National division, Daytona Speed Weeks, and the 2100-plus-mile Carrera Panamericana.

With a displacement of 303 cubic inches and topped by a two-barrel carburetor, the first Rocket V-8 churned out 135 horsepower at 3,600 rpm and 263 pound-feet of torque at a lazy 1800 rpm. No mid-range car in the world, apart from the Hudson Hornet, came close to the Rocket’s performance potential.

Growth of the muscle car trend 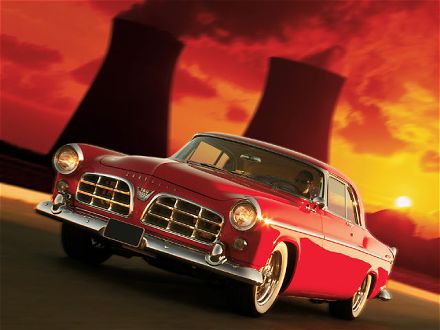 Other manufacturers shortly followed with their own high performance models. Chrysler led the way with its 1955 C-300, an inspired blend of Hemi power and luxury-car trappings that fast became the new star of NASCAR. With 300 horsepower, it was rightly advertised as ‘America’s Most Powerful Car.

Capable of accelerating from 0 to 60 mph (97 km/h) in 9.8 seconds and reaching 130 miles per hour (209 km/h), the 1955 Chrysler 300 is also recognized as one of the best-handling cars of its era. Two years later the Rambler Rebel became the fastest stock American sedan, according to Motor Trend.

The popularity and performance of muscle cars grew in the early 1960s with Dodge, Plymouth, Chrysler and Ford battling for supremacy in drag racing.

By 1964, there were Oldsmobile, Chevrolet, and Pontiac muscle cars in GM’s lineup, and Buick joined them a year later. For 1964 and 1965, Ford had its 427 cu in (7 L) Thunderbolts, and Mopar unveiled the 426 cubic inch (7 L) Hemi engine. The Pontiac GTO was an option package that included Pontiac’s 389 cubic inch (6.4 L) V8 engine, floor-shifted transmission with Hurst shift linkage, and special trim. 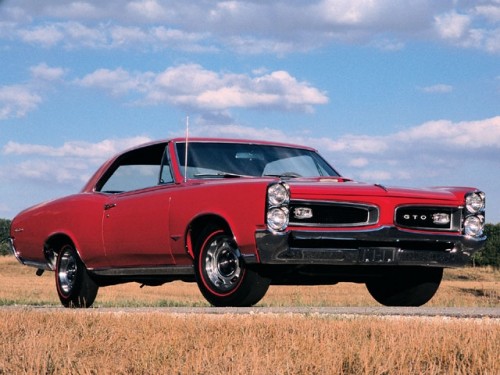 In 1966 the GTO became a model in its own right. The project, spearheaded by Pontiac division president John DeLorean, technically violated GM’s policy limiting its smaller cars to 330 cubic inch (5.4 L) displacement, but the new model proved more popular than expected and inspired GM and its competitors to produce numerous imitators. The GTO itself was a response to the Dodge Polara 500 and the Plymouth Sport Fury.

American Motors, though late entering the muscle car market, produced “an impressive array of performance cars in a relatively short time,” said Motor Trend. The first stirrings of AMC performance came in 1965, when the dramatic if ungainly Rambler Marlin fastback was introduced to battle the Ford Mustang and Plymouth Barracuda.

Although the Marlin was a flop in terms of sales and initial performance, AMC gained some muscle-car credibility in 1967, when it made both the Marlin and the Rebel available with its new 280 horsepower, 5.6 L “Typhoon” V8. In 1968 the company offered two legitimate muscle car contenders: the Javelin and its variant, the AMX.

Although the sales of true muscle cars were relatively modest by total Detroit production standards, they had value in publicity and bragging rights. Competition between manufacturers meant that buyers had the choice of ever-more powerful engines, a horsepower war that peaked in 1970, with some models offering as much as 450 hp. 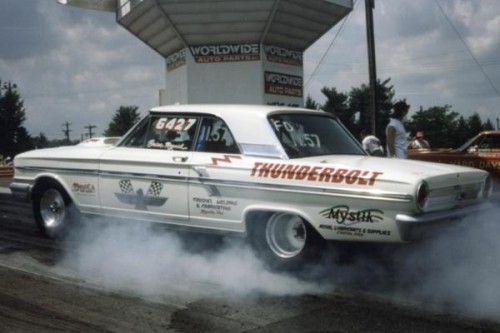 Muscle cars attracted young customers (and their parents) into showrooms, and they bought the standard editions of these mid-size cars. To enhance the appeal effect of these models, the manufacturers modified some of them into turn-key drag racers.

This full-size car could run the quarter mile in a little over 12 seconds. Also built in 1963 were 5,000 road-legal versions that could be used every day. (Ford claimed 0-60 in less than 6 seconds for the similarly-powered 1966 Galaxie 500XL.

Another Ford lightweight was the 1964 Ford Thunderbolt that utilized the mid-size Fairlane body. A stock Thunderbolt could run a quarter-mile (402 m) at a drag strip in 11.76 seconds at 122.7 mph (197.5 km/h). The Thunderbolt included competition-specification 7 Liter engine and special exhausts. Sun visors, exterior mirror, sound-deadener, armrests, jack, and lug wrench were omitted to save weight.

The car was given lightweight Plexiglass windows, and early versions had fiberglass front body panels and bumpers, later changed to aluminum to meet NHRA regulations. Base price was US$3,780. 111 Thunderbolts were built, and Ford contracted Dearborn Steel Tubing to help with assembly. Factory records show that the first 11 cars were maroon and the subsequent 100 were white.

Like other lightweights of the era it came with a factory disclaimer: Designed for supervised acceleration trials. Not recommended for general everyday driving because of the compromises in the all-round characteristics which must be made for this type of vehicle. 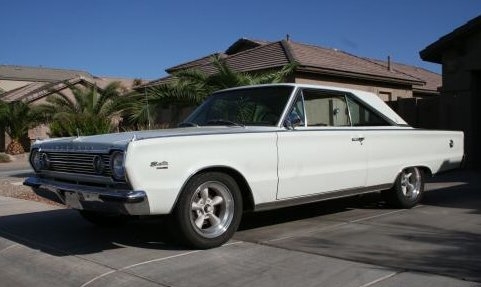 Also too “high-strung” for the street was Chrysler’s small-volume-production 1965 drag racer, the 550 bhp Plymouth Satellite 426 Hemi. Although the detuned 1966 version has been criticized for poor brakes and cornering, Car and Driver described it as “the best combination of brute performance and tractable street manners we’ve ever driven.” The car’s understated appearance belied its “ultra-supercar” performance: it could run a 13.8-second quarter mile at 104 mph (167 km/h). Base price was $3,850.

Decline of the American muscle car 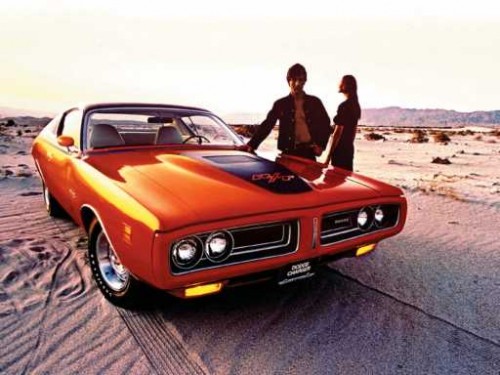 The automotive safety lobby led by Ralph Nader decried offering powerful cars for public sale, particularly when targeted at young buyers: the power of many muscle cars underlined their marginal brakes, handling, and tire adhesion. In response, the automobile insurance industry levied surcharges on all high-powered models, an added cost that put many muscle cars out of reach of their intended buyers.

A majority of muscle cars came optioned with high-compression powerplants – some as high as 11:1. Prior to the oil embargo, 100-octane fuel was common until the passage of the Clean Air Act of 1970 where octane ratings were lowered to 91 – due in part of the removal of tetraethyl lead as a valve lubricant. Unleaded gasoline was phased in.

With all these forces against it, the market for muscle cars rapidly evaporated. Horsepower began to drop in 1971 as engine compression ratios were reduced. High-performance engines like Chrysler’s 426 Hemi were discontinued, and all but a handful of other performance models were discontinued or transformed into soft personal luxury cars.

Some nameplates e.g. Chevrolet’s SS or Oldsmobile’s 442 would become sport appearance packages. One of the last to succumb, a car that Car and Driver dubbed “The Last of the Fast Ones”, was Pontiac’s Trans Am SD455 model of 1973–1974.

American performance cars began to make a return in the 1980s. Owing to increases in production costs and tighter regulations governing pollution and safety, these vehicles were not designed to the formula of the traditional low-cost muscle cars.

Another golden age of American high performance has been ushered in with a range of remarkable modern muscle cars. These machines combine the speed and power of their hallowed ancestors but add new elements of safety, handling, reliability, and even fuel economy.

Recently we have seen the return of the: 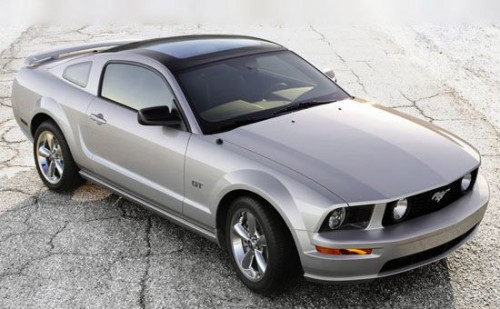 Armed with its new engine, not to mention having the lowest base price and highest EPA fuel economy of the pack, the 2011 Ford Mustang GT is a force to be reckoned with.

This time around, the GT sports the “5.0″ badge once again and delivers 412 horsepower and 380 lb-ft of torque from its new engine. But perhaps what’s most impressive is that it also earns a class-leading 26 mpg highway and 17 mpg city. That’s not too bad for a car that can go from 0 to 60 mph in just 4.4 seconds. 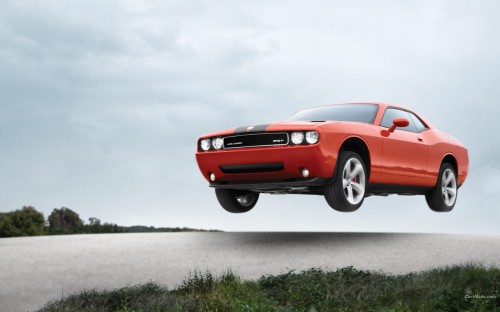 As the biggest car in the group, the Dodge Challenger SRT8 definitely makes its presence known. Powering the Challenger SRT8 is the 6.1 liter HEMI V8 engine that produces 425 horsepower and 420 lb-ft of torque. Despite all that power, the SRT8 has the grip and the stopping power to match. Going into corners, the suspension is also firm enough to nearly eliminate body roll, but its also forgiving enough for daily driving. 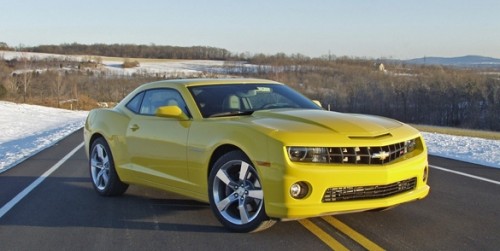 In 2010, Chevrolet brought back the Camaro after a long hiatus. From the pricing, to its engines, to its fuel economy, and even its interior quality, the 2010 Chevy Camaro is everything the Camaro should be and more.

Power is supplied by a 6.2-liter LS3 V8 engine offering 422 horsepower and 408 lb-ft. of torque. Helping to make this car a competitive all-around performer is a near perfect 52/48 weight distribution, massive Brembo brakes, and wide track. Not only is the Camaro a beast on the track, but it also delivers a controlled and rather refined ride for everyday driving.

So now you know what is a muscle car, who wants one?