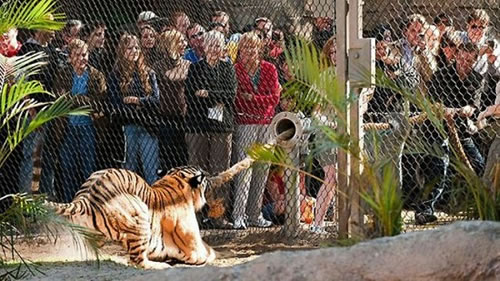 Visitors to the Busch Gardens Zoo in Florida are now allowed to play tug of war with Tiger. Guests have been queuing up to test their strength against the mighty big cat.

Zoos are changing and finding new innovative ways to increase visitors. Just recently Lujan Zoo starting allowing guests to get in cages with all kinds of wild animals and pet them, and now Busch Gardens are giving people the chance to play tug of war with tigers.

Check out the video below to watch people play tug of war with a tiger at Busch Gardens.

Even though the chances of beating a 450-pound Bengal tiger at tug of war are slim to none, there’s no shortage of human volunteers willing to test their muscles against the magnificent feline.

The interactive zoo exhibit is called “Tiger Tug” and requires confident participants to grab on a thick rope, while the tiger facing them on the other side of two metal fences bites the other end. I’m not sure if the Bengal felines have ever lost a game, but the humans seem to love it anyway.

But even though the popularity of Tiger Tug has remained high since it’s introduction at Busch Gardens, not everyone is happy about it. Comments to videos posted online, and on the zoos Facebook invitation call this unique show “beyond stupid and cruel” and “wrong in every way”, among other things.

There are a lot of people who believe zoos like Busch Gardens and Lujan are exploiting wild animals for profit, completely ignoring the animals’ welfare. While I understand and appreciate their concern for the caged tigers, is Tiger Tug really that wrong?

What many protesters probably haven’t noticed is the tigers aren’t really forced to grab the rope and pull on it, they actually seem to enjoy it, just like domestic cats like pulling on things when you’re playing with them in your own home. Playing Tiger Tug actually helps the tigers stay in shape, as it’s a known fact that felines in captivity are prone to laziness and tend to become obese.

This kind of exercise seems to keep them fit and entertained, and as long as they aren’t forced to do it, I don’t have any objections. Perhaps people have a problem with the entertainment factor for humans, which makes seems degrading to the mighty felines, but I don’t think the tigers feel at all humiliated. I’m not saying I don’t have a problem with animals being caged for our entertainment, I just don’t think there’s anything particularly wrong with Tiger Tug.

Personally I would love to play tug of war with tiger. Don’t think I would win though LOL.

Would you like to play tug of war with a tiger?