Power Board Ungoverned Can Tackle Any Terrain – Who Wants One?

A new power board has been invented which appears to be able to tackle any terrain. It is fitted with tracks instead of traditional wheels and can easily handle rocks, sand and snow. Check out this cool gadget in action in the video below.

In its early says, skateboarding was known in some circles as “sidewalk surfing,” but lately we’ve seen a number of power boards designed to leave the street behind and head off road. In 2009 one such prototype board known as the Scarpar Powerboard was launched. The inventor of that board, Dan Baldwin, has now developed another prototype all-terrain board called the Ungoverned that is designed to tackle everything from rocks to snow.

Resembling a cross between a caster board and a tank, the current Ungoverned 1 prototype rides on two caterpillar tracks that are powered by a four-stroke engine. However, Baldwin says it’s a relatively easy process to swap out the engine so there are plans to offer a battery-powered electric motor as an option if and when the Ungoverned makes it to market.

The power board is designed to seamlessly transition between various types of terrain without the need to change the tracks and has been tested on rocks, sand and dirt. Baldwin is planning snow trials in the near future. Acceleration is controlled by a wired hand controller but the Ungoverned’s maximum speed hasn’t yet been announced. Of course, speeds are sure to vary across different terrain.

With Australian startup Scarpar Pty Ltd established to further develop and bring to market Baldwin’s original Powerboard (which is due to occur next year), he is hoping to gain attention from Scarpar or another company to bring the Ungoverned to market. 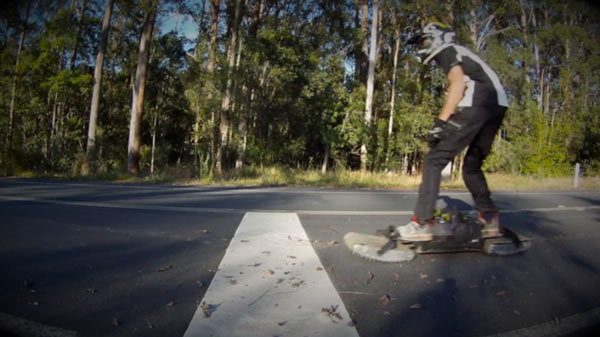 So who wants an Ungoverened power board and where would you take it?