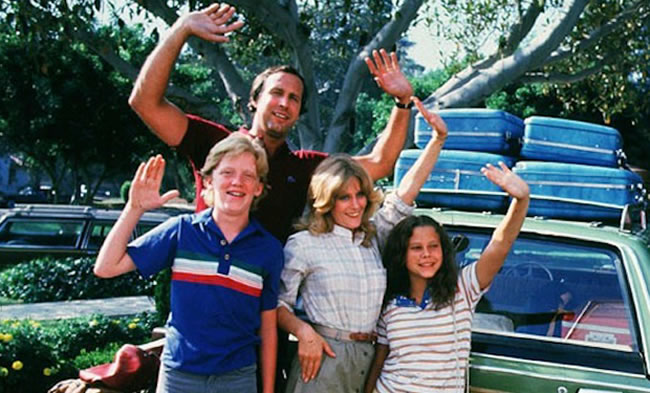 Hollywood has given us some great travel movies over the years. From the iconic Easy Rider to the action-packed Thelma and Louise, travel movies often bring back memories of our own trips.

Some memories are good while others, not so much. At any rate, the travel movie is a proven Hollywood vehicle not likely to fade away any time soon.

For my money, the best kind of travel movie is a road trip comedy. There is a load of gags you can insert into a road trip. And what makes it so funny is that we’ve all been there. We have all experienced that road trip that, come hell or high water, we were bound and determined to complete. It’s all good.

In honour of road trippers everywhere, here is this writer’s list of the top five funniest travel movies of all time:

It is hard to have a discussion about road trip comedies without at least mentioning National Lampoon’s Vacation. For some, the 1983 comedy starring Chevy Chase and Beverly D’Angelo is the standard by which all other road trip comedies are judged. This one has it all.

The film is about a suburban Chicago family who takes a road trip to California to visit a famous theme and amusement park. Along the way, they encounter some of the same miseries we have all experienced on the road. Of course, the film takes those miseries to the extreme. That is what makes it funny.

Perhaps the funniest gag in the entire film is the untimely demise of Aunt Edna – and how main character Clark Griswold decides to handle it. No spoilers here. If you haven’t seen the film, it’s worth watching.

The film picks up with the Griswold family many years after the original Vacation movie. This time, they are preparing to celebrate Christmas at home with both sets of grandparents coming in from out of town. Unfortunately for Clark, his broke and homeless cousin-in-law shows up on the doorstep with his family as well. There is definitely a lot of bathroom humour in this one, including a gem of a scene featuring cousin Eddie emptying his RV’s black water tank into the neighbourhood storm sewer.

Steve Martin and John Candy star in this film about a couple of unlikely travellers who become both enemies and best friends while trying to get from New York to Chicago in time for Thanksgiving. Martin

plays the stuffy and reserved businessman to Candy’s brash and uncultured travelling salesman.

Along the way it becomes apparent the duo should have shopped around for the best travel first aid kit bags they could find before hitting the road. They more or less lose everything they own. They completely destroy a rental car in fine fashion. They defy the laws of physics and common sense so many times that it’s a wonder they made it to Chicago alive.

An illegal, cross country race from Connecticut to California is the backdrop for this comedy starring Dom DeLuise and Burt Reynolds. In addition to being side-splittingly funny, one of the things that makes this film so delightful is the fact that its producers set out to cast as many big-name celebrities as were willing to get involved.

Joining the race with Reynolds and DeLuise were Sammy Davis Junior, Dean Martin, Adrian Barbeau, Jackie Chan, Terry Bradshaw, Mel Tillis, Roger Moore, and many, many others. Each of the characters had his or her own quirks that played perfectly into the story’s mayhem. Perhaps the funniest scene is one involving the main characters’ ambulance being pulled over by state troopers.

The final travel movie on our list is the Dan Aykroyd and John Belushi movie Blues Brothers. This particular film has an almost cult-like following thanks to perfect casting, a great score, and one of the more believable storylines among all road trip comedies.

The film features two brothers, Jake and Elwood Blues who are on a quest to save the Catholic orphanage where they grew up. They plan to reunite their old band that fell apart while brother Jake was in prison. Early on in their mission, it becomes apparent that brother Elwood is wanted by the police. A wild chase ensues as the brothers attempt to get the band back together and hold a benefit concert to save the orphanage before Elwood lands in prison.

For many of us, the Blues Brothers film was our introduction to the fact that Belushi and Aykroyd were actually accomplished musicians. That’s a different topic for another post, though.

Hollywood has given us some great travel movies. Have you seen the five on this list? If not, you really ought to. They are all great films with plenty of laughs from start to finish.