Thornton Breaks Record For Biggest Chocolate Bar In The World 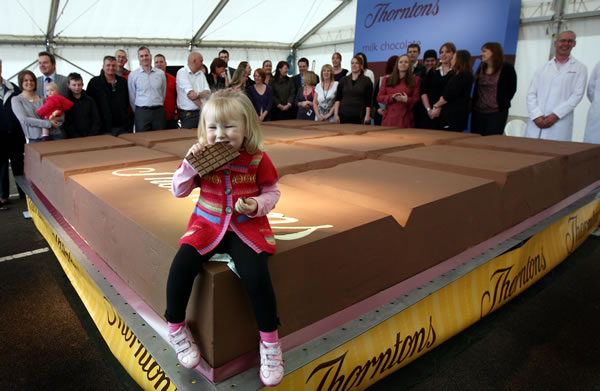 At almost 6 tons, Thornton breaks the record for the biggest chocolate bar in the world.

Chocolate maker Thorntons has broken the record for the world’s largest chocolate bar after creating a monster that weighs almost six tons (5,792.5kgs) – measuring in at four meters wide by four meters long.

Thorntons produced the mega bar to celebrate its 100th birthday – and judging by the size of the super snack there’ll be a lot of bulging stomachs as a result of this confectionary construction.

The idea for the record breaking bar came from a chocolate loving employee who was a big fan of Charlie and the Chocolate Factory.

Paul Bell, from Thorntons said: “All staff were asked to come up with ideas of how we should celebrate our 100th birthday and, because Charlie and the Chocolate Factory was my favorite film as a child, I immediately thought of a scene from the film where a bar of chocolate was shrunk and I thought – “wouldn’t it be fantastic to do the reverse and make the world’s largest bar of chocolate”.’

The previous record was held by American confectionery maker World’s Finest Chocolate, who managed to create a treat weighing in at an impressive five-and-a-half tons (5,529.29kg).

Thorntons Master Chocolatier, Keith Hurdman, said: ‘It’s been one of the biggest challenges we’ve ever had to face here at Thorntons, and has put all of our chocolate-making expertise to the test.

‘I’m really proud of all of the team; it’s taken months of planning and over 50 people were involved in the making of it so the Guinness World Records title is a fantastic achievement and a great way to celebrate our 100th birthday.’

The giant bar has been unveiled to coincide with Chocolate Week, which runs from October 10 to October 16,

The public can get in on the act and sample the record breaking choc when it is broken up and sold in Thortons stores in the coming weeks.