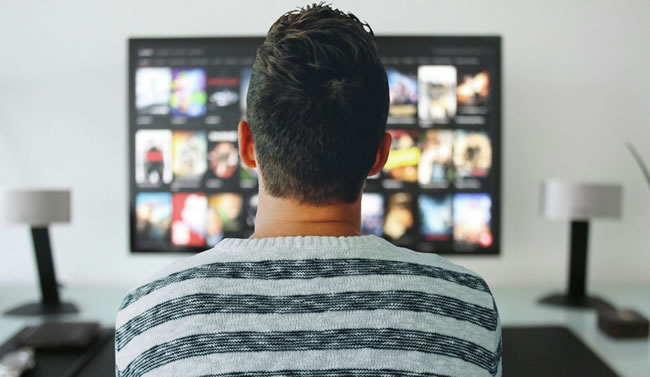 On average, the typical Brit will watch a staggering 10 years of television in their lifetime – spending the same amount of time in front of the TV as it would take to build two Hoover Dams.

So imagine what you could do if you put the remote down and spent just half that time doing something else… Like learning a language.

The idea of picking up a whole new language can be pretty daunting, particularly if you never studied one at school or just didn’t get on with the process. But by pairing something like a free language app with an existing love of television, you’d be surprised just how much lingo you can learn. If you’d like to boast about being bilingual but prefer to spend time on the sofa rather than in study class, here are some pointers to get you on your way.

Deciding Which Languages to Learn

In areas of Quebec it is necessary to be capable at least of conversing in French and English. Along much of the southern border of the United States are areas where it is virtually mandatory to speak both English and Spanish. While the people of Britain would not be so urgently pressed to learn Welsh or Gaelic these days, the increasing culturally diverse nature of London and many other large cities makes it more than just beneficial to learn at least one additional language.

In many parts of Europe, it is common for people to grow up speaking more than one language, though these are generally limited to those of the closest border nations. In England, the isolation of the nation is such that by and large, proper English has been sufficient to meet the needs of the people. In the London of today, as in many other larger cities within the United Kingdom, the global refugee crisis and other matters of emigration are rapidly changing this scenario.

Rather than being overtaken by misgivings or other concerns, a fuller cultural integration and understanding is easily accomplished. Learning even snippets of these local languages will allow you to shop freely in the shops, restaurants and other locations, and to engage in a more intimate and personal understanding of the cultures that will be influencing the future direction of the United Kingdom. The best languages to learn in 2020 will inevitably be those that are relevant to the local population.

As you begin your televisual journey into language-learning, it’s best to keep things simple. And one of the best ways to do this is to ease yourself into your target language using kids’ TV.

This may sound silly at first, and perhaps a little embarrassing, but children’s TV programmes are meant to be educational. The language is also kept basic, and often supplemented with images, so in reality it’s the perfect place to start.

Once you’re feeling more confident with your target language, you can then move on to more complicated programming, like kids’ movies. These are more complicated in terms of narrative but still involve relatively unsophisticated language, so you should still be able to understand what’s going on. If you have kids, watching these together is also a great bonding experience as well as an educational activity.

After exhausting all of the kids’ films you can find, the next step is to migrate to more complex programming that you’re already familiar with. In this case, watching first-language sitcoms is usually a good choice.

Light comedies like Friends or The Simpsons are popular the world over and are therefore easy to find with subtitles or dubbed in your target language. Facial expressions and body language are typically used to emphasise the humour too, making it easier to interpret.

Having a rough idea of what happens in each episode can also help you to piece together the narrative and better understand what the characters are saying.

Having made progress watching sitcoms, the next step is to move on to films – action movies to be precise. These should start to test your comprehension, as the language will be more varied and a little more grown-up. However, where action movies tend to be quite formulaic, what’s going on shouldn’t be too difficult to grasp.

As you move into the realm of more complex language, it’s worthwhile noting down words that you don’t understand and looking them up later, particularly colloquial phrases or idioms. For example, speaking English may be a piece of cake for you, but les doigts dans le nez for a French speaker.

The final genre is drama. This is probably the most difficult set of programmes to understand, as they tend to be more sophisticated linguistically. The language may also incorporate subtle humour, irony or culturally specific words that you need to research – if you really want to test your mettle at this stage, you can even find an original drama set in your target language’s country of origin.

If you’re struggling to find programmes that interest you in your target language, there are a few hacks that you can employ to access foreign programming and subtitles.

First, if you’re subscribed to a streaming service, try changing your language and audio settings. This can unlock foreign-language subtitles and voice overs, but may only work for programmes considered ‘international’ by your provider.

Alternatively, you can access streaming services targeted at other countries.

You can do this using a virtual private network (VPN). These work by directing your data through a series of private servers located around the world, which means you can give the appearance that you’re connecting to the internet from a different location. In doing so, you can browse region-locked services – like French and Spanish television channels, or a different digital cinema catalogue.

How to learn while you watch

For easy language learning it is good to watch TV shows in a foreign language, this way you make more of your time screen-gazing, but it takes more than simply turning the subtitles on. To really gain anything from foreign-language programming, you have to actively engage in the subject matter. So before you get started, make sure you’ve created the right environment for learning, with a comfortable chair, plenty of light, and a pen and paper.

Start by watching programmes in English, but with foreign subtitles switched on. This will help you to start connecting familiar words to their foreign counterparts. After a while, and when you’re starting to feel a bit more confident, you can then switch to audio in the new language too. This will test your listening skills and help you to differentiate words one at a time.

Whatever you do, don’t be tempted to put subtitles in your native tongue back on after changing the audio – this runs the risk that you simply end up reading the screen without taking the new language in.

Finally, find a programme you already know, perhaps one of the sitcoms we mentioned earlier, and watch it with the audio dubbed. This will help you to slowly relinquish your lingual training wheels, and get you used to watching foreign programming without the need for subtitles. Learning a language can be tricky and a little daunting at first, but by consolidating language-learning with your favourite pastime, you can make getting started a lot less intimidating and much more fun.