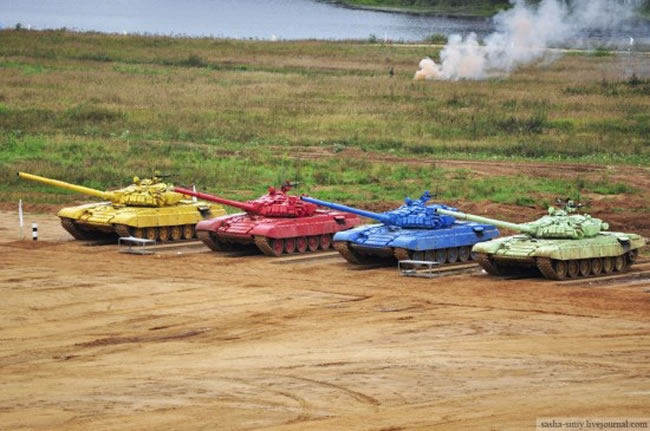 Longing for something a bit more wild the Russian Military have come up with a new type of sport which involves tank racing games. This sort of Biathlon requires tank crews to guide their vehicles across an obstacle course and prove their accuracy by shooting various targets, in as little time as possible.

The world’s first ever tank biathlon was held at the Alabino proving ground,Russia, in August 2013 and pitted tank crews from several of Russia’s Military Districts against teams from three ex-Soviet countries: Kazakhstan, Armenia and Belarus.

All teams competed in T-72Bs tanks, an iconic weapon for all post-Soviet armies, and had to complete three 6,100 meters-long laps across a large racing field while completing different objectives. During the first round, crews had to use the tank’s main gun to hit targets at distances of up to 2,200 meters, which is close to their maximum range, while racing across the field in minimal time. Failure to miss a target cost the teams a 500-meter penalty lap.

[SEE ALSO – Ever Wanted To Do Tank Driving? Now Here Is Your Chance]

In the second round, teams had to use the tanks’ 7.62mm coaxial machine gun to hit targets imitating anti-tank mortar (RPG) squads and infantry units, placed at distances of between 600 and 700 meters.

During the final round, crews had to maneuver their tanks across an obstacle course as fast as possible that included a scarp, ford, minefield, bridge and roadblocks. Missed or crashed obstacles added a 10-seconds increment to the teams’ final timing. 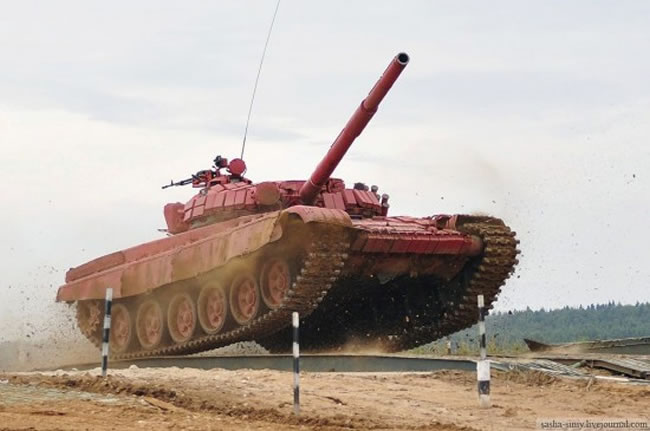 The inaugural tank biathlon was considered a success, but Russian Defense Minister Sergei Shoigu, who is credited as the inventor of the event, expects it to grow even more in the following years. The Russian military has already extended an invitation to the United States, Germany and Italy to compete in the 2014 edition of tank biathlon, in their own tanks, and prove who has the superior technology and maneuvering skills.

Shoigu claimed that US Secretary of Defense Chuck Hagel had already approved US participation next year, but Colonel R. Taft Blackburn, US Army Attaché in Russia, told Russian press agency RIA Novosty this was not the case. “It is an interesting idea, but there are many issues at stake,” he said. Germany is also still considering whether to accept the invitation. 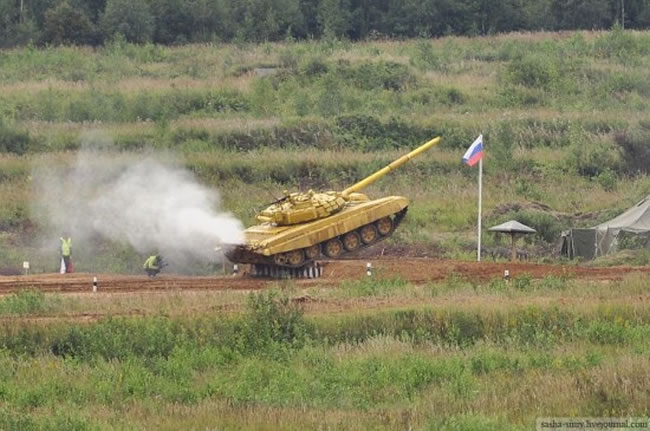 Unfortunately for tank enthusiast the world over, no tickets were sold for this year’s tank biathlon, so the 3,000 spectators who got to witness the spectacle first-hand were all handpicked former or currently serving soldiers accompanied by their families, and various VIPs. “Who knows what would happen if we just let anyone in,” an army spokesman said about the decision. No word yet on whether things will change in the future. The whole event will be broadcast on a Russian TV channel, every Saturday, starting mid-September.

if you think these tanks are cool then check out the Gibbs Quadski Price, Pictures And Info article, it’s one sweet ride.