Sharpest Teeth In The World 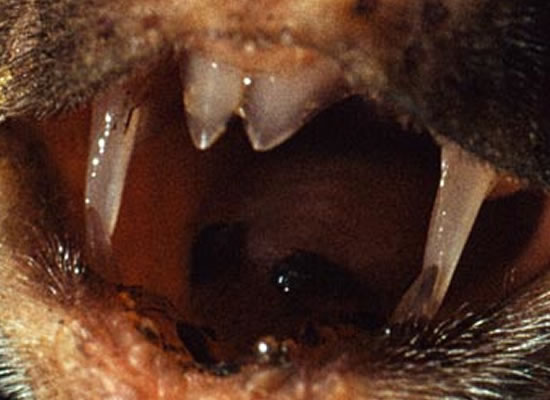 The sharpest teeth in the world.

“ The most common species, the common vampire (Desmodus) is not fastidious and will attack any warm-blooded animal.
The white-winged vampire (Diaemus) appears to have a special preference for birds and goats. In the laboratory it has not been possible to feed Diaemus on cattle blood. ”

If there is fur on the skin of the host, the common vampire bat uses its canine and cheek teeth like a barber’s blades to shave away the hairs.
The bat’s razor-sharp upper incisor teeth then make a 7mm long and 8mm deep cut. The upper incisors lack enamel, which keeps them permanently razor sharp.

The bat’s saliva, left in the victim’s resulting bite wound, has a key function in feeding from the wound.
The saliva contains several compounds that prolong bleeding, such as anticoagulants that inhibit blood clotting and compounds that prevent the constriction of blood vessels near the wound. 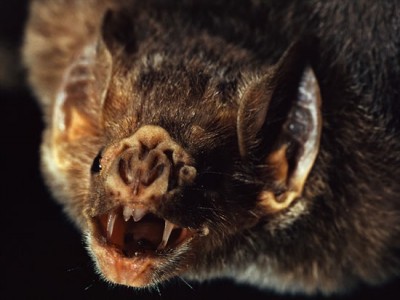 A typical female vampire bat weighs 40 grams and can consume over 20 grams (1 fluid ounce) of blood in a 20-minute feed.
This feeding behaviour is facilitated by its anatomy and physiology for rapid processing and digestion of the blood to enable the animal to take flight soon after the feeding. 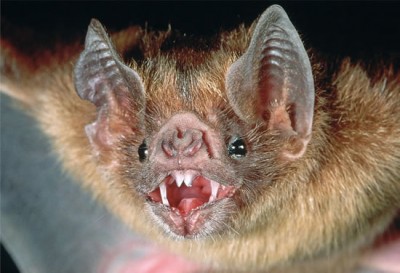 The stomach lining rapidly absorbs the blood plasma, which is quickly transported to the kidneys from where it passes to the bladder for excretion.
A common vampire bat begins to expel urine within two minutes of feeding.
While shedding much of the blood’s liquid makes taking off from the ground easier, the bat still has added almost 20–30% of its body weight in blood.
To take off from the ground, the bat generates extra lift by crouching and flinging itself into the air.
Typically within two hours of setting out, the common vampire bat returns to its roost and settles down to spend the rest of the night digesting its meal.