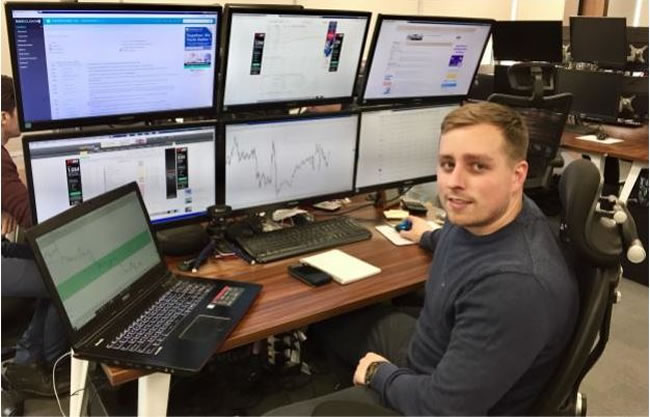 Are you struggling to make the new year feel like a fresh start? It can be difficult for those who are stuck in isolation to stay motivated.

For Samuel Leach, staying busy is not something that he struggles with while under lockdown. Not only is he expanding Samuel & Co Trading, an international CPD accredited company, but he plans to build his followers’ morale heading into 2021.

When the world first went into quarantine last March, Leach used his platforms to encourage intellectual curiosity while at home. He inspired his followers to learn foreign exchange trading with his company, Samuel and Co Trading, since learning new skills helps enhance one’s attractive professional qualities. He enjoys the opportunity to teach aspiring traders via YouTube and beyond about how to transform their passions into something profitable.

Samuel & Co Trading’s Junior Trader Program offers participants at home a unique chance to trade with 20,000 Great British Pounds (GBP). Learning the FX markets without worrying about start-up costs is a unique advantage that Leach offers to his students. It removes a critical barrier of entry that deters those interested in the markets from indulging their intrigue.

During the first lockdown, Leach also hosted weekly, live trading lessons on YouTube with some of his staff. International quarantine orders created the infrastructure to reach more prospective traders than ever before. He also made sure to record each session so that students who could not attend at the designated time would not miss a beat. Before sessions ended, Leach also made sure that anyone who had a question could receive an answer from either him or his highly experienced staff. That flexibility helps Samuel & Co balance the quality of its advice with widespread accessibility.

Although Leach uses his social media platform to inspire entrepreneurship, he is not out of touch with the world’s suffering. While promoting Samuel & Co’s programming during the first wave of lockdowns, Leach also spread the word about cash giveaways. During the most recent lockdowns, Leach announced that he would continue his Weekly Lockdown Classes on Thursdays. He also plans to reintroduce Instagram cash giveaways.

Leach has reached incredible heights as a young, talented trader but hails from humble beginnings. After his parents’ divorce, he shared a single bedroom with his father (a cartographer) and his brother. His family upbringing shaped his relationship with money; he is grateful to have reached financial success and recognizes his unique privileges. Having lived both with and without economic privilege motivates his philanthropy. Leach recently took to Instagram to explain that, over the past year, he “has seen the devastation in the business world of people losing their jobs, becoming unemployed, and struggling to pay bills.” That empathy for those hit hardest by the pandemic motivated him to do more because he has the resources to contribute much-needed help. Said Leach, “as a wealthy individual, it’s the right thing to do.”

In addition to cash giveaways, Leach gives back by “paying for 50 people’s Netflix memberships,” a small gesture “to keep them entertained during the lockdown.” To help frontline workers make ends meet while risking their lives, Samuel is also working with essential personnel to pay bills or reward them with prizes. He vows to continue his COVID-related philanthropy.

Samuel Leach is a popular forex stock trader and social media influencer based in the United Kingdom. A graduate of the University of Hertfordshire and Dean’s Award recipient, Leach worked at one of the U.K.’s leading independent private banks following graduation. After working in banking, he founded Samuel & Co Trading in 2012. Samuel & Co Trading offers a diverse set of forex and stock traders courses at all levels of experience. His programs include the YouTube series “The Real Forex Trader,” which documents 18 aspiring traders as they navigate intellectual and physical challenges related to the world of trading.

Leach’s unique approach to teaching the forex and stock markets’ ins and outs has earned critical acclaim. In 2020, Yahoo Finance included him on its list of top traders to follow. He also ranked seventh in the Fintech Disruptor Awards that same year. Buy Samuel’s book “The Formula for Success” on Amazon