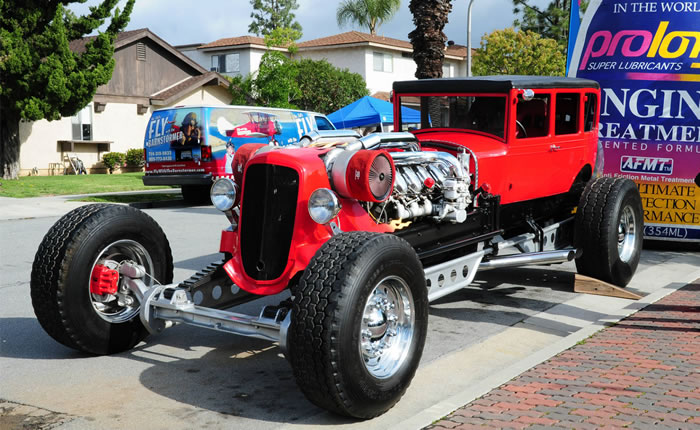 Rodzilla is a crazy but awesome monster hot rod street rod racer. It started off as a vintage 1928 Studebaker and was fitted with a turbocharged 29 liter engine from a Patton tank. It produces a whopping 1400 horsepower and is the meanest hot rod street rod we have ever seen.

The engine alone weighs about a ton, so serious a strong chassis was needed to take all the power. The creators of this monster hot rod street rod claim it can do the quarter mile in 11 seconds. 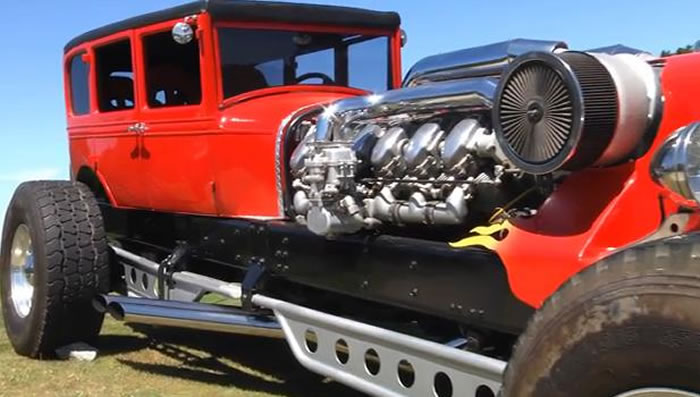 Built by the Blastolene Brothers (who also made the Tank Car) in 2004, the Rodzilla is a massive car which stands over 7 feet tall. The Rodzilla is named after its owner, Rodney Rucker and the famous giant reptile, Godzilla.

Watch the video below with an interview with the creator of this monster hot rod street rod.

There is still a vibrant hot rod culture worldwide, especially in Canada, the United States, the United Kingdom, Australia and Sweden.

The hot rod community has now been subdivided into two main groups: street rodders and hot rodders. Hot rodders build their cars using a lot of original equipment parts, whether from wrecking yards or NOS , and follow the styles that were popular from the 1940s through the 1960s. Street rodders build cars (or have them built for them) using primarily new parts.

A common factor among current owners of hot rods is to make them more noticeable.

There are now many different sectors of hot rodding, some of which are:
Street rod:
A very popular branch of hot rodding. Contrary to the implications of the term hot rod, street rods are a mix of hot rods, custom cars, and modern Detroit cars. Emphasis is on high-quality custom paint jobs, comfortable interiors, and modern engines and running gear. As specified by the NSRA (National Street Rod Association), a street rod must be based on any automobile design manufactured prior to 1949. For later vintage vehicles used as a basis for a similar project car, the term street machine is often used.

Pro-Street rod:
A branch of street rodding featuring mildly customized sedan and coupe models not normally associated with hot rodding that have monster engines and huge rear tires inside the fender wells. They retain all the other luxury features of street rods.

Traditional rod:
Built according to a particular point in time and stick to those build techniques and materials.

Rat rod:
Constructed to resemble an old time jalopy, although they often require as much work and expense as a show rod.

Show rods
Created to compete in national car shows such as America’s Most Beautiful Roadster (AMBR), and the Detroit Autorama.

Collectively they are all referred to as Hot Rods.