Take Your Pet Fish For A Walk With The Aquatic Pram 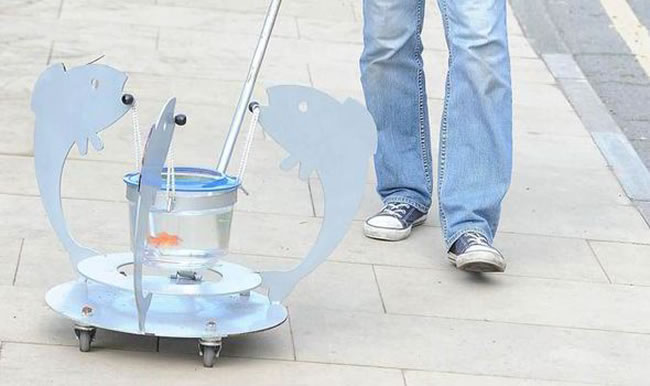 Ever wanted to take your pet fish for a walk, well now here’s your chance.

Seven years ago, when Mike Warren-Madden worried that his pet fish Malcolm was getting bored, he decided to do something about it. He spent weeks at the drawing board, designing a unique device – an Aquatic Perambulator – that would allow him to take his pet fish for a walk. The pram helped Malcolm live a more exciting life; he was probably the most adventurous fish to ever live in a bowl. Sadly, Malcolm is now dead, but the pram still works.

The Aquatic Pram is about four foot tall and made from laser-cut mild steel. Mike, a former sheet metal worker, has spent the better part of the past seven years tinkering with the pram, trying to make it better. With the initial design, he didn’t take the weight of the water into account. So he’s modified it over the years. “I’ve added better elastic to take the shock out of the water and I hope to get better wheels,” he said.

“Because of my background as a sheet metal worker I have been able to build this at little cost – but for someone else it would cost hundreds to make,” Mike pointed out. “I think I’d like someone to come forward and help me motorize it perhaps with a remote control.” He also hopes that an entrepreneur will come forward to invest in the Aquatic Perambulator. 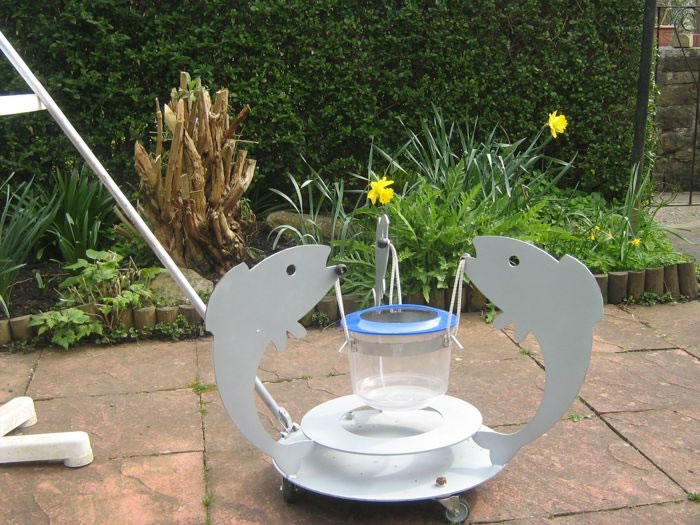 The 60-year-old from West Yorkshire said that he often took Malcolm on walks around town and trips to the pub. “We had some right looks around town, we stopped traffic, but everyone had got into it now. It’s not every day you see someone taking a fish for a walk,” said Mike. “If a fish is in a bowl on a shelf swimming in circles it must get bored. I decided it would be fun to take it out with me down the pub.” Perhaps the active lifestyle really did help, because the pet fish lived until the grand old age of 12. “Malcolm lived to almost 12 years old, I think he was getting something out of it,” said Mike.

If you’re thinking the pet fish probably had no idea he was being walked, Mike has only one question for you: “How do you know?”