It is the original Mini Cooper’s 50th anniversary this year and as a tribute we are dedicating this article to the iconic little car.

My first car was a Mini Clubman and I have many fun memories of that car, it was fun to drive and surprisingly spacious inside.

I also went on to work in the BMW factory at Oxford, Cowley and was there for the first five years of the production of the new BMW owned and redesigned Mini.

The Mini started its life in 1959, it was a revolutionary two door compact car that quickly became a sixties icon. Morris and Austin teamed up to make this little economical car due to the fuel shortage crisis at the time. 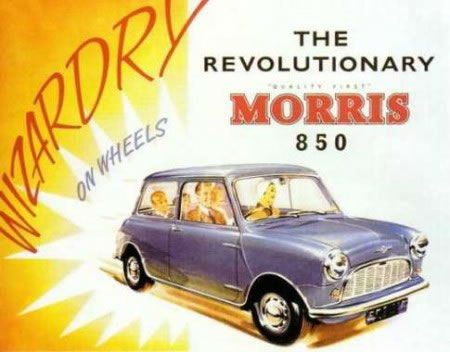 This small car did not receive the name Mini until later in its life, it was originally called the Austin 850 and Morris 850 in North America and France. In Denmark it was known as the Austin Partner (until 1964) and Morris Mascot (until 1981). In the U.K. and Australia it was called the Morris Mini Minor and the Austin Seven. After 1961 the car’s name was finally changed to Morris Mini and Austin Mini. 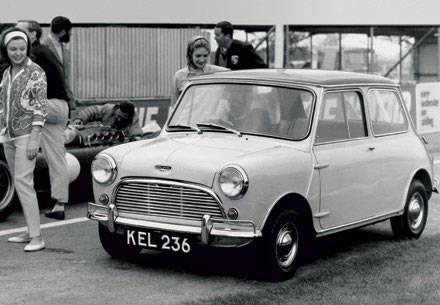 John Cooper, owner of the Cooper Car Company, designer and builder of Formula One and rally cars, could see the potential in the Mini car and teamed up with Sir Alec Issigonis and together they created the first Mini Cooper in 1961.

The original Mini Coopers were upgraded with front disc breaks, a 997cc engine, double carburettor, and modified camshaft and header. All these enhancements increased the Mini’s bhp to 55 making this car sporty enough to enter the racing world.

In 1963 a more powerful Mini car was released, the Mini Cooper S, this had the added benefit of a 1071 cc engine with a 70.61 mm bore and nitrated steel crankshaft and strengthened bottom end to allow further tuning and larger servo-assisted disc brakes. 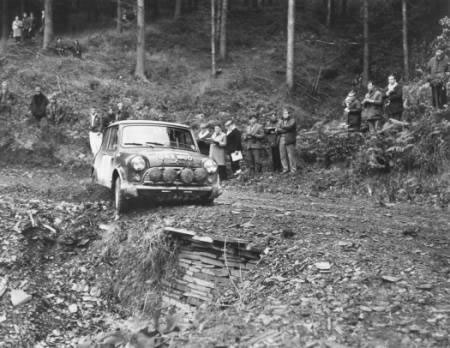 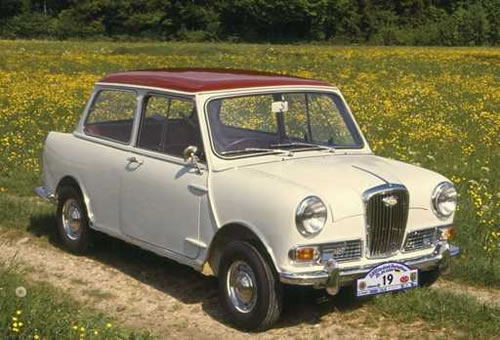 There were many other versions of the Mini added to production such as the Wolseley Hornet and Riley Elf (1961–1969). These two Mini cars were built as a more luxurious version of the Mini, the rear on the these two models were given an extended rear finned boot and also the front had a more distinctive grill. In total there were 30,912 Riley Elfs and 28,455 Wolseley Hornets built 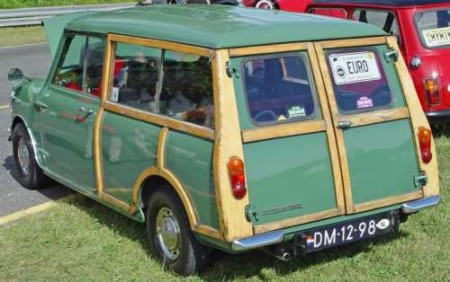 The famous Morris Mini Traveler and Austin Mini Countryman (1961–1969) were other versions introduced and were only available in the U.K. These two models were two-door estate cars with double “barn”-style rear doors. They also had wood trim added to exterior which gave them an American 1950s style. Approximately 108,000 Austin Mini Countrymen and 99,000 Morris Mini Travelers were built. 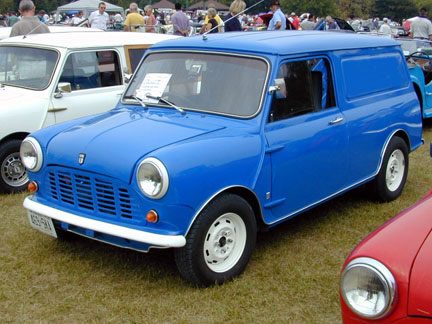 The Mini Van was a popular version and this was built on the same extended chassis as the Mini Traveler and Mini Countryman. In 1978 the name was changed to the Mini 95 after its 0.95 tons weight but the public still continued to call them minivans. There were 521,494 Mini Vans built. 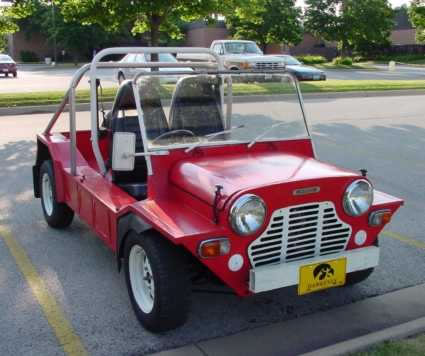 The Mini Moke was around from 1964 to 1968 in the UK, 1966–1982 in Australia and 1983–1989 in Portugal). This was a special 4WD drive version and was originally designed for the British army but was dismissed due to its lack of ground clearance. The Mini Moke went on to feature in the popular 1967 British TV series called The Prisoner and was also used as police cars in countries such Barbados and Macau. About 50,000 Mini Mokes were made. 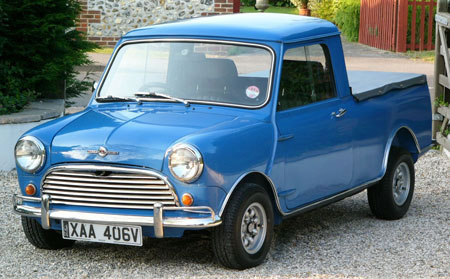 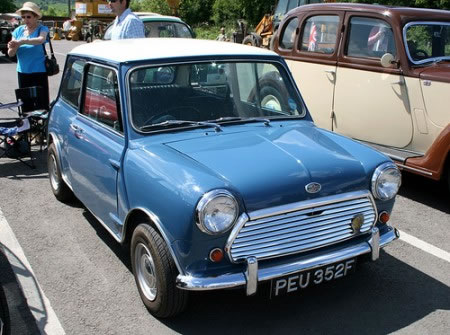 In 1967 the Mini was slightly redesigned and the Mark II was launched. One of the changes was a new chrome grill which stayed with the Mini through the rest of its production years. There was 429,000 Mark II Minis produced.

A couple of years after its release the Mark II Mini became a movie star in the successful 1969 film The Italian Job, which features a gang of thieves escaping in three Mini cars. During the movie these mini coopers took full advantage of their size and drove down staircases, through storm drains, over buildings and finally into the back of a moving bus. 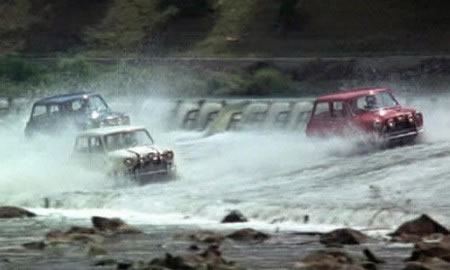 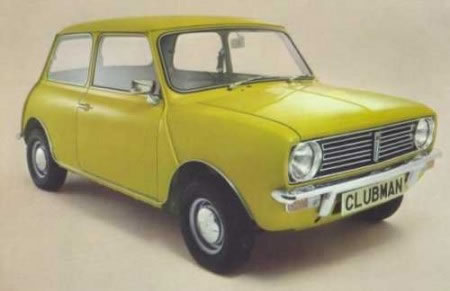 In 1969 a new type of Mini was introduced, the Mini Clubman. This new style had a completely different front end and was designed to replace the Wolseley Hornet and Riley Elf. The Clubman estate also replaced the Morris Mini Traveller and Austin Mini Countryman. Unlike the Mini’s center dashboard display, the instruments were displayed directly in front of the driver. 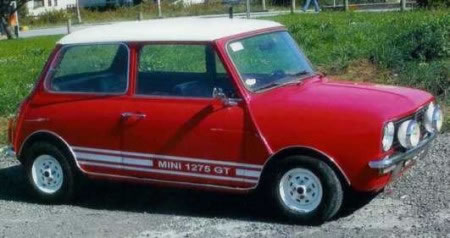 The long-nose Clubman and 1275GT offered better crash safety, were better equipped, and had much better access to the engine, but they were more expensive and aerodynamically inferior to the original 1959 design. The Mini Clubman and 1275GT were replaced in 1980 by the new hatchback Austin Metro. By 1980, 275,583 Clubman saloons, 197,606 Clubman Estates and 110,673 1275GTs had been made.

In 1970 the Mark III Mini was launched which had a modified body shell and the sliding windows were replaced by winding ones. 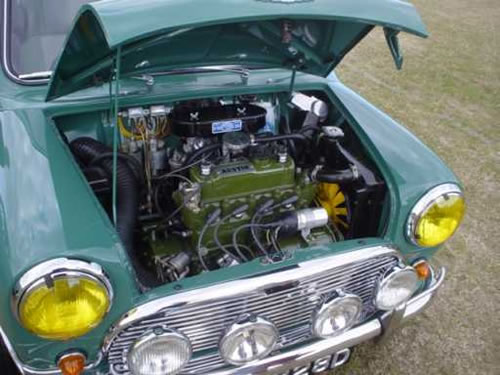 The original Mini Cooper remained popular through the seventies but with other car companies releasing models such as the Ford Fiesta, Volkswagen Polo, and Vauxhall Chevette the Mini was starting to look outdated. Austin released a new car in 1980 to compete with these other car manufacturers, it was called the Austin Metro which was to replace the Mini Clubman.
Demise of the original Mini 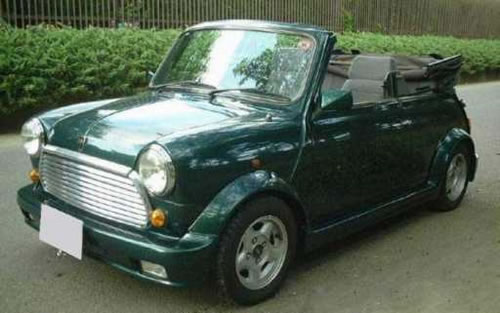 Due to the Metro’s release the Mini’s popularity dwindled and 1981 was the Mini’s last year in the top ten of Britain’s top selling cars. It struggled to reach ninth and the Metro was fifth.

Even though the popularity of the Mini dwindled the little car managed to hag on and stayed in production throughout the eighties. In 1989 the Mini Cooper model was relaunched again which gave it’s popularity a boost up through the nineties. Finally in the year 2000 the last Mini rolled of the production line. 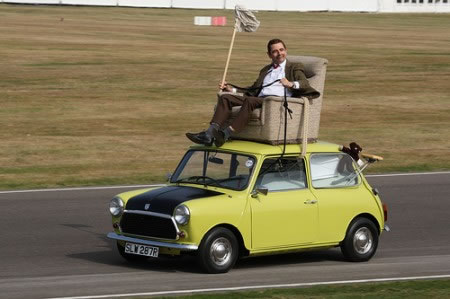 The original Mini Cooper has had a successful TV career and appeared in Movies such as the Italian Job, Bourne Identity, Goodbye Pork Pie and Austin Powers. It was also used in the Popular TV series Mr Bean. 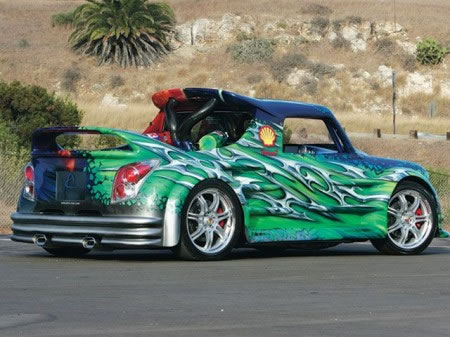 There are many Minis all around the world that have been dramatically altered for certain events and purposes and here are just a few. 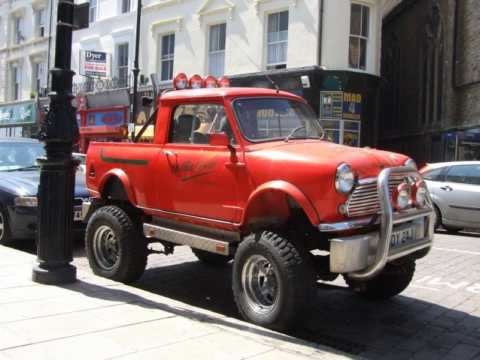 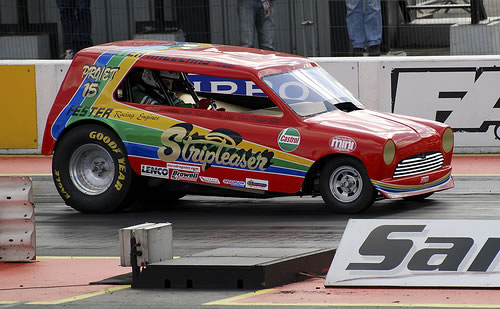 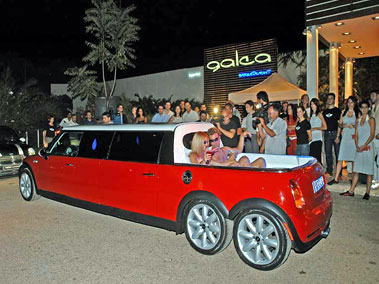 I hope you enjoyed reading.