The Nissan GT-R is an awesome machine, it can lap the famous Nürburgring as fast as any supercar but has the advantage of performing well off road too. Watch this video as modified Godzilla races up a ski slope and hoons around in the snow.

A group from Sweden named Team Iceriders decided to put their tuned up Nissan GT-R to the ultimate test by racing it up a snow covered ski slope. It even races alongside a couple of snow skis whom are no much for the power of the Godzilla.

We’ve seen the GT-R doing its thing in races many times, but seeing it in an off-road environment adds a whole new dimension to it’s performance.

Hopefully the video won’t give GT-R owners any ideas about what to do with their cars when the local track closes for the winter.

Driving straight up a hill is something trucks normally do, but that shows just how versatile the GT-R is. It really is a supercar for all seasons.

With a 3.8-liter twin-turbocharged V-6 and all-wheel drive, the GT-R already has plenty of muscle, but Team Iceriders gave it a little extra to make sure it could scale the slopes.

Nissan has steadily upgraded the GT-R since its 2008 launch, eventually settling with 545 horsepower and 463 pound-feet of torque. However, Nissan is reportedly working on a GT-R NISMO for 2015, with a Bugatti-rivaling 0 to 60 mph time of 2.0 seconds.

According to CarThrottle, this black-and-white GT-R has 620 hp and can devour the quarter mile in 10.77 seconds. Naturally, it wears studded tires when playing in the snow. 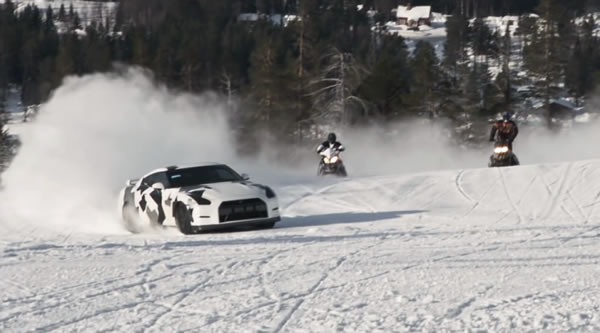 [BONUS – Nissan Plan To Have Autonomous Cars For Sale By 2020]