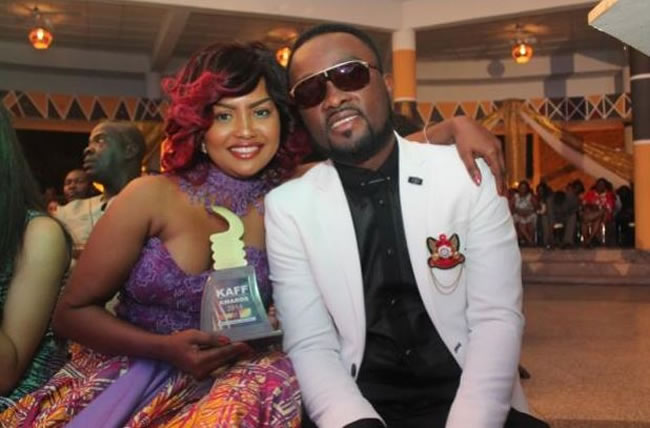 Media reported that Nana Ama McBrown has some issues with her husband Maxwell Mensah, which she denied. The controversy is highly trending in Ghana news now.

Nana Ama Mcbrown also added that she is so blessed that she got Maxwell as a husband. She never mentioned anything negative about her husband to the reporters.

Reporters caught a scene in a party video, where Maxwell was acting less concerned about Nana Ama Mc Brown while she was giving him full attention. Many assumed that they were having issues in their relationship.

When reporters asked Nana Ama regarding this behavior of Maxwell, she clearly said there were no issues between both of them. She also mentioned her husband wasn’t less concerned about the event; he is very reserved and shy guy. That’s why he reacted like that.

Nana Ama McBrown the Kumawood’s star actress refused to admit that she had issues with her husband. She tried to convey one message that Maxwell Mensah is a very good man and he changed her life, she was very happy about the wedding. This has become one of the trending Ghana news now.

In UTV’s ATUU show she said

“My husband has made me fear quiet people because the things he knows marvels me,”

There were some reports that said that Nana Ama forced and made her husband to love her.

A video taken from a party has gone viral and received a lot of attention. People wrote blogs, started gossiping in the comment section of the video on social media platforms.

In the video, Nana Ama was dancing to a song and made happy faces towards her husband. But Maxwell wasn’t that happy in that moment and maintained a very serious and straight face. After the dance session when Nana took rest on her husband’s shoulder, he remained gloomy and unmoved. The reporters assumed that maybe Maxwell and Nana Ama were having trouble in paradise.

The video also depicts some parts where Maxwell was whispering something to her wife. The reporters assumed maybe he was uncomfortable and having some trouble while facing the camera.

The controversy trending on Social media

On social media a lot of individuals were talking about this video, in their eyes Maxwell was not concerned about the event and they assumed maybe he wasn’t ready for the marriage and Nana Ama forced him to do so. While Nana Ama was cheerful about the event, even then her husband wasn’t happy.

Reporters also asked others who were present at the event about the controversy. In their view Maxwell was hardly concerned about her wife in the event.

Nana Ama on the other hand ignored these statements and clearly maintained a positive stand about Maxwell’s character.

Nana Ama always believed that God is the one who tied them in this relationship and she is happy about it. The media and news have questioned about her marriage and husband several times and she said something positive every single time.