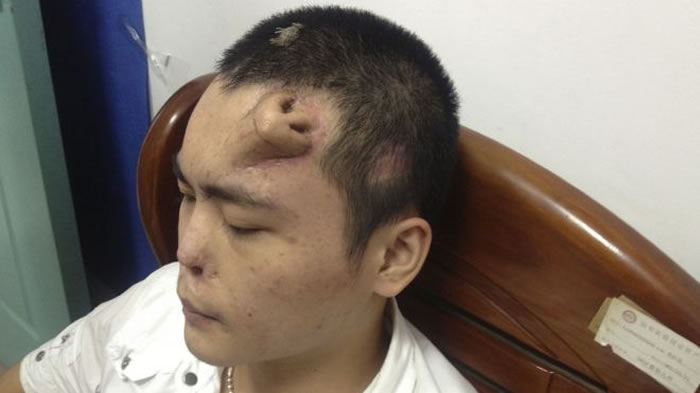 Man Grows Nose On Forehead – You may think this is some special makeup effect but this 22 year old Chinese man actually has a nose growing on his head and this is apparently a pretty common nose reconstruction technique in China.

No too long ago, Xiaolian was involved in a car accident that damaged his nose. After he refused medical treatment, the wound became infected and in a few months time the bacteria had corroded the cartilage of the nose, making it impossible for doctors to save.

But as we’re living in an age where medical miracles are possible, they decided to remove the infected tissue and grow the young man a new nose. This was done by placing a skin tissue expander onto Xiaolian’s forehead, cutting it into the shape of a nose and planting a cartilage taken from his ribs. 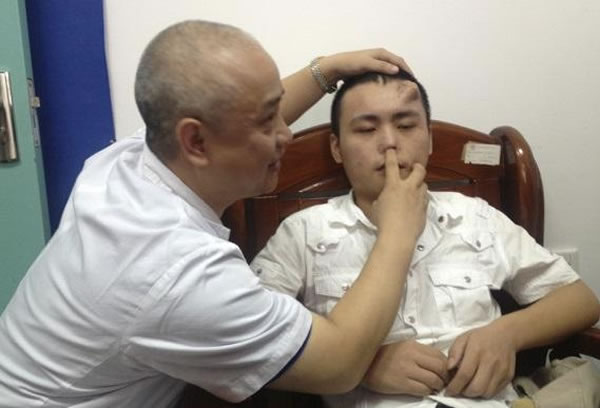 It’s taken Chinese doctors in Fuzhou, Fujian province, nine months to grow the nose, but it was worth it, because the organ developed perfectly and it’s almost ready to be shifted in the place of Xiaolian’s original nose.

As unbelievable as it looks, western plastic surgeons say the technique is nothing new. In fact, 15 years ago scientists in America created a human ear from cow cartilage and attached it to a mouse to see if it would grow. But similar reconstructive surgery is done differently in the Western world.

Doctors also put tissue expanders under the forehead skin to stretch the skin enough to cover the new nose, but they place the cartilage right where the old nose used to be and bring the skin flap over it. Growing the entire nose on Xiaolian’s forehead means it can be moved blood vessels and skin intact, maximizing the transplant’s chances of success.