Largest Hydropower Plant In The World Will Light Up Africa 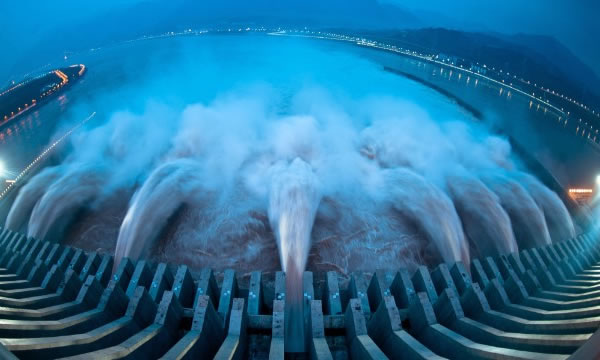 The largest hydropower plant in the world will light up Africa.

It is being hailed as the holy grail for power, the biggest hydroelectric project ever built that would harness sub-Saharan Africa’s greatest river and light up half of the continent.

But will the ambitious plan to tame the mighty Congo River, a mega-project first conceived in the 1970s, finally get going and what will be its actual impact?

Last month, the government of the Democratic Republic of Congo announced in Paris that the construction of the first phase of a new set of energy projects at the country’s Inga Falls would begin in October 2015. The new $12 billion development, dubbed Inga 3, is expected to have a power output of nearly 4,800 megawatts (MW), with South Africa agreeing to buy half of the electricity generated.

But the DRC government’s bold vision ultimately involves five further stages that would complete the “Grand Inga” mega-project, giving it an astonishing capacity of 40,000 MW — that’s twice as much as the Three Gorges dam in China, currently the world’s largest hydro project.

When completed, Grand Inga could provide more than 500 million people with renewable energy, say its proponents.

“A myth dreamed of for 40 years, Grand Inga is becoming a reality with an action plan spread over several plants which will be added in stages,” the DRC government said in a statement after the Paris meeting.

With a length of 4,700 kilometers, the Congo is Africa’s second biggest river, after the Nile, and the world’s second largest river in terms of flow, after the Amazon. At the Grand Inga site, some 1.5 million cubic feet of water flow steadily through a network of cataracts every second, dropping about 100 meters to form the world’s biggest waterfall by volume.

Yet the power potential from the river’s rapids has largely gone unexploited in a country plagued by violence and corruption for decades — just 11.1% of the DRC’s population has access to electricity, according to the World Bank.

So far, the only two projects built to tap Congo’s potential are two smaller dams — Inga 1, commissioned in 1972, and Inga 2, a decade later. Both of them are almost exclusively used to provide energy for the mining companies in the southern DRC’s copper belt but are currently undergoing extensive rehabilitation as they perform far below capacity.

The DRC government hasn’t yet decided on the developer of Inga 3, but three consortia from China, Spain and Korea/Canada are the frontrunners in the competitive selection process. The financing will come from both public and private sources: the Africa Development Bank, the World Bank, the French Development Agency, the European Investment Bank and the Development Bank of Southern Africa have all been named as potential contributors.

But will the DRC, a country with a risky investor profile, be able to raise enough money to build the mammoth project? Some say that with $12 billion required just for Inga 3 — the entire project has an estimated cost of $80 billion — it’s going to be an extremely tough and complex task to find the huge sums needed.

“It almost defies imagination that this kind of money is going to be available,” says James Leigland, technical adviser to the Private Infrastructure Development Group. He notes that several different players will “have to come to the party with equity,” from multilaterals, commercial and national development banks to the DRC government and the developer of the project.

“It is hard to imagine how all of this is going to fall into place,” says Leigland. “They’ve started, they’ve made a commitment to proceed on the basis that South Africa will take a huge amount of the power, but getting from here to there it’s just a very long road,” he adds.

Indeed, the pledge by energy-hungry South Africa to purchase about half of Inga 3’s future power production is essential for the project to attract finance and get going.

The two countries are currently negotiating a treaty to finalize the details of a power purchasing agreement, including the construction of transmission lines to transfer 2,500 MW of Inga 3’s production to South Africa. The exact routing of the energy corridor is not yet defined, but it is expected to be over land, through different countries in the southern part of the continent.