Kristen Stewart, Justin Bieber and Other Celebs Read Nasty Tweets About Themselves 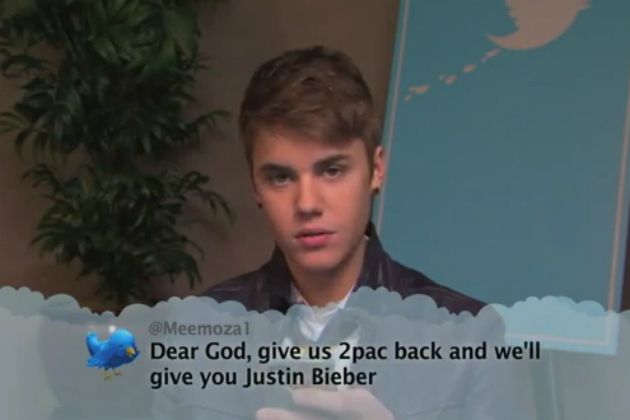 To show how hurtful nasty comments made on twitter can be Jimmy Kimmel invites celebrities to read out offensive tweets about themselves. Numerous celebrities turned up on the Jimmy Kimmel Live show for this event which included Kristen Stewart, Justin Bieber, Larry King and many more.

Katy Perry and Snooki from ‘Jersey Shore’ seem truly perturbed by what Twitter users have to say, while Larry King is both disgusted and amused by the following tweet from @aimeenancygrace: “Did you know that if you skinned Larry King & ironed out his leather, you could make enough coats to give 1 to every poor child in America?”

Kristen Stewart of ‘Twilight’ also makes an appearance. And despite her well-documented difficulties with public speaking, she shows an appreciable amount of good humor while reading a tweet that questions her gender.

But Bieber seems to be the most irked by far. After reading a cruel comment from user @Meemoza1, he shoots an exceedingly dirty look at the camera.