Did You Know Bears Like To Rock Climb? – Here’s Proof 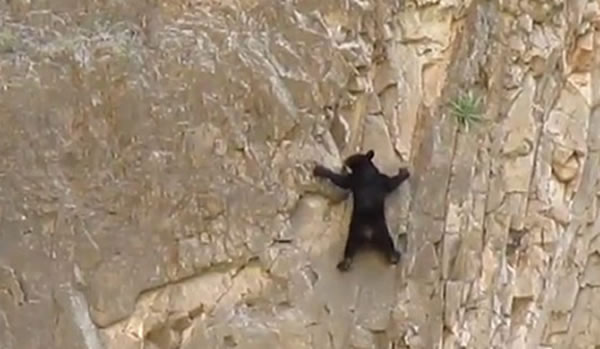 Bears are awesome and here is why, they can rock climb!!

Spotted at Big Bend National Park in Texas, a black bear and its cub were spotted climbing the Santa Elena Canyon wall on 21 March 2014 by a pair of passing kayakers.

[SEE ALSO – 15 Pictures Of Bears Chilling And Thinking About Life]

Here Are Some Other Reasons Why Bears Are Awesome

Bears can stand on their hind feet similar to a human and sit up straight with remarkable balance.

Bears have an incredible sense of smell, even better than most dogs.

The sun bear, an endangered species, is the smallest of the bears at 3.5 to 4.5 feet (1 to 1.5 meter) long. They are named after a crescent shaped marking on their black fur that looks like the rising sun.

While most bears are omnivorous, the polar bear feeds mainly on fish and meat, while the giant panda bear nearly exclusively eats bamboo.

The giant panda has a big appetite spending 12 hours every day eating bamboo.

Brown bear mothers can give birth while they are hibernating. Baby bears are born hairless, toothless and blind.

Some prehistoric cultures revered the animal as the spirit of their ancestors. Modern day bears have a prominent place in many children’s books and as teddy bears.