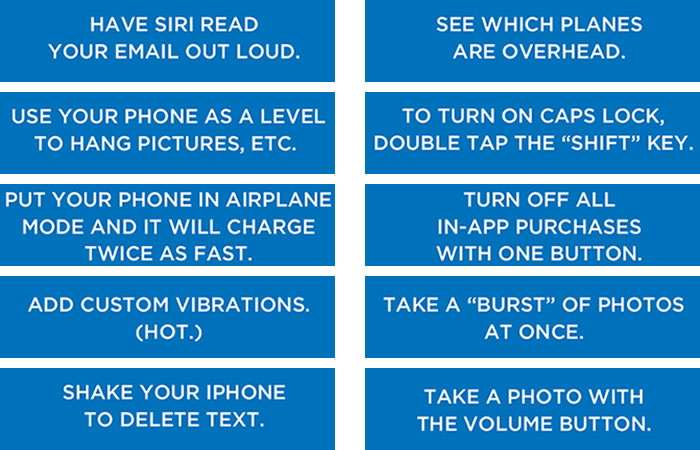 Check out these 10 amazing things you can do with your personal iPhone that you never knew you could if you find more discoveries let us know!

Tell Siri, “Read my email,” and she’ll oblige. You’ll hear the sender’s name, the date/time of the message, and the subject line.
You can also instruct her to “read my latest email” or ask, “Do I have email from [person]?” 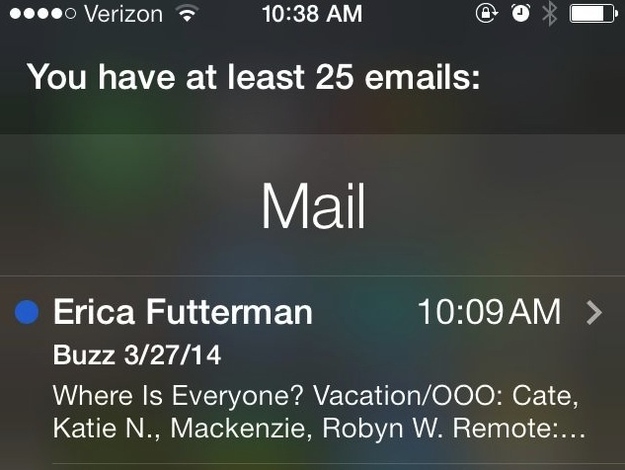 Swipe left in the Compass app to access a level. Pretty cool.

Great for when you need to charge your phone quickly at a bar. 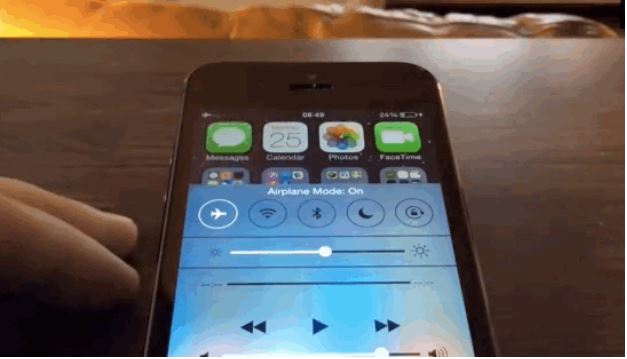 Ask Siri, “What flights are above me?” or just say, “Planes overhead,” and she’ll pull up a chart featuring each plane’s flight number, its altitude, and its angle. (It took my Siri about 30 seconds to pull up this data, so be patient!) 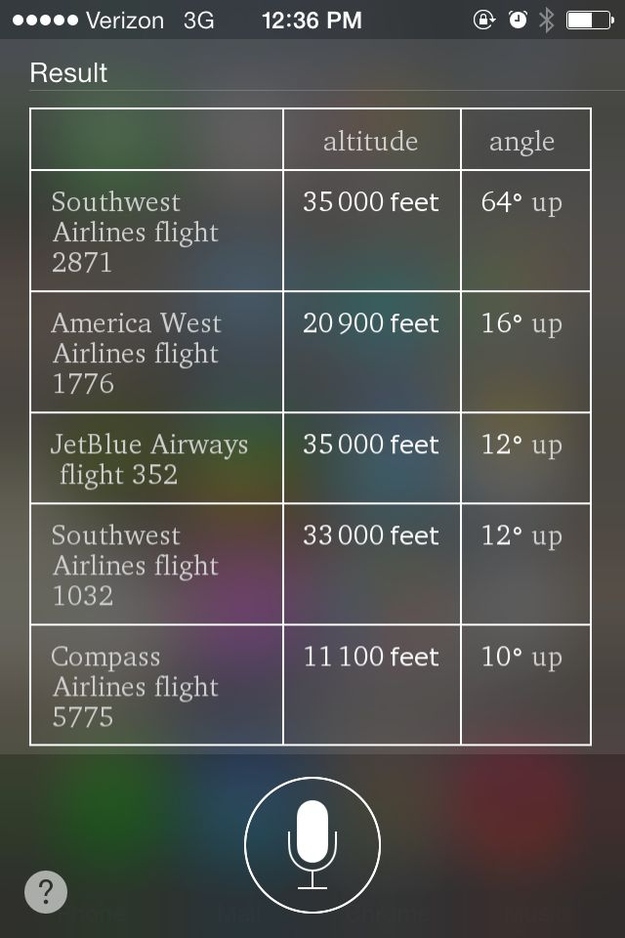 In your Contacts app, you can enable different vibration patterns for different contacts. This is particularly handy if you keep your phone in your pocket, so you can distinguish hands-free between a pesky email from your boss and a fun text. 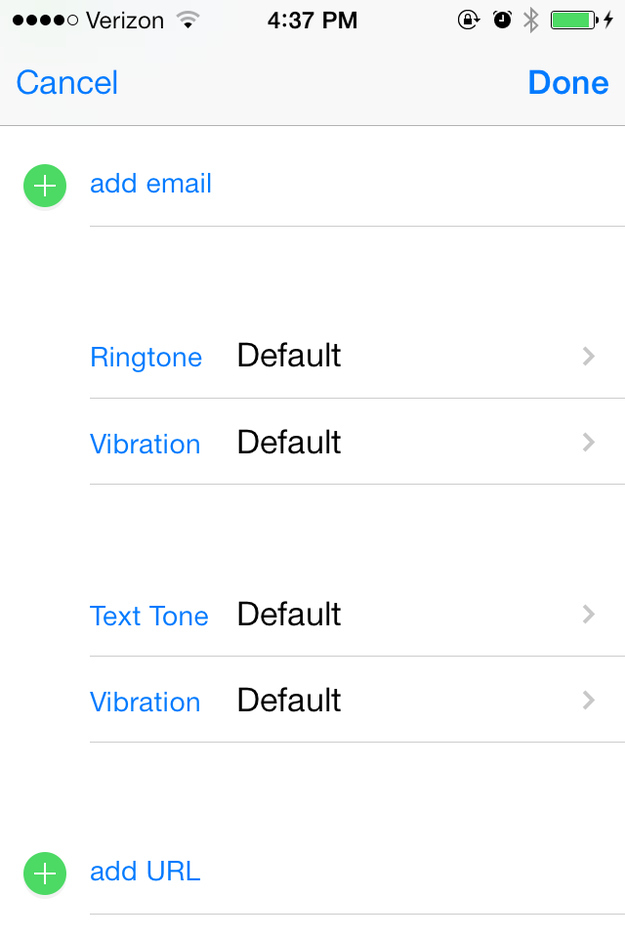 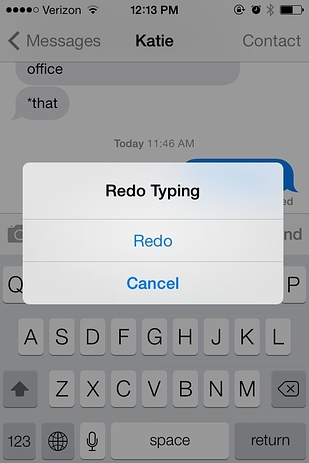 Instead of using the touch circle to snap your selfie, hit the “up” volume button. It lets you hold the phone — and camera — more steadily.

Hold down the shutter button in your camera and you’ll automatically activate burst mode. Your phone will capture a ton of photos in rapid succession and save them to your camera: a great way to guarantee you’ll get a profile pic to your liking. 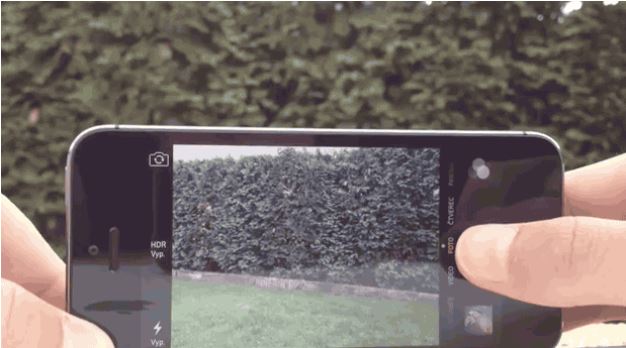 This is especially useful if you have kids, or have zero self-control when it comes to Candy Crush. Go to Settings > General > Restrictions, Enable Restrictions, and scroll down to disable In-App Purchases. 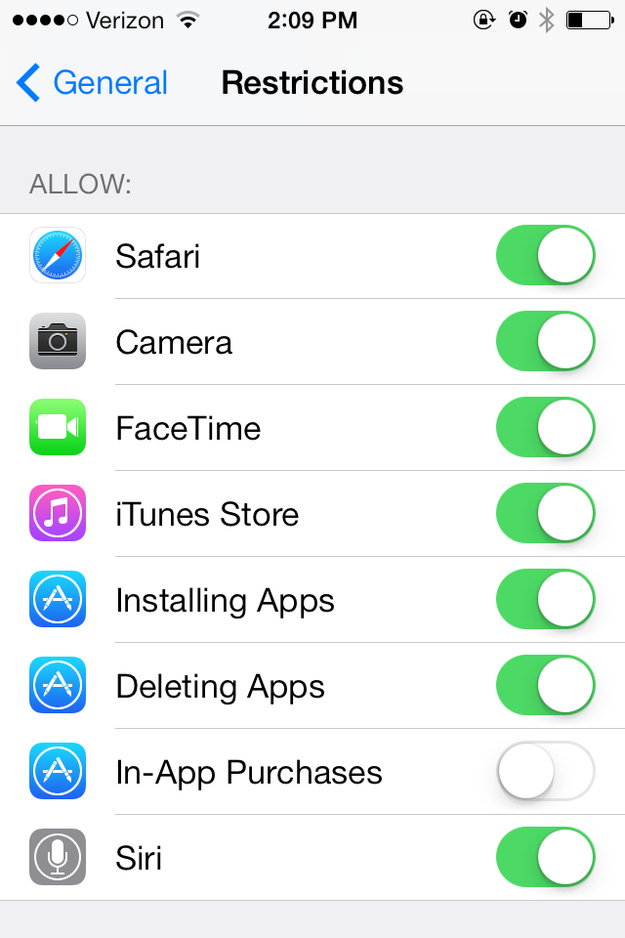 This is so simple to do, yet totally changed my ability to CONVEY HOW EXCITED OR MAD I WAS to my friends without having to hit the shift arrow every time.
NB: If this isn’t working for you, go to Settings>General>Keyboard and make sure Caps Lock is enabled. 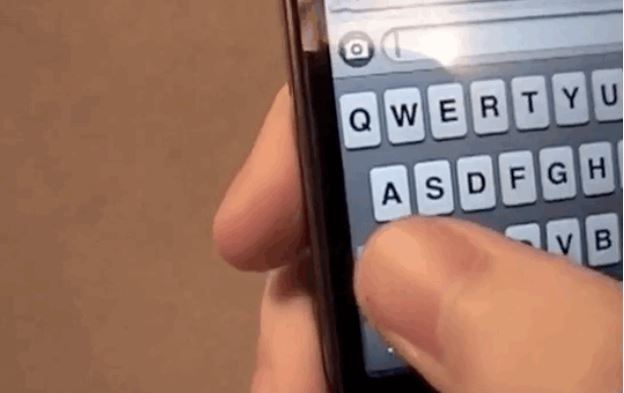 Tell Siri, “Read my email,” and she’ll oblige. You’ll hear the sender’s name, the date/time of the message, and the subject line. You can also instruct her to “read my latest email” or ask, “Do I have email from [person]?”

The iPhone is a line of smartphones designed and marketed by Apple Inc. It runs Apple’s iOS mobile operating system. The first generation iPhone was released on June 29, 2007; the most recent iPhones, the seventh-generation iPhone 5C and iPhone 5S, were introduced on September 10, 2013.

The user interface is built around the device’s multi-touch screen, including a virtual keyboard. The iPhone has Wi-Fi and can connect to many different cellular networks, including 1xRTT and GPRS (shown as a circle on the status bar), EDGE (shown as a capital E on the status bar), UMTS and EV-DO (shown as 3G), a faster version of UMTS and 4G (shown as a 4G symbol on the status bar), and LTE (shown as LTE on the status bar). An iPhone can shoot video (though this was not a standard feature until the iPhone 3GS), take photos, play music, send and receive email, browse the web, send texts, GPS navigation, tell jokes, record notes, do mathematical calculations, and receive visual voicemail. Other functions — video games, reference works, social networking, etc. — can be enabled by downloading application programs (‘apps’); as of October 2013, the App Store offered more than one million apps by Apple and third parties.

There are seven generations of iPhone models, each accompanied by one of the six major releases of iOS. The original 1st-generation iPhone was a GSM phone and established design precedents, such as a button placement that has persisted through all models and a screen size maintained for the next four iterations. The iPhone 3G added 3G cellular network capabilities and A-GPS location. The iPhone 3GS added a faster processor and a higher-resolution camera that could record video at 480p. The iPhone 4 featured a higher-resolution 960×640 “Retina Display”, a VGA front-facing camera for video calling and other apps, and a 5-megapixel rear-facing camera with 720p video capture. The iPhone 4S upgrades to an 8-megapixel camera with 1080p video recording, a dual-core A5 processor, and a natural language voice control system called Siri. iPhone 5 features the dual-core A6 processor, increases the size of the Retina display to 4 inches, and replaces the 30-pin connector with an all-digital Lightning connector. The iPhone 5S features the dual-core 64-bit A7 processor, an updated camera with a larger aperture and dual-LED flash, and the Touch ID fingerprint scanner, integrated into the home button. iPhone 5C features the same A6 chip as the iPhone 5, along with a new backside-illuminated FaceTime camera and a new casing made of polycarbonate. As of 2013, the iPhone 3GS had the longest production run, 1181 days; followed by the iPhone 4, produced for 1174 days.

The resounding sales of the iPhone have been credited with reshaping the smartphone industry and helping make Apple one of the world’s most valuable publicly traded companies in 2011–12. The iPhone is the top-selling phone of any kind in some countries, including the United States and Japan.