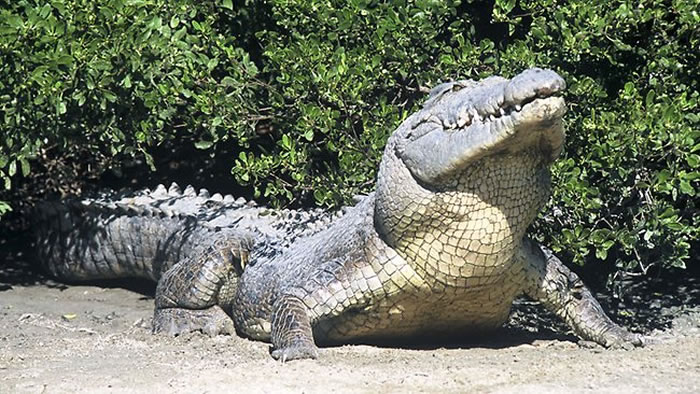 A huge crocodile trapped a man on an island in a remote part of Australia for two weeks as he feared he would be eaten if he tried to escape!

The tourist, named only as a New Zealander called Ryan, had been taken to Governor Island by boat and had been intending to kayak the 4km (2.5 miles) back to the mainland.

But he told his rescuers that every time he tried to paddle away from the island, off Western Australia, the giant reptile – said to be about 6m (20ft) long – stalked him and looked as if it was likely to attack.

So he stayed on dry land where he thought he was safer, despite diminishing food and water supplies.

Two weeks later, Ryan was finally rescued by Don Macleod, who went to the island after he spotted a light and feared it may be someone who needed help.

When he arrived on Saturday, Mr Macleod came across Ryan, who was very distressed.

Mr Macleod said: “He said he was there for a fortnight and he came to the conclusion very quickly that he couldn’t get off there without attracting this crocodile that lives in that area and probably was watching him all the time.

“So he was reduced then to trying to conserve his water and signal (for help),” he told the Australian Broadcasting Corporation.

“I went across and Ryan came out looking a bit distraught. He came down the beach, he had no hat on and no shirt on.

“He was relieved and shocked, and thankful someone had come along because he was running out of options pretty quickly. He is a very, very lucky man.”

“He was desperate for water when I trotted up.

“We gave him a cold beer, which was probably the wrong thing, and then he went to sleep about three-quarters of the way home.”

Ryan is reportedly recovering on the mainland.

Mr Macleod said he was familiar with the crocodile which roams the island, which has no freshwater source.

He said the reptile in question is around 6m long and has had several run-ins with people using the waters nearby.

“One day he just happened to surface alongside me as I was going past and my boat’s 20ft long so he was well up towards the 20ft mark.”

Saltwater crocodiles, which can grow up to 7m long and weigh more than a tonne, are a common feature of Australia’s tropical north.

Last month a man was snatched by a large crocodile in front of horrified onlookers as he swam in a river in the Northern Territory.