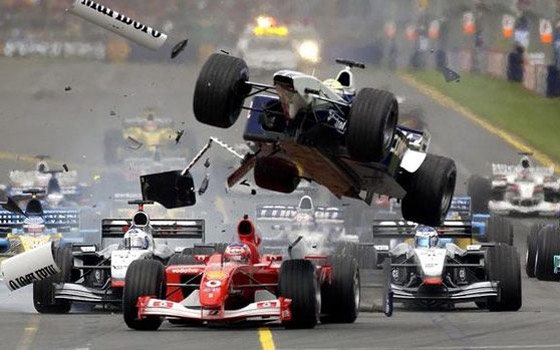 Did you know that most of the safety technology in your car was first developed for motor racing? Car companies invest huge amounts of money in motor sports safety technology and quite often, if successful they later implement the same tech to their road going cars.

Watching NASCAR or Formula 1 it is hard to see how the lessons learned at nearly 200 mph, high on the banking at Daytona, could somehow make your commute across a congested town, never exceeding 50 mph, a safer experience. However, looking closely, almost every facet of the modern automobile has been shaped by motor racing, including many things which make everyday journeys safer:

Horse power is probably the single most important element in winning races, but it also makes our road cars much safer – good power, and correspondingly good acceleration allows a minivan full of kids and shopping to swiftly get up to speed and merge safely amongst the big rigs on a crowded freeway.

Tires are key to making sure a car can turn and stop effectively. Racing has been hugely influential in the development of better tires. Fifty years ago, road cars had bias-ply tires, which in comparison to modern radial tires offered a poor level of control, since they tended to follow the contours of the road surface (“tramlining”). Racing teams realized that broader tires allowed higher cornering speeds, and in the early 1960s tires became far wider. Road cars followed the trend, and simply by having a greater contact patch – literally, “more rubber on the road” – the stopping and turning abilities of road cars are far better than they were even thirty years ago.

Like tires, the chemical composition of brake lining materials have evolved enormously, literally driven by the heat of competition. Better brakes mean shorter stopping distances, which helps lap times on the race track, but in road use allows drivers to avoid accidents by stopping short of obstacles instead of crashing into them. One of the most famous instances of the “trickle down” of technologies from the race track to the road concerns Jaguar’s development of the disc brake, specifically for the Le Mans 24 hour race, in the early fifties. Not only were they more effective than the traditional drum brakes but they eliminated the brake “fade” found with drums, where after heavy use the brakes would become less and less effective, eventually failing altogether.

During the early nineties Formula 1 began utilizing a raft of “electronic driver aids”, such as traction control systems, anti-lock brakes and stability control systems. Certain of these systems are now mandated on road cars, for example stability control systems in SUVs in order to prevent roll-over accidents. If the car is moving at 30mph, but the wheels aren’t turning, the computer knows the car is in a skid, and responds by removing and re-applying the brakes many times per second. This shortens the stopping distance – great for accident avoidance – but also gives the driver the chance to steer around the obstacle while still braking – something not possible while the car is skidding. Stability control programs brake and accelerate individual wheels to reduce the lean angle of SUVs and prevent them from over-turning.

In many ways the qualities that make winning racing cars also make for safe road cars, and that is probably why there has been such significant safety technology transfer from racing to the road cars you and I drive every day.