To celebrate the movie Gravity’s success at the oscars NASA has released high quality photos taken from space. The album was uploaded to NASA Goddard Space Flight Center’s Flickr page, which consistently provides some of the most awe-inspiring images you will ever see. 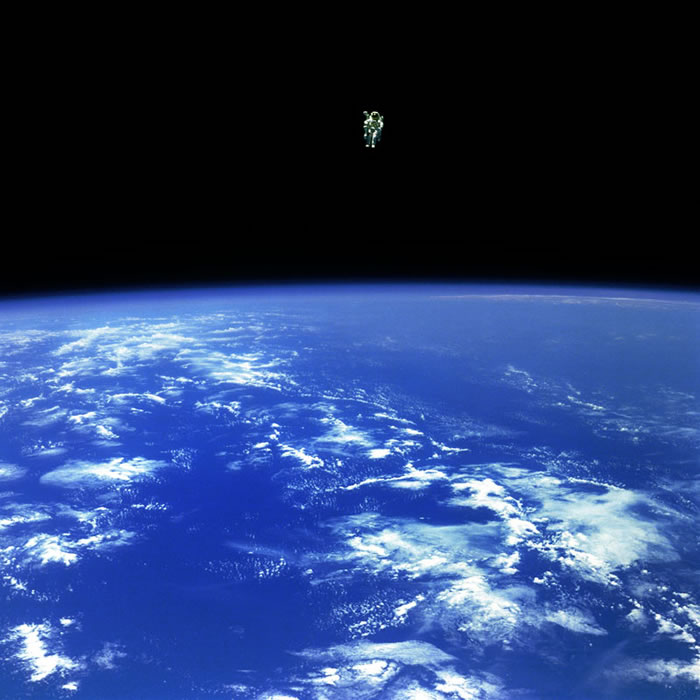 Mission Specialist Bruce McCandless II, is seen further away from the confines and safety of his ship than any previous astronaut has ever been. This space first was made possible by the Manned Manuevering Unit or MMU, a nitrogen jet propelled backpack. After a series of test maneuvers inside and above Challenger’s payload bay, McCandless went “free-flying” to a distance of 320 feet away from the Orbiter. This stunning orbital panorama view shows McCandless out there amongst the black and blue of Earth and space. (02/12/1984) 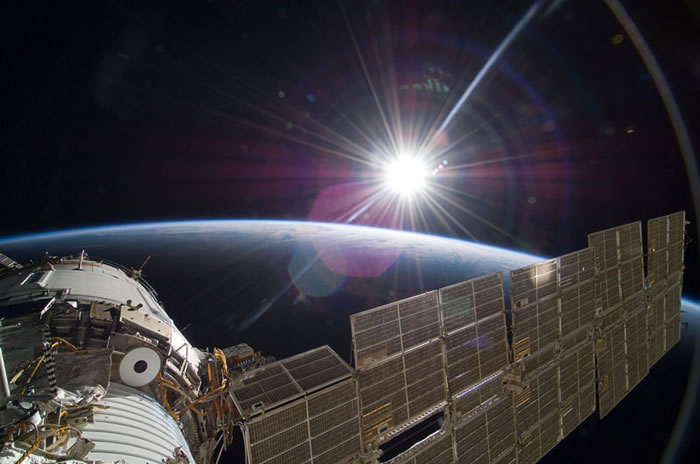 The bright sun greets the International Space Station in this Nov. 22 scene from the Russian section of the orbital outpost, photographed by one of the STS-129 crew members. 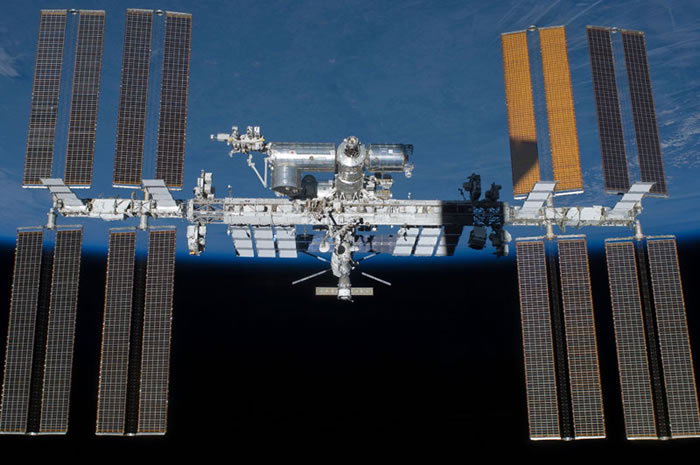 Backdropped by Earth’s horizon and the blackness of space, the International Space Station is featured in this image photographed by an STS-134 crew member on the space shuttle Endeavour after the station and shuttle began their post-undocking relative separation. Undocking of the two spacecraft occurred at 11:55 p.m. (EDT) on May 29, 2011. Endeavour spent 11 days, 17 hours and 41 minutes attached to the orbiting laboratory. 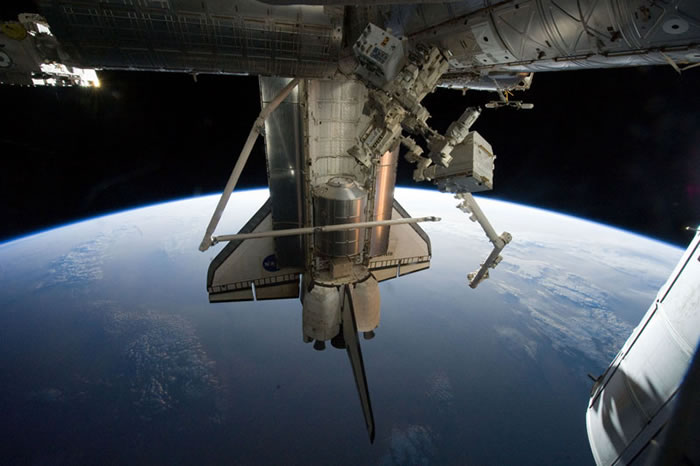 Silhouetted against the Earth, Atlantis flies into the rising Sun in this photograph taken by an astronaut on the International Space Station on July 19, 2011. On July 20, the shuttle undocked from the station for the final time and began preparations to return home. During their 13 days in space, the shuttle astronauts supplied the International Space Station with a new logistics module, tested tools, technologies, and techniques to refuel satellites in space, and collected old equipment from the space station.

Atlantis is scheduled to land at Kennedy Space Center at 5:56 a.m. local time on July 21, concluding NASA’s 30-year space shuttle program. In addition to the science the shuttle and earlier programs enabled, human space flight has given us a unique view of planet Earth, which includes the now iconic spectacle of Earth rising over the Moon taken during the first lunar landing on July 20, 1969, and the photographs taken from Atlantis during its last full day in space on July 20, 2011. In fact every flight is a mission to planet Earth, as described in the Earth Observatory’s tribute to the shuttle program. 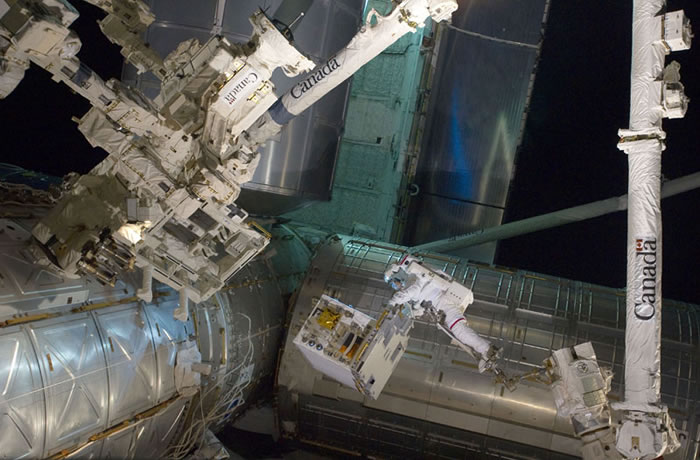 With his feet secured on a restraint on the space station remote manipulator system’s robotic arm or Canadarm2, NASA astronaut Mike Fossum (frame center) holds the Robotics Refueling Mission payload, which was the focus of one of the primary chores accomplished on a six and a half hour spacewalk on July 12. The failed pump module is with DEXTRE on left side of the photo. NASA astronauts Fossum and Ron Garan performed the six-hour, 31-minute spacewalk, which represents the final scheduled extravehicular activity during shuttle missions. 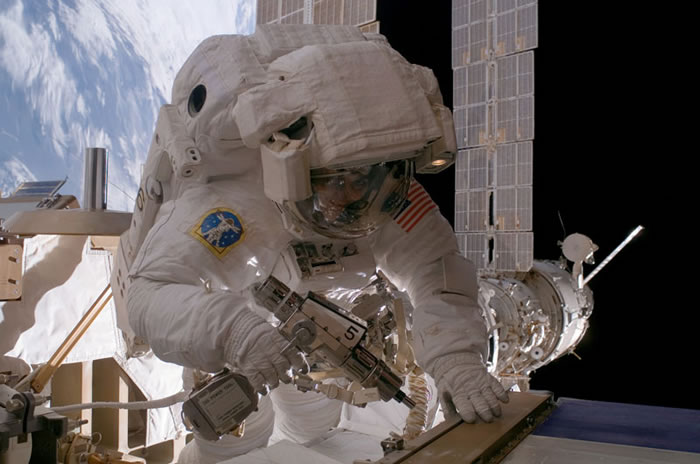 Astronaut Sunita L. Williams, Expedition 14 flight engineer, used a pistol grip tool as she worked on the International Space Station in the first of three spacewalks slated to occur over a nine-day period. During the 7-hour 55-minute spacewalk that took place on Jan. 31, 2007, Williams and station commander Michael E. Lopez-Alegria (out of frame) reconfigured one of two cooling loops for the Destiny laboratory module, rearranged electrical connections and secured the starboard radiator of the P6 truss after retraction. 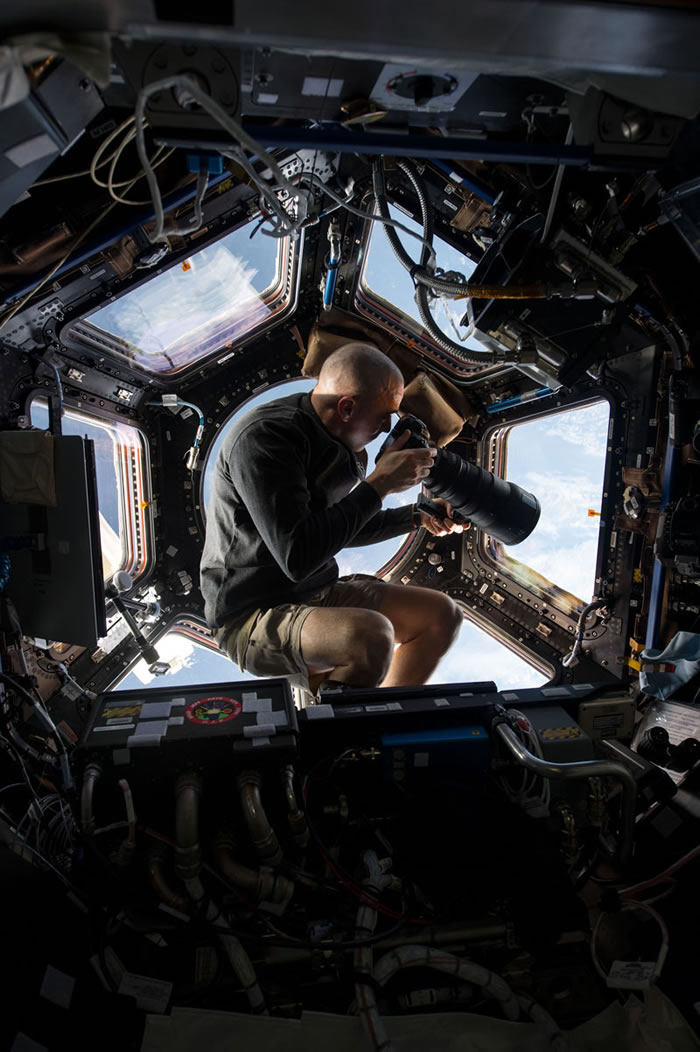 Inside the Cupola, NASA astronaut Chris Cassidy, an Expedition 36 flight engineer, uses a 400mm lens on a digital still camera to photograph a target of opportunity on Earth some 250 miles below him and the International Space Station. Cassidy has been aboard the orbital outpost since late March and will continue his stay into September. 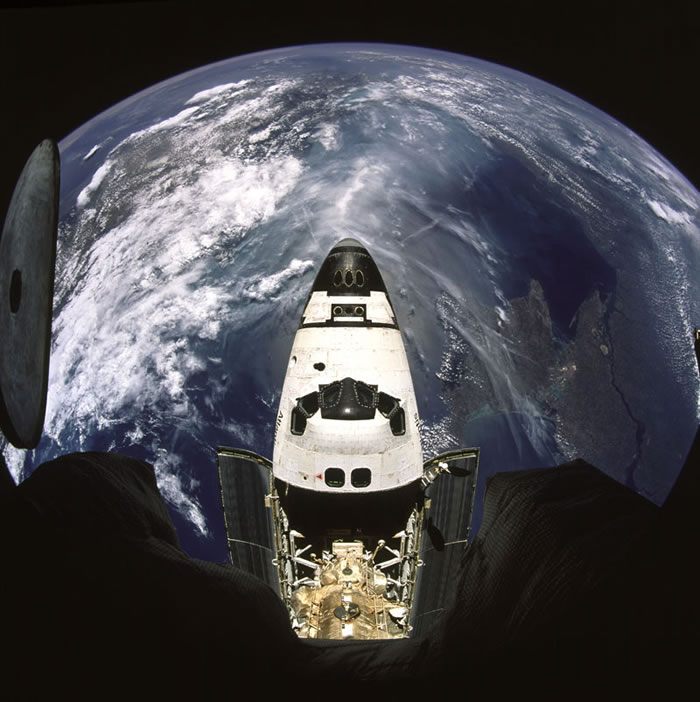 9. Storm Clouds Over the Atlantic Ocean Near Brazil 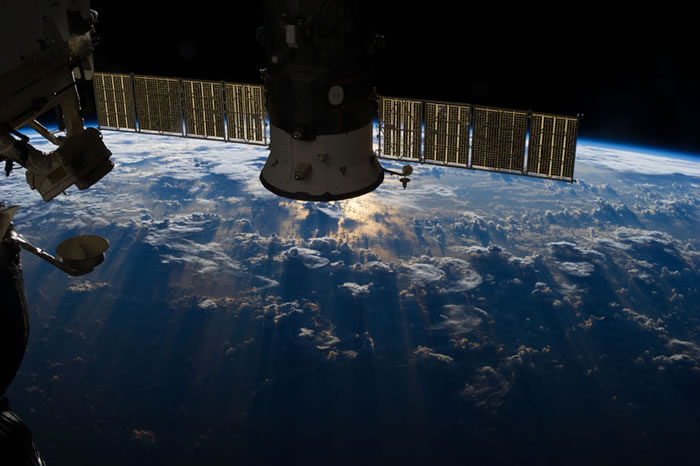 One of the Expedition 36 crew members aboard the International Space Station used a 50mm lens to record this image of a large mass of storm clouds over the Atlantic Ocean near Brazil and the Equator on July 4, 2013. A Russian spacecraft, docked to the orbiting outpost, partially covers a small patch of sunglint on the ocean waters in a break in the clouds. 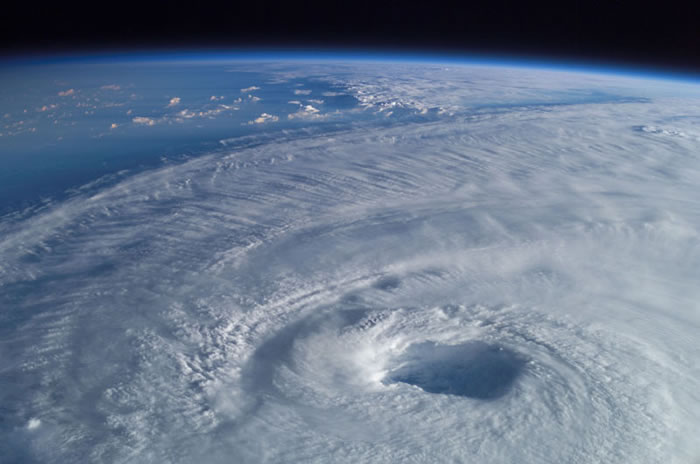 This close-up view of the eye of Hurricane Isabel was taken by one of the Expedition 7 crew members onboard the International Space Station (ISS). “It is quite interesting to look at storms, said Ed Lu, Expedition 7 science officer. “When you see a large cyclone, you can see the spiral structure, and you can actually see – if there is a hurricane – you actually see the eye of the hurricane. You can look right down into it if you are lucky enough to go right over the top.” 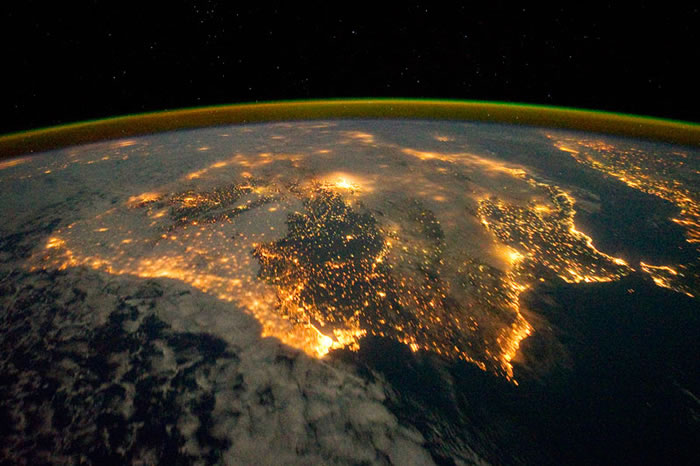 The city lights of Spain and Portugal define the Iberian Peninsula in this photograph from the International Space Station (ISS). Several large metropolitan areas are visible, marked by their relatively large and brightly lit areas, including the capital cities of Madrid, Spain—located near the center of the peninsula’s interior—and Lisbon, Portugal—located along the southwestern coastline. The ancient city of Seville, visible to the north of the Strait of Gibraltar, is one of the largest cities in Spain. The astronaut view is looking toward the east, and is part of a time-lapse series of images.

The network of smaller cities and towns along the coastline and in the interior attest to the extent of the human presence on the Iberian landscape. The blurring of city lights is caused by thin cloud cover (image left and center), while cloud tops are dimly illuminated by moonlight. Though obscured, the lights of France are visible near the horizon line on the upper left, while the lights of northern Africa are more clearly discernible at right. The faint gold and green line of airglow—caused by ultraviolet radiation exciting the gas molecules in the upper atmosphere—parallels the horizon (or Earth limb). 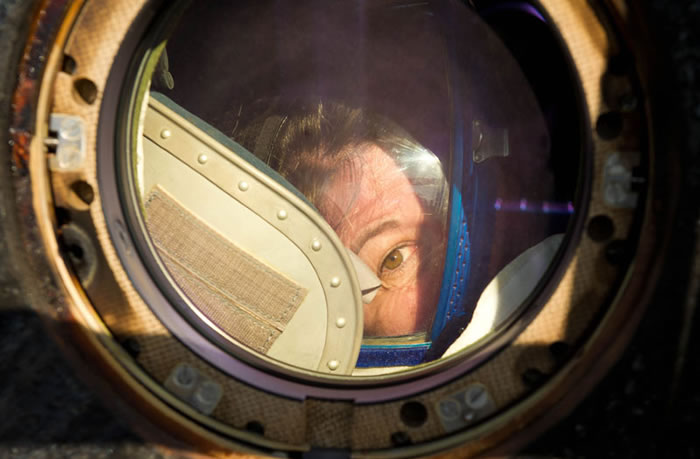 Expedition 27 Flight Engineer Cady Coleman peeks out of a window of the Soyuz TMA-20 spacecraft shortly after she and Commander Dmitry Kondratyev and Flight Engineer Paolo Nespoli landed southeast of the town of Zhezkazgan, Kazakhstan, on Tuesday, May 24, 2011. NASA Astronaut Coleman, Russian Cosmonaut Kondratyev and Italian Astronaut Nespoli are returning from more than five months onboard the International Space Station where they served as members of the Expedition 26 and 27 crews. 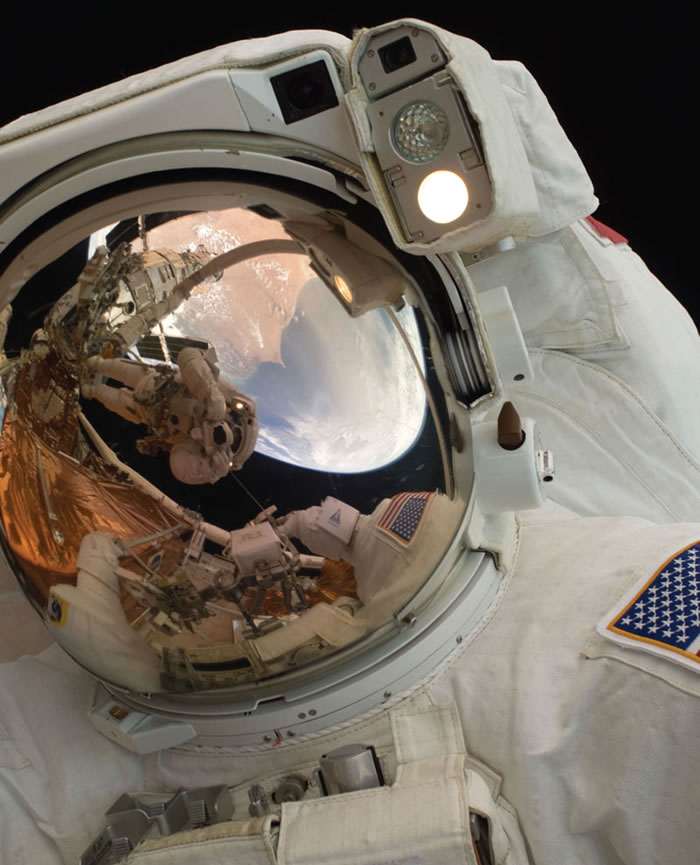 A close-up of Astronaut John Grunsfeld shows the reflection of Astronaut Andrew Feustel, perched on the robotic arm and taking the photo. The pair teamed together on three of the five spacewalks during Servicing Mission 4 in May 2009. 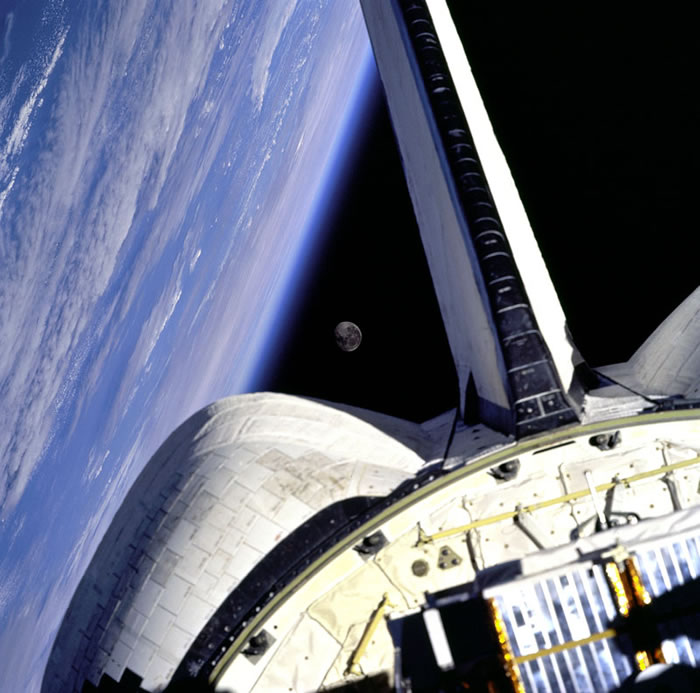 Earth and its Moon are nicely framed in this image taken from the aft windows of the Space Shuttle Discovery in 1998. Discovery – on mission STS-95 – was flying over the Atlantic Ocean at the time this image was taken.

The thin line of Earth’s atmosphere and the setting sun are featured in this image photographed by a crew member on the International Space Station while space shuttle Atlantis (STS-129) remains docked with the station. 11/23/09.

Which of these high quality photos of space do you think is the most awesome?