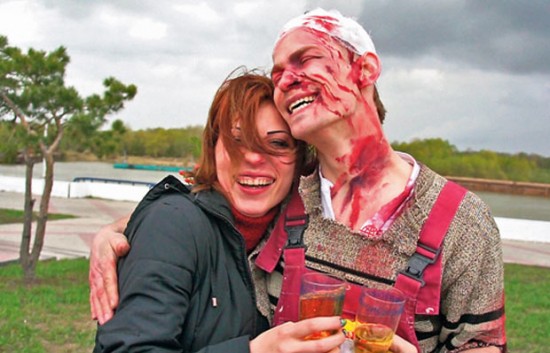 This has to be one of the most sickest wedding proposals ever. A Russian man faked his death in a crazy car crash wedding proposal. The guy hired a film company to stage the fatal car crash to see if his girlfriend really loved him.

While she was in tears with the loss of her loved one the man jumped out and proposed.

Most people already know, or at least think they know the person they want to marry truly loves them, before they pop the big question, but 30-year-old Alexey Bykov, from Omsk, Russia, wanted to make absolutely sure.

Instead of taking the easy route, like making his girlfriend Irina take a lie detector test, he decided to fake his own gruesome death to see what her reaction would be. So the young Russian hired a movie director, stuntmen, make-up artists, and even a script writer to stage a car crash in which he lost his life.

They made sure everything looked as realistic as possible, by using crashed cars, smoke, ambulances and carnage, so the poor girl didn’t for a minute think she was the victim of a very creepy prank.

Once all the details of his plan were discussed with the film crew, Alexey arranged to meat Irina in a certain place, only when she arrived she found mangled cars and her beloved’s body lying on the road all covered in blood. A paramedic told her he was dead and she immediately broke into tears. Once the “romantic” prankster got the reaction he was waiting for, he got up from the pavement and proposed.

You can imagine Irina’s reaction, can’t you? Well, although she admits at first she “almost killed him again, but for real this time”, in the end she accepted to be this crazy man’s wife for the rest of her life.

Asked why he planned such a macabre wedding proposal, Alexey Bykov said: ”I wanted her to realize how empty her life would be without me and how life would have no meaning without me.” Very romantic stuff, I must say. He did promise this was the last time he pulled such a stunt.

Watch the Car Crash Wedding Proposal in the video below.

Would you have accepted such a bizarre wedding proposal?