Ford Mustangs That Never Were But Could Have Been Awesome 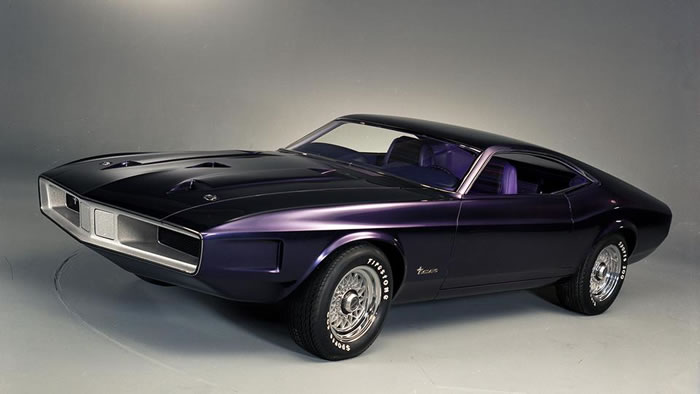 The iconic Ford Mustang was designed by Lee A Iacocca and become America’s favorite pony car. It was a compact, affordable and had enough horsepower to win over hot-rodders while also appealing to families. Over the years there were many Ford Mustangs that never were and if passed, they could have added to the long line up of Ford Mustang awesomeness.

Take a look and see what you think.

Ford’s longest-running model has grown more sporting and class-competitive in ensuing decades, but the process has not been altogether smooth. With the 2015 model expected to bow at the 2014 New York auto show – the setting of the Mustang’s debut 50 years prior – Ford has opened its archives to reveal the ponies that never had a chance to leave the corral. (All photography by Ford Motor) 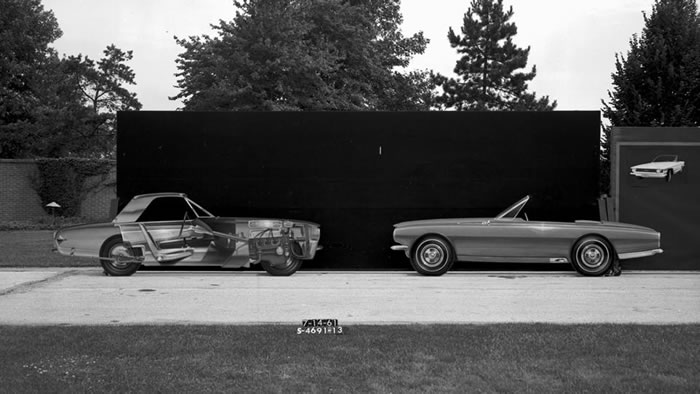 Demonstrating just how fluid the Mustang’s identity was during its gestation, Ford produced two-seater coupe and convertible concepts prompted by the need to fill the sporting niche previously occupied by the Thunderbird, which had gained considerable girth and length since its debut in the mid-‘50s. Over its half-century run, the production Mustang has only been sold as a four-seater vehicle. 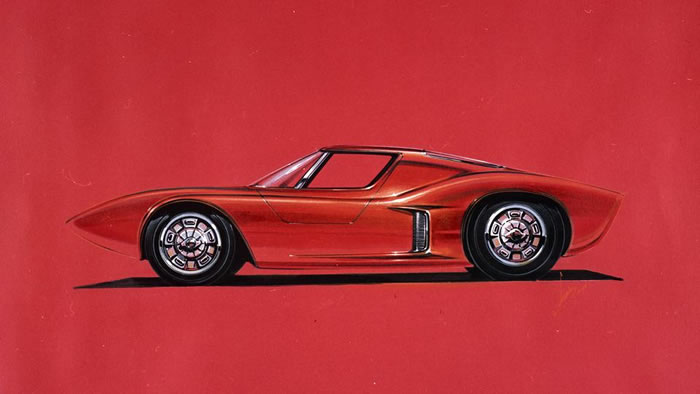 Though never produced, this design study leapfrogs what would become the first-generation Mustang to claim a place beside the 1966 GT40, the most dominant endurance racecar of its era. From its mid-engine layout to its tucked hind quarters to the slope of its roofline, the study already bore the aesthetic cues of a future Le Mans legend. 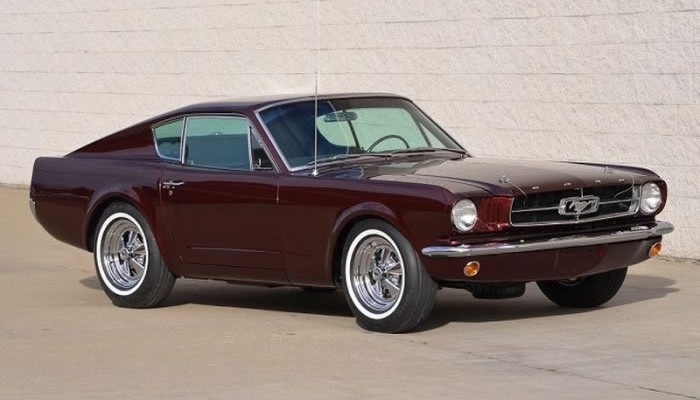 According to Designer Bill Snyder, Ford itself built this experimental two seater Mustang from a pre-production chassis shortened 16 inches and stuffed with a 260-cu.in. V8 engine bored and stroked to 302 cubic inches.

It didn’t get the go ahead but the Ford Mustang two seater concept car is still around today. 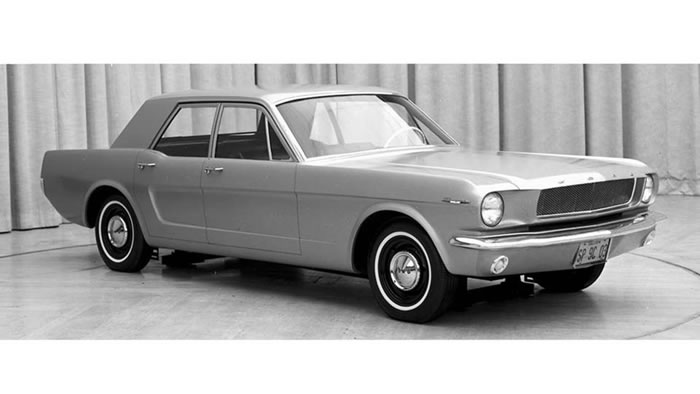 In arguably the first of what would grow to include many styling miscues made in the Mustang’s name, Ford tinkered with the first-gen car’s wheelbase to produce a four-door concept. The extra doors all but sap the magical three-box proportions of the original, producing something as unremarkable as many other four-doors of its day (we’re looking at you, Plymouth Valiant). 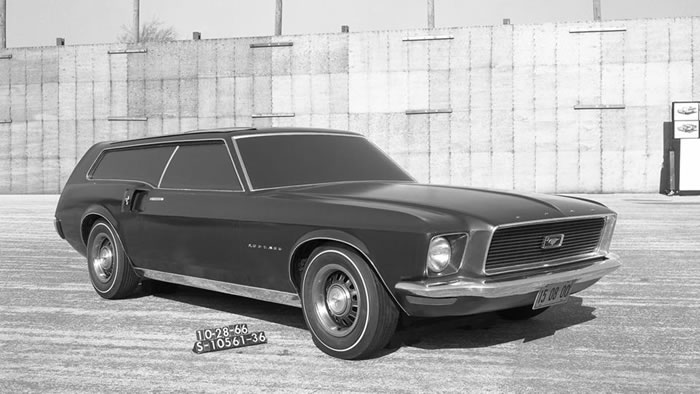 Ford had an unalloyed hit on its hands with the Mustang. Naturally, executives sought to capitalize on the nameplate’s popularity by stretching into new segments. This wagon concept, unlike the four-door sedan of the previous year, pushed the Mustang in a progressive direction by aligning it with so-called shooting brakes leaving design studios in Britain and Sweden. The square-back ‘Stang never reached production, though. 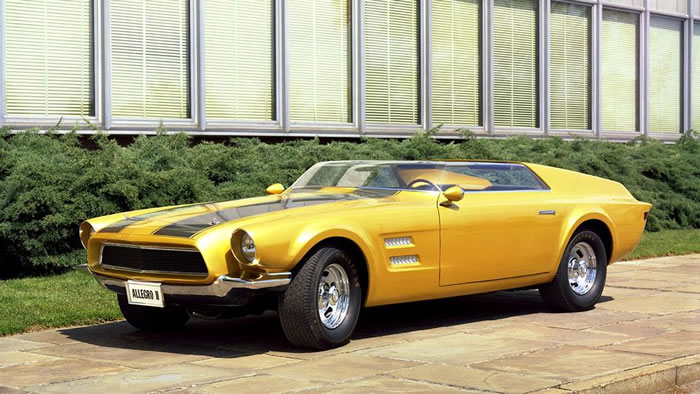 The automotive equivalent of reworking your older brother’s book report and calling it your own, the Allegro II was not merely a continuation of the style statement made by the Allegro concept of 1962, it was the same car – literally. Ford dusted off the original concept (a handsome coupe credited with establishing the Mustang’s long-hood/short-deck proportions), removed the roof, added speedster-style wraparound glass with “flying buttress” supports. Voila! Instant show car. 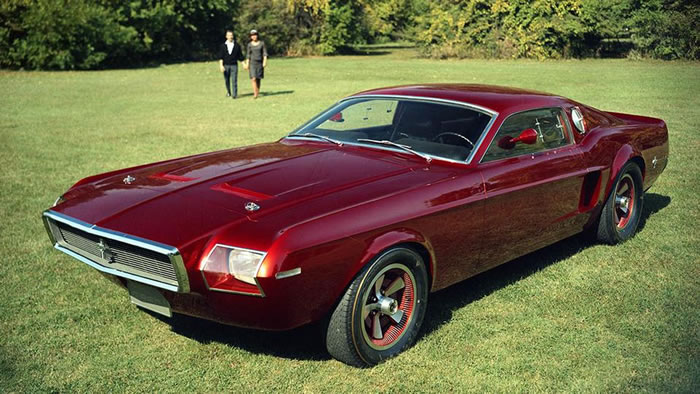 With models like the Mach I and Boss 302, the Mustang would shed its squeaky-fun image and emerge as a boulevard-blasting monster. That transition was foreshadowed by two Mach I concepts, one shown in 1967 and another in 1968. Gaping intakes toward the rear wheel arches would make the jump to production, as would the massive mag-style wheels, but the prominent fuel filler cap would not. 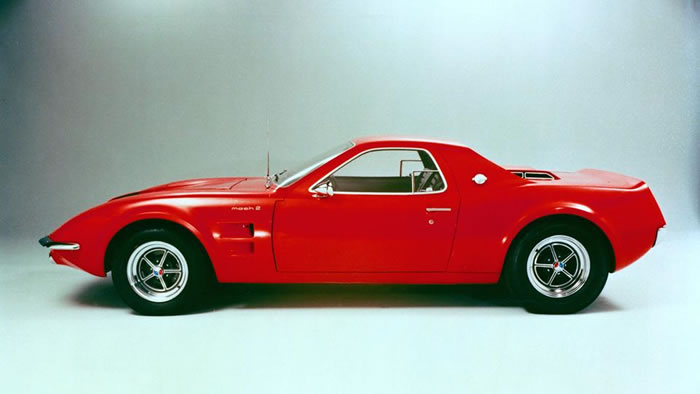 The unspeakably pretty Mach II show car was fully roadworthy, which makes its failure to reach production all the more agonizing. Essentially a Ford GT40 for the masses, the Mach 2 packed a mid-mounted 289cu-in V8 engine from the Mustang GT. Ford made no mention of the little beast’s handling, but considering that it utilized a shortened version of the standard Mustang chassis – which is to say, the Ford Falcon chassis – the term “hair-raising” comes to mind. No matter: when a car looks as lovely as this, a little misbehavior can be forgiven.

Unveiled in February 1970 with a coat of iridescent violet paint and an eye-popping purple interior, the long, low and wide Mustang Milano concept – a two-seater – presaged the grander style of the 1971 Mustang (and with its hatchback body style, it also foretold the Mustang II of 1973). Despite its Mustang forename, it was the Australian-market Ford XB Falcon coupe, which arrived later that decade, that benefited most from the Milano’s artful shape. 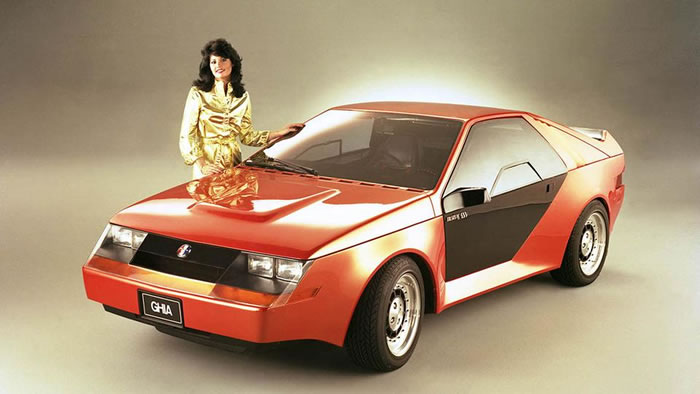 Considering the number of two-seat Mustang concept cars, it is surprising that Ford has never put one into production. Styled by the Italian design house (and frequent Ford partner) Ghia, the RSX – that’s Rallye Sport Experimental – is certainly one of the most compelling two-place Mustang show cars.

The RSX rode on a truncated version of the Mustang’s Fox platform with the wheelbase shortened by 5.6in. Power came from a turbocharged 2.3-litre four-cylinder engine, matched to a four-speed manual gearbox with an Alfa Romeo-style dash-mounted shifter.

One of a trio of full-size studies in a series called SN95, which explored design options for the 1994 Mustang, the internally named “Bruce Jenner” car – although applauded for its lean athleticism – was nonetheless deemed too tame to wear Ford’s galloping pony. The car’s softer style had already been applied with success to the front-wheel-drive Probe coupe, introduced in 1988.

Another SN95 fiberglass mockup, the “Rambo” car sat at the opposite end of the stylistic spectrum from the trim “Bruce Jenner”. With saucer-size fog lamps, angry-looking hood slats and gaping scoops on its flanks, this Stallone ‘Stang was considered far too extreme for production. For the record, the winning design, and the car that with very little revision would become the 1994 Mustang, was called the “Arnold Schwarzenegger”. 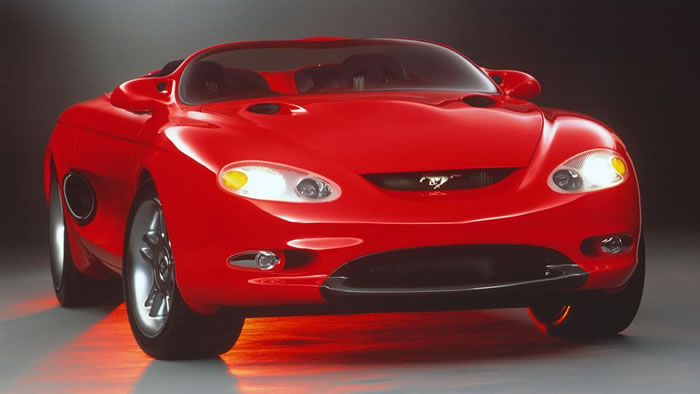 A flight of fancy designed merely to excite the faithful in advance of the debut of the production 1994 Mustang, the google-eyed Mach III featured two seats and a rounded, cut-down windscreen, along with a host of fancifully rendered retro touches, including side scoops and three-element taillamps. The car’s most serious aspect lurked behind its galloping pony emblem: a 450hp supercharged V8 engine matched to a six-speed manual transmission.

Which of these Ford Mustangs that never were would you have liked to have seen produced?