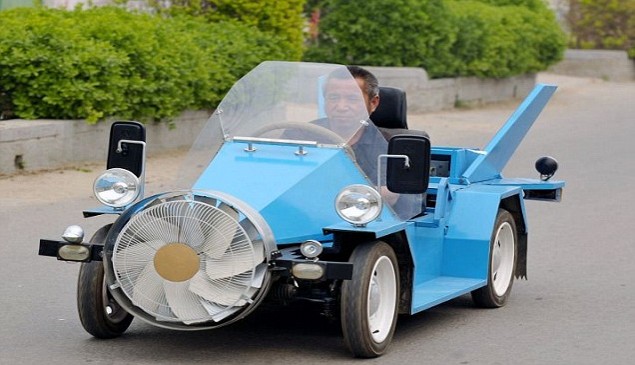 A farmer from China believes he has discovered a solution to the world’s pollution problem by creating a vehicle that runs on wind power. 55-year-old Tang Zhenping decided to create this electric after becoming increasingly worried about his country’s pollution problem.

In a small tractor workshop in the dusty village of Banjiehe, an hour outside Beijing, Tang Zhenping has been hard at work on a car he dreams will one day become the people’s popular choice.

Mr Tang’s model – built in just three months for around £1,000 – is electric, with a battery that needs to be charged from the mains.

Its engine uses scrap parts from a motorcycle and electric scooter, while its steering wheel, upholstery and headlights all come from a Chinese-made Xiali hatchback.

But what makes the one-seater special is the turbine on its nose.

When the car reaches 40mph, the blades spring into action, generating what Mr Tang claims is extra power.

He claims the turbine means his car’s battery – which would otherwise need to be recharged daily – only requires charging every three days.

Mr Zhengping also claims that the wind powered car can reach a speed of 140km/h (87mph).

However, critics say that any power generated by the turbine would be outweighed by the energy expended in propelling the vehicle forwards.

The farmer says he dreamed of building an electric car for three decades, but was unable to interest government officials or private investors.

He now hopes car manufacturers will take an interest in his prototype.

“I’m not doing this just for the money,” Tang Zhenping stated.

“I dream of seeing my car being driven on highways. I want to serve the people.”

Watch the video below to see the report from Sky News.