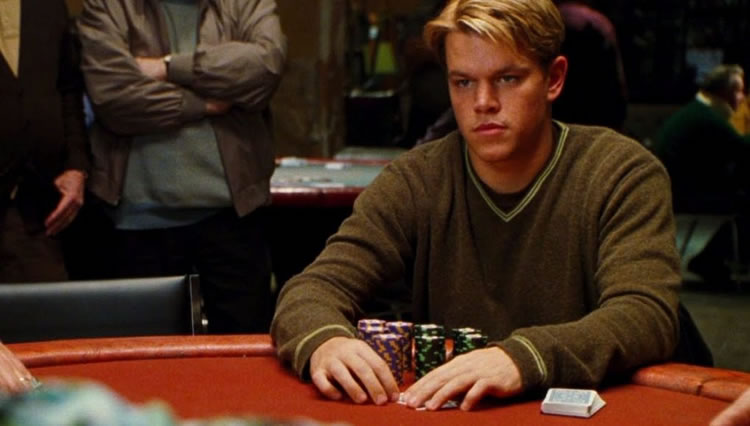 Celebrities might be famous, have more money and have their mugs pasted on every inch of some teenage girls’ bedrooms, but they are still normal people that put on their trousers one leg at a time and do not walk on water.

With that being the case, they have been known to indulge in pastimes that help them like actually pass the time and have some fun.

Some of these folks skydive, others like to swim, a few are into extreme sports, while a surprising number like to gamble. Here are a few such celebrity gamblers:

Matt Damon– Handsome Matt has even played a seasoned gambler in movies like Rounders (1998), where he tried to win enough at poker games to help out a friend. Well, it turns out that art often imitates real life and that Matt is actually one of the biggest poker lovers around. He has even been connected with an illegal poker gambling ring that involved more than a few of his fellow celebrities.

Tiger Woods– Golfing Tiger does not limit his exploits to the golfing green and has a thing for making massive bets. Rumours has this chap making 25,000 per hand wagers during blackjack games. The MGM in Vegas was even forced to institute a $1 million bet limit after he started throwing massive chunks of greenbacks around during games.

Charlie Sheen– Charlie Sheen is a pretty special case, or so an ad on a popular bingo web page might say. Renowned for his numerous vices, he is also an ardent if luckless gambler. According to his ex, Denise Richards, Charlie once had a severe gambling itch that required weekly scratching to the tune of $200,000. However, of recent, he has gone all righteous and no longer indulges in many of his old vices.

Ben Affleck– The former beau of some of the most beautiful ladies in the entertainment world loves cards a little bit too much and has a passion for poker and blackjack. Rumours once had him losing $400,000 during a poker hand, and there are stories he once got shit-faced on liquor and bet $60,000 on a blackjack hand. Fortunately for him, he won that hand and others too and was able to walk away with winnings of $800,000, while leaving tips of $150,000 for the lucky casino staff.

Michael Jordan– Surprise, surprise! His Royal Airness too loves to romance Lady Luck on games of chance! In 1993, he let the world know that he had lost $165,000 on a gambling trip. And that’s not all as he has also admitted losing $1.25 million to a dude during a golf game. Rumours even put his gambling problems as the main reason he quit the sport that brought him so much adulation.

Ray Romano– Remember “Everybody Loves Raymond”? Well, it seems the casinos do love Raymond quite a lot, as he paid them visits all the time! It eventually emerged that he had a severe gambling problem and he later sought treatment for it.

50 Cent– This rapper, actor, and entrepreneur is also a die-hard gambler. In 2012 he put down a $500,000 bet against the New York Giants ever reaching that year’s Super Bowl. He then made a reverse and backed
them to win the showpiece for a full million.

Pamela Anderson– This sexy number likes to gamble more than is good for her. In 2007, reports emerged that she had lost around $250,000 at poker in just a single night.

And that’s it, folks! It seems some celebrities have some mighty fragile feet of clay apparently! But who can blame them, given that gambling can be so sinfully sweet and rewarding!