Bonedigger And Milo Are Lion And Dog Best Friends 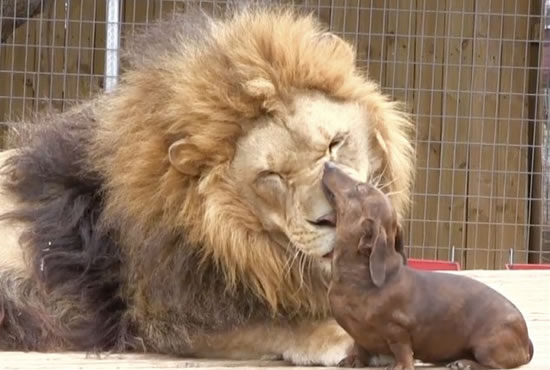 Lion and dog best friends, Bonedigger the crippled lion forms an inseparable bond with Milo the miniature sausage dog… who even helps him cleans his teeth!.

A lion and a miniature sausage dog have formed an unlikely friendship after the little dog took the king of the jungle under his wing as a cub. 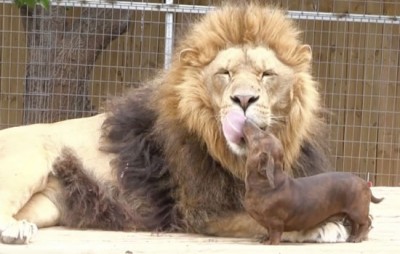 Bonedigger, a five-year old male lion, and Milo, a seven-year old Dachshund, are so close that Milo helps the lion clean his teeth after dinner. 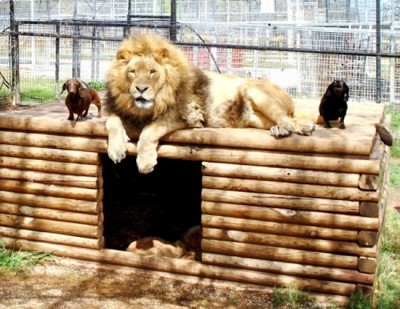 The 500lbs lion dwarfs little Milo, yet after the dog took the disabled lion into his protection as a cub, Bonedigger has rarely left his side.

When Milo and two other five-year old wiener dogs, Bullet and Angel, sensed that the cub was disabled they sought to comfort and protect him. 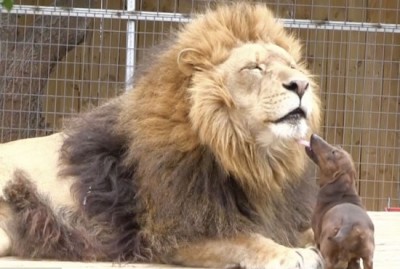 Bonedigger and his pack of dogs cuddle, feast on raw meat and play in the grounds together. 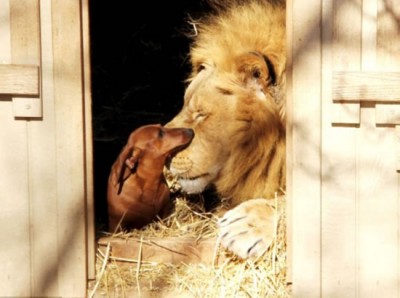 Park manager John Reinke, 43,works at the G.W. Interactive Zoo in Wynnewood where he witnessed the bond develop between the unlikely duo.
He said: ‘This friendship between an 11 pound wiener dog and a 500 pound lion is the only of it’s kind in the world ever seen.’ 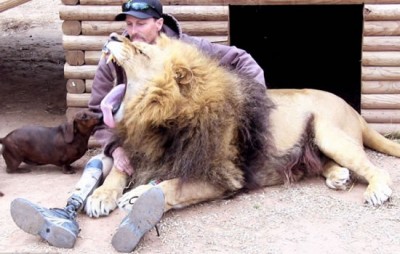 Mr Reinke, who lost both his legs after a bungee jumping accident, added that the friendship between Bonedigger and his pack is unique.
‘He wouldn’t be so friendly with other dogs – it’s all down to them being pals since he was a cub. ‘
Milo often gives his best lion impression, copying Bonedigger’s ‘puffing’ – a deafening lion growl that can be heard over a mile away.
Wild lions use it to communicate with other prides in their natural environment. 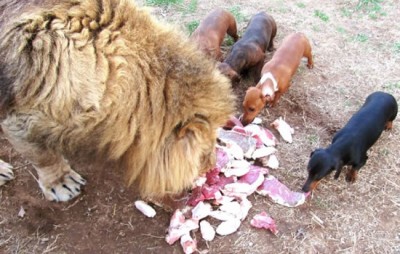 Milo and Bonedigger have been inseparable ever since the Dachshund took the disabled lion, who suffers from a metabolic bone disease, into his protection as a cub

Bonedigger and Milo are so close that the lion as the little sausage dog clean his teeth.

Milo has even learned how to growl like a lion, copying Bonedigger’s way of communicating as he would with other lions in the wild

The park was recently damaged and flooded by the recent tragedy in Moore, but is managing to provide shelter for domestic and wild creatures that are homeless because of the devastating tornadoes in Oklahoma.