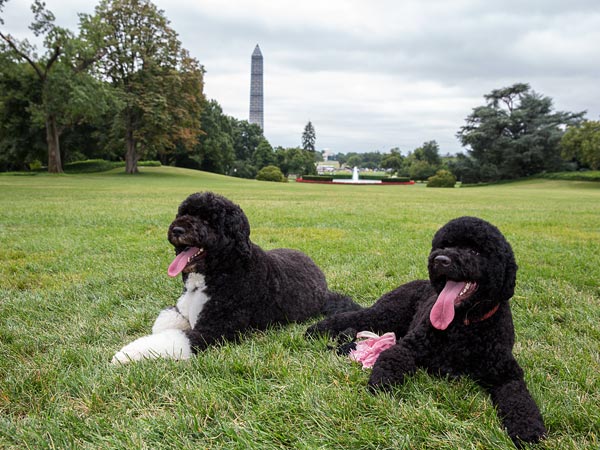 Check out these 5 facts about President Obama’s dog breed the Portuguese water dog.

A new arrival hit the White House on Monday in the form of a perfectly coiffed pup.

Sunny joins Bo, who arrived in 2009, and will likely join her big “brother” in keeping the President company in the Oval Office and on plenty of evening walks. (Watch a video of the presidential pooches.)

After Bo’s introduction, Portuguese water dogs enjoyed the biggest publicity boom since the breed’s introduction into the U.S. in the late 1960s.

Here are some interesting facts about the first family’s favorite breed.

Portuguese water dogs were historically tasked with being superior seafarers, thanks to their webbed toes.

According to the Portuguese Water Dog Club of America, the breed was prized by fishers along the coast of Portugal as both a companion and a guard dog. Dogs were set to work herding fish into nets, retrieving lost or broken nets, and even as canine couriers from ship to shore.

“When you think of their history with fishermen, they were a team—that’s the environment they thrive in,” Peterson said.

Pushed to the Brink

The Obamas nearly missed out on owning a Portuguese water dog, as the breed was pushed nearly to extinction after fishers began upgrading to more advanced equipment toward the end of the 19th century.

That is, until a wealthy Portuguese businessman named Vasco Bensaude took an interest in reviving the water-loving pups in the 1930s.

After seeking out remaining dogs from fishers along the coast, Bensaude acquired a dog named Leao and began working to revive the breed. This dog—and the puppies he eventually sired—set the current standard for the breed.

It took another 30 years for the breed to reach the U.S. (See dog pictures from National Geographic readers.)

First recognized by the American Kennel Club in the early 1980s, Portuguese water dogs are classified within the Working Group.

These dogs, according to the AKC, perform such jobs as guarding property, pulling sleds, and rescuing people and things from water. Most working dogs—Great Danes, Newfoundlands, Bernese mountain dogs, and Siberian huskies, to name a few—are unsuitable as pets for some families due to their large frames and impressive strength.

“If you look at some of the working breeds, they need a job to do,” Peterson said. “They need to do that job in conjunction to a human companion or another canine.”

Working Group dogs are intelligent and quick to learn new things, but require proper training and some sort of work to be satisfied.

“People who love Portuguese water dogs say they are like potato chips, you can’t have just one,” Peterson said. “That bubbly, happy personality is the whole package. The beautiful coat, the trainability, the need for a job. They’re just adorable.”

But, Peterson cautions, the high-energy dog isn’t a perfect fit with every family.

“Because they’re so intelligent and bright, aside from being active and needing that sort of stimulation, they need a lot of mental stimulation as well.”

Sunny should fit right in with Bo and the rest of the Obama family, though. As Peterson noted, younger dogs will mimic the behaviors of older dogs.

“Bo has been around the block a few times,” Peterson said. “Having the two of them together as playmates, I think she’ll settle in really well.”

Known as “Porties” to the people who love them, the breed is no stranger to Capitol Hill.

Late Senator Ted Kennedy—an avid lover of the breed—brought along his two pups, Sunny and Splash, to hearings and press conferences, even on boating trips. He loved the breed so much that he wrote a children’s book narrated by Splash called My Senator and Me: A Dog’s Eye View of Washington, D.C.

Sunny’s big brother Bo was a gift from Senator Kennedy to the Obama family—he even came from the same breeder that supplied the senator’s own dogs.